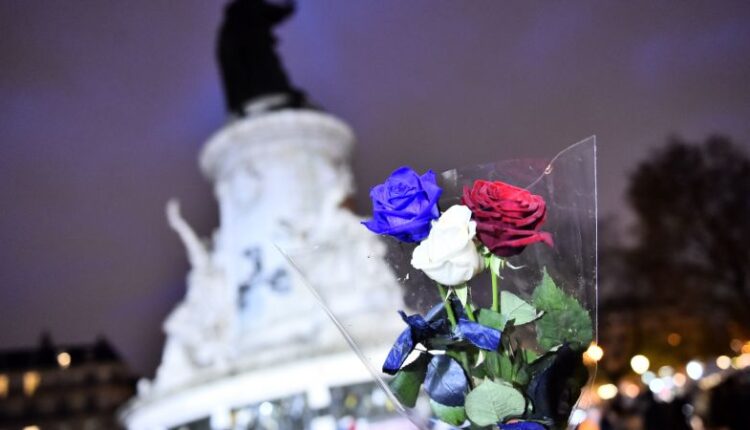 Here is a look at the November 2015 terror attacks in Paris that killed 130 people and wounded 494. The attackers, armed with assault rifles and explosives, targeted six locations across the city. ISIS claimed responsibility for the attacks.

Stade de France
– Approximately 9:20 p.m. – An explosion occurs outside Stade de France, a sports stadium in Saint-Denis, a suburb north of Paris. French President Francois Hollande is in the stadium watching France play Germany in a soccer match. He is safely evacuated. As the attacks continue to unfold over the next three hours, Hollande declares a state of emergency, closing the country’s borders.

– 9:30 p.m. – A second explosion occurs outside the stadium. Both blasts happen on the Avenue Jules Rimet.

– Four people are killed: three suicide bombers and a pedestrian.

La Petit Cambodge and Le Carillon
– 9:25 p.m. – Gunmen, armed with assault rifles, kill 15 people at the intersection of Rue Alibert and Rue Bichat, in the 10th district of Paris. Many of the victims were gathered at Le Petit Cambodge, a restaurant, and Le Carillon, a bar.

– One person inside the restaurant is seriously injured and several others are slightly injured.

Bataclan
– 9:40 p.m. – Three attackers armed with assault weapons arrive at the Bataclan concert hall. The gunmen enter the small concert hall and open fire as a performance is underway by the US band Eagles of Death Metal.

November 15-16, 2015 – French fighter jets bomb a series of ISIS sites in Raqqa, Syria. France has been conducting airstrikes against ISIS targets since September as part of a US-led coalition, but analysts say the timing of the new airstrikes is likely not a coincidence.

November 16, 2015 – In a speech to a joint session of parliament, Hollande urges lawmakers to approve a three-month extension of the nation’s state of emergency, with new laws that would allow authorities to strip the citizenship from French-born terrorists and provisions making it easier to deport suspected terrorists.

November 18, 2015 – French authorities raid an apartment building in the northern Paris suburb of Saint-Denis. The apartment is a purported hideout of the suspected ringleader of the attacks. During the raid, a suicide device is detonated and bullets are exchanged for almost an hour. One floor of the building collapses, and there are three fatalities.

November 19, 2015 – It is confirmed that the body of Abdelhamid Abaaoud, the ringleader of the Paris attacks, was found in the rubble of the apartment that was raided on November 18. A female relative of Abaaoud, Hasna Ait Boulahcen was also killed in the raid. The third person killed, who is believed to have detonated the suicide device, has not been identified.

November 20, 2015 – French Prime Minister Manuel Valls announces that the death toll has risen to 130. Additionally, he says that in the past seven days, 793 searches have been carried out across France. During these searches, 174 weapons have been seized and 107 people detained.

November 23, 2015 – In Belgium, authorities charge a suspect, arrested during raids in the last 24 hours, with participating in activities of a terrorist group in connection with the Paris attacks.

November 23, 2015 – France launches its first airstrikes from an aircraft carrier against ISIS. With the addition of carrier-based aircraft to its fleet, France now has 38 aircraft carrying out bombing raids against ISIS.

December 17, 2015 – Officials briefed on the investigation tell CNN the terrorists used encrypted apps, including Telegram and WhatsApp, to plan the attacks.

March 18, 2016 – Suspect Salah Abdeslam is wounded and captured following a gun battle with authorities in Belgium. Four others are also arrested in the anti-terror raid.

April 8, 2016 – Suspect Mohamed Abrini is arrested in Belgium along with two other people during a police sweep in the Anderlecht district of Brussels.

November 8, 2016 – French officials tell CNN they have identified the suspected coordinator of the attacks as Oussama Atar. He is believed to have directed the Paris attacks and the March 22 Brussels attacks. The attacks in the Belgian capital killed 32 people and injured more than 300.

November 12, 2016 – The day before the first anniversary of the Paris terror attacks, the Bataclan reopens with a performance by Sting.

April 23, 2018 – Salah Abdeslam, the only survivor of the cell alleged to have carried out the attacks, is sentenced to 20 years over a shootout with Belgian police in March 2016. He is found guilty of attempted murder in a “terrorist context,” a spokesman for the Brussels prosecutor says.

June 27, 2019 – German authorities report that a week ago, a 39-year-old man from Bosnia was arrested in connection with the 2015 attack. He will be extradited to Belgium.

November 4, 2019 – French investigations into the attacks end. Prosecutors have a month to present their case before the judges decide on a trial date. Of the 14 indicted, 11 are in custody.

March 16, 2020 – Twenty people, including Abdeslam, are ordered to be put on trial for the attacks.

September 8, 2021 – The trial begins for the twenty individuals involved with the attacks, including Abdeslam. The trial is expected to last nine months, with nearly 1,800 plaintiffs and more than 300 lawyers involved.

June 28, 2022 – Life for Paris, the main organization for survivors and victims’ families announces that it will begin to wind down and close on November 13, 2025, the ten-year anniversary of the attacks.

June 29, 2022 – Verdicts are handed down.
– Abdeslam, accused of physically carrying out the attacks, is found guilty of all five counts he was charged with and sentenced to life in prison without parole.
– The 19 other suspects, six tried in absentia, are found guilty on all counts.
– Mohamed Abrini is sentenced to life in prison with a 22-year minimum term.
– Only Farid Kharkhach is convicted of a lesser charge than he initially faced.

Portraits of the victims can be found here and here.

Abdelhamid Abaaoud:
– Deceased. Killed during the November 18th raid of an apartment building in the northern Paris suburb of Saint-Denis.
– Belgium citizen, spent time in Syria.
– Ringleader of the attacks. He directed three attackers in the Bataclan by phone from a few blocks away, according to French terrorism analyst Jean-Charles Brisard.
– Joined ISIS in 2014. He has been implicated in the planning of a number of terror attacks and conspiracies in Western Europe, notably a plot broken up in Belgium in January 2015.
– French air strikes were carried out against an ISIS training camp in Raqqa in October 2015 in an effort to kill Abaaoud, a French counterterrorism source told CNN.

Ibrahim Abdeslam:
– Deceased. Le Monde has reported that Abdeslam was the suicide bomber who detonated near the cafe on Boulevard Voltaire. The Paris prosecutor’s office has identified that attacker as a 31-year-old French citizen but hasn’t disclosed his name.
– French citizen living in Belgium.
– Brother of Salah Abdeslam.
– “Ibrahim tried to go to Syria and was sent back by the Turks in the beginning of 2015,” Belgian Prosecutor Eric Van der Sypt told CNN. “It was after that that we questioned him.” Investigators released Ibrahim and his brother Salah Abdeslam in February after they denied they wanted to go to Syria.

Salah Abdeslam:
– In custody. Captured March 18, 2016, following a gunbattle with authorities in Belgium.
– Belgium-born, French national.
– Brother of Ibrahim Abdeslam.
– Abdeslam had been questioned by French police earlier but was not detained, a source close to the investigation into the Paris attacks said. He was driving toward the Belgian border when police stopped and questioned him hours after the attacks.
– Investigators believe he may be the driver of a black Renault Clio that dropped off three suicide bombers near the Stade de France the night of November 13.
– Sentenced in April 2018 to 20 years for a shootout with Belgian police before he was arrested.
– Sentenced June 29, 2022, to life in prison without parole.

Mohamed Abrini:
– In custody. Arrested on April 8, 2016, during police raids in Brussels.
– Abrini drove a car that was found abandoned in a Paris neighborhood where one of the November 13 shootings occurred, according to police. He had dropped off one of the bombers who attacked the Stade de France.
– Authorities said Abrini is also suspected to have played a role in the Brussels airport attack on March 22. He was seen in surveillance footage at the airport, walking alongside the two suicide bombers.
– Sentenced June 29, 2022, to life in prison with a 22-year minimum term.

Ahmad Al Mohammad (not his real name):
– Deceased. One of three bombers who detonated themselves at the Stade de France.
– Held an emergency passport or similar document and falsely declared himself to be a Syrian named Ahmad al Muhammad, born on September 10, 1990.
– Arrived on the Greek island of Leros on October 3rd among numerous Syrian refugees, according to a French senator who was briefed by the Ministry of the Interior. He was allowed to enter Greece and from there moved to Macedonia, then Serbia and Croatia, where he registered in the Opatovac refugee camp. Eventually, he made his way to Paris.

Samy Amimour:
– Deceased. Identified as one of the suicide attackers who carried out the massacre at the Bataclan.
– Amimour was known to have links to terrorists and had been the subject of an international arrest warrant since 2013, after violating the judicial supervision under which he had been placed.

Bilal Hadfi:
– Deceased. One of three suicide bombers outside the Stade de France.
– Resident of Belgium.

Foued Mohamed-Aggad:
– Deceased. One of the three suicide bombers armed with assault rifles at the Bataclan.
– French citizen.
– Identified using DNA from members of his family.

Ismael Omar Mostefai:
– Deceased. Identified as one of the three suicide bombers armed with assault rifles at the Bataclan.
– French citizen.
– Mostefai was believed to have been radicalized in 2010 but had never been accused of terrorism.
– Mostefai entered Turkey legally in 2013. The next year, France provided four names of terror suspects, and a subsequent investigation revealed Mostefai was associated with that group. In December 2014 and in June 2015, Turkey requested more information on Mostefai, but France did not respond. There is no record of Mostefai leaving Turkey.

Identity unknown:
– Deceased. One of three bombers who detonated themselves at the Stade de France.

Premarket stocks: What midterm elections could mean for the US economy