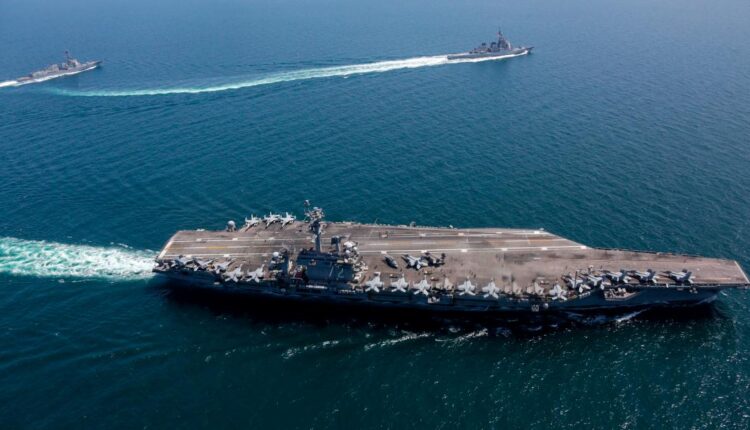 Hot spots including Taiwan, North Korea, the South China Sea, the India-China border and the Kuril Islands have all seen a Ukraine effect, as Russia’s war accelerates regional security concerns — while providing lessons that major players in Asia are evaluating daily.

That has left other Pacific powers, especially Japan, wary.

Japanese officials have pointed out that 90% of their country’s energy needs are imported via the water around Taiwan, tying Japan’s economic stability to Taiwan’s autonomy.

The United States is also committed to providing for Taiwan’s self-defense, although not to defending it with US troops.

That’s where lessons from Ukraine come in, both for the US and its allies — and for China.

“Simply put, it will be enormously difficult for US leaders to convince China they are willing to risk a war over Taiwan that might turn nuclear,” Peter Harris, an associate professor of political science at Colorado State University, wrote this week in a paper for the Defense Priorities think tank.

“This is especially true in light of President Biden’s unambiguous refusal to commit US troops to Ukraine because of the looming threat of nuclear war with Russia,” Harris wrote.

But, Harris argues, NATO allies and much of the rest of the world have stood with Ukraine, via sanctions on Russia and arms for Ukraine.

That could make China wary of any move on Taiwan for fear of what actions nations around the region could take against Beijing, he says.

“China must be left in no doubt that Japan, Australia, South Korea, the Philippines, and others would be forced to rethink their national security strategies in the shadow of an enlarged and aggressive Chinese state,” Harris wrote.

And that will be part of Biden’s mission over the next week — to unify the region around Taiwan as a deterrent to any Chinese belligerence.

The Kim Jong Un regime has staged a record number of missile tests this year, and there are indications it could be getting ready to test a nuclear weapon for the first time since 2017.

The missile testing comes after negotiations between North Korea and the US over Pyongyang’s nuclear program stalled following failed summits between Kim and former US President Donald Trump.

“Some observers suggest that North Korea ratchets up tests to get Washington’s attention and restart dialogue. There is more evidence that Pyongyang is focused on improving military capabilities to deter, threaten and extort other countries,” says Leif-Eric Easley, a professor at Ewha University in Seoul.

That was a page in the Russian playbook before it eventually invaded Ukraine, and provides a lesson for the Korean Peninsula, Easley says.

“Russia’s aggression shows that the cost of war is almost always greater than the price of peace, not only because of the lives shattered and resources expended, but also because leaders tend to overestimate their ability to achieve military and political objectives while underestimating long-term unintended consequences,” he says.

According to Easley, Biden can reduce the threat from North Korea by playing to the strength of America’s partnerships in the Pacific.

The Kuril Islands, referred to as the Southern Kurils by Russia and the Northern Territories by Japan, were captured by Soviet forces following Japan’s surrender to the Allies in 1945.

The resulting disagreement over who has rightful ownership of the islands has soured relations between the two countries, contributing to their continued failure to sign a World War II peace treaty.

But the Russian invasion of Ukraine has raised tensions between Tokyo and Moscow to some of their highest levels since World War II. That’s because Japan has been full-throated in its condemnation of the invasion — largely following the Western line against Russia, including expelling Russian diplomats, imposing sanctions on Moscow and even donating supplies to the Ukrainian military.

This comes after Russia has upped its military profile in the Western Pacific, including testing missiles in the waters between Japan and Russia and joining with the Chinese navy for an exercise circumnavigating much of Japan.

“Given all this, Japan’s threat perception on its northern flank has changed substantially,” says Robert Ward, Japan chair at the International Institute for Security Studies.

And the rising tensions in the north have created what Ward calls “an arc of risk” for Japan to its west, from the Kurils in the north, south to the North Korean missile threat and further south to China, around Taiwan and around the Senkaku/Diaoyu Islands, claimed by both Beijing and Tokyo as sovereign territory.

This is a concern for Biden because, through a mutual defense treaty, the US is committed to defend any part of Japanese sovereign territory. Wavering in the slightest in these areas concerning its No. 1 ally would raise concerns about US commitments elsewhere in the world, including to NATO allies still worried what Russia’s next move in Europe might be.

China’s claim to almost all of the 1.3-million-square-mile South China Sea has been a continuous source of strain between Washington and Beijing in recent years.

But the war in Ukraine, along with increasing tensions around Taiwan, North Korea and the Kuril Islands, has turned the thermostat down a bit in the South China Sea.

Collin Koh, research fellow at the S. Rajaratnam School of International Studies in Singapore, notes that in 2022, the US Navy seems to have curtailed its freedom of navigation operations (FONOPS), in which US warships sail close to Chinese-occupied contested islands — with only one such operation in January.

“It appears that the Biden administration might have elected to switch from the previous militarized focus on (the South China Sea) approach to one that’s more based on geoeconomics,” Koh said.

He notes a recent White House meeting with leaders of the Association of Southest Asian Nations (ASEAN) yielded economic, development and health care commitments, rather than military ones.

In fact, the closest to a security initiative was committing a US Coast Guard cutter and training team to the region, Koh said.

But Russia’s military struggles in Ukraine have lessons for China, too, Koh said.

Russia has not gained air superiority over Ukraine, and Koh said Beijing could easily face a similar problem trying to protect militarized islands in the Spratly Islands chain in the southern South China Sea.

“The line of communication — air and sea — from the coastal hubs along China’s southern mainland and these outposts would be too long, and vulnerable to interdiction unless they’re able to secure air and naval dominance,” he said.

“Even if the Chinese might gain the initial upper hand by seizing some features in (the South China Sea), holding them securely in the long run becomes uncertain,” Koh said.

The decades-long standoff along the Line of Actual Control (LAC), the ill-defined border between India and China in the Himalayas, might be the most complex of the military issues facing Biden on his trip to Asia.

A bloody clash between Indian and Chinese troops on the LAC in 2020 has pushed India, which has long had Russia as its major weapons supplier, closer to the United States.

India has also aligned itself with the US, Japan and Australia in the Quad, an informal group of countries that many see as an effort to push back against China’s influence in the Indo-Pacific region.

But New Delhi’s historically close ties with Moscow, and the need to keep oil and gas imports from Russia intact — as well as military supply chains — have seen India stopping short of sanctions against Russia, something the other Quad members have been at the forefront of.

Harsh V. Pant, professor at Kings College London and director at Observer Research Foundation in New Delhi, notes two factors from Ukraine that are likely to keep India tilting toward the United States.

One, intelligence, surveillance and reconnaissance provided by Washington and its allies have helped Ukraine stop and now push back Russia on the battlefield.

India has had a similar understanding with the US in monitoring and understanding Chinese military capabilities and what’s happened in Ukraine will push that effort forward, Pant says.

And two, Russia’s role as a supplier of around half of India’s military weaponry comes into question.

“India will have to look very carefully at the sourcing of its hardware,” Pant says.

“If Russia is so embroiled in its own wars, where are the maintenance and spare parts (for India) going to come from?”

Washington and its allies are the more likely provider both of the weapons themselves, but also aiding in technology transfer for India to manufacture its own modern armaments, Pant says.

And that would be a likely avenue for an agreement to come out of the meeting of Quad leaders in Tokyo next week.