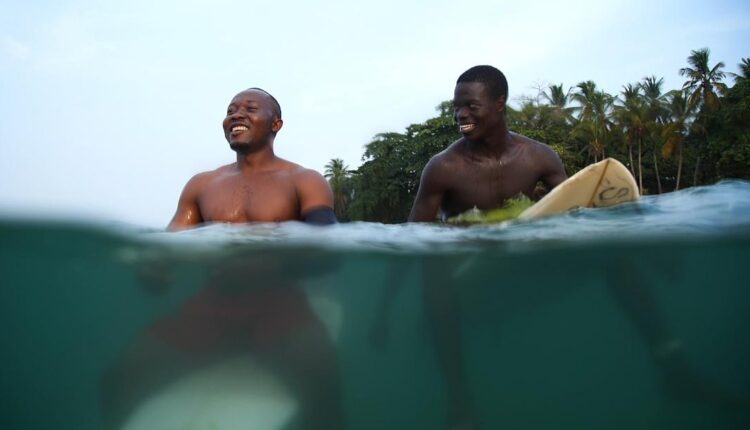 
(CNN) — Nestled between Ivory Coast, Sierra Leone and Guinea, Liberia is the oldest republic in Africa. But despite its historic legacy, in the minds of many outsiders the West African nation is still more commonly associated with civil war and convicted war criminal Charles Taylor.

But at the end of the second civil war in 2003, as Liberia was on the cusp of democratically electing the continent’s first female head of state, a different narrative was emerging in the fishing village of Robertsport; one that would ultimately change the culture of this tiny seaside community on the border of Sierra Leone.

“After the war in 2003, some Americans came to Robertsport, where they started surfing our waves,” recalls local surfer Philip Banini. “(They) came across a Black guy, Alfred Lomax, who was the first Liberian surfer, and they taught him the sport. And that was how he too started sharing it with the locals around here.”

Lomax, now the country’s most recognized and decorated surfer, taught Banini, who in turn has taught countless others, growing the community from one into many.

Today, inside Banini’s guesthouse hangs a sign that reads “When nothing is going right, surf a left” — a reference to the left break for which Robertsport is famous. The village is now one of Liberia’s three main surfing destinations, the others being the capital Monrovia and Harper on the border with Ivory Coast. Between the palm trees and long stretches of sandy beach which hug the Atlantic Ocean, every day the water is dotted with surfers.

To borrow a surfing expression, “the stoke is real.”

Surfers at sunset look out to sea from Robertsport’s beach.

Surfing has a long history in Africa. The earliest account, from Ghana in the 1640s, even predates the earliest record from surfing’s spiritual home of Hawaii. The parallel development and history of African surfing is less well known, and the sport remains less established than other parts of the world. But a renaissance is underway.

Today, Robertsport is a world apart from when Canadians Kent Bubbs and Landis Wyatt first set foot on its beach. Since relocating to Liberia 15 years ago, Bubbs has witnessed how the community of roughly 4,000 people has grown to include over 60 local surfers. “There are more and more surfers every year,” Bubbs tells CNN. “The kids who used to surf originally are now having kids, and those kids are surfing — it is becoming generational. We often see multiple family members out surfing together.”

Among them are the former men’s national surf champion Oscar Comney and his younger brother, Massalley “Samon” Comney, whom Oscar taught how to surf.

Through their NGO Universal Outreach Foundation, Bubbs and Wyatt have played an active role in helping to grow the Liberian surf community through surf tourism initiatives. They also find sponsors for the country’s only national surf competition, which they run in collaboration with Robertsport’s Surf Club.

“The idea behind (the competition) was simply to give the youth and kids of Robertsport something to look forward to,” Bubbs explains. “Surfing has become a place where the young people can go and enjoy the company of their friends, compete against each other and be in an environment where they can express themselves and work through some of the challenges of life with like-minded people.”

Massalley recently won the Robertsport under 18s competition and plans to challenge his brother for the adult title in the future. One of eight children, the 17-year-old juggles working at Banini’s guest house and selling handmade bracelets to tourists to support his high school tuition.

“I really love surfing because I feel like I’m the best man on planet Earth,” says the young up-and-comer.

He’s also not the only one making a splash; Irene George is the only local female surfer from Robertsport and current women’s competition champion.

Her skills have earned her the nickname “Butterfly,” because she moves through the waves like she is flying. After a break from surfing to pursue studying hospitality in Monrovia, she is now back in the water and eager to prove herself.

She hopes to inspire more Liberian women to take up surfing but acknowledges there are some challenges. “When (I) go around saying, ‘I want to teach you how to surf,’ they say, ‘I don’t know how to swim.’ Once you can swim you can surf, so we need to teach (people) how to swim first,” she says. It’s George’s plan to someday open a swim and surf school of her own called Liberian Future Surf School.

Irene George is the only female surfer in Robertsport and current women’s champion.

Reputation and infrastructure could pave the way for Liberia to join South Africa and Morocco as key African surfing destinations.

Robertsport is looking to tap into an international surfing market expected to be worth more than $4.8 billion by 2027, and riding its waves are tourists from all over the world. Despite tourism setbacks — first, from a two-year Ebola outbreak that began in 2014, followed by the Covid-19 pandemic — Banini says things are looking up. These tourists bring with them skills to share along with surf boards, wax and dollars to contribute to the growing surf tourism economy.
Some tourists donate boards to locals before flying home, while others are provided by Swiss NGO Provide the Slide, which collects old boards and ships them to countries all over West Africa. But with only one repair shop in all of Liberia, run by Bubbs, it’s not unusual to see local surfers happily sharing broken and battered boards.

Bubbs recalls a time when the only visitor accommodation in Robertsport was camping on the beach, but that has changed as more guest houses have opened. Soon the Robertsport Surf Club will have its own property, which will be used to run surf lessons, fishing trips and eventually offer accommodation too, diversifying opportunities in what is still a fishing-dependent local economy.

In just a matter of years, surfing has become the heart of this community. “It’s about time that the country sees the importance of focusing on the surfers in Robertsport,” says Banini. “I want them to know that there’s a sport called surfing in Liberia, and there are a lot of Liberians involved in it.”

North Korea is facing a Covid disaster. What does that mean for Kim Jong Un?