‘All That Breathes’: Delhi’s bird saviors become the subject of a hit documentary 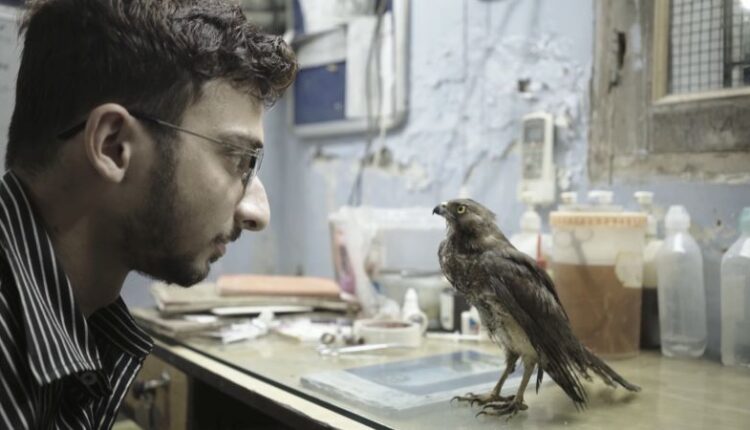 Nowhere in the world is the black kite, a medium-size bird of prey from the hawk family, found in such high concentrations. Its numbers have grown in recent decades, buoyed by abundant waste from the city’s booming meat processing industry and mounting rubbish at the vast Ghazipur landfill. Today there are possibly more than 100,000 kites, estimates environmentalist Nadeem Shehzad. But human activity is causing significant harm to the raptor, with evidence strewn across streets and rooftops.

The main culprit is another type of kite — one made of paper and thread rather than flesh and bones, says Shehzad. Flying paper kites is a popular pastime in the city and many participants traditionally use sharp thread and attempt to cut the lines of each other’s kites. But the thread can also cause grievous damage to birds.

A city-wide problem ultimately arrives at one door. That door, below a sign that reads “Wildlife Rescue,” belongs to Shehzad and his brother Mohammad Saud. For over two decades, they have worked to repair the damage done to the black kite, one creature at a time.

Now the brothers have become the subject of “All That Breathes,” the first film to win top documentary prizes at both Sundance and Cannes film festivals. Ahead of its release, they and director Shaunak Sen sat down for separate interviews with CNN to discuss its creation and their ongoing mission.

Shehzad and Saud grew up in their Muslim neighborhood watching the faithful toss meat to swirling kites and other birds of prey, an act believed to eat away the sins of the feeder. But kites were not always able to receive treatment at bird hospitals, as some, due to religious stipulation, could not feed the carnivorous animal meat. The first injured bird they found, in the mid-90s, was turned away. By 2003, with the problem becoming clear, the duo decided to intervene.

Despite initially lacking medical training, the former bodybuilders set up a clinic in a basement next to a small soap dispenser manufacturing operation. With the help of local veterinarians they gained skills. “We got another bird and another bird,” says Shehzad. They built an enclosure. Eventually, veterinary hospitals from across Delhi started sending them black kites for treatment.

Sen entered their orbit in 2018, returning home after a fellowship at Cambridge University and set on directing a documentary on human-wildlife interaction.

“I usually get a bit wary of the bleeding-heart sentimentality of a lot of environmental discourse,” he says. “Whereas the brothers (have a) wry resilience” – despite, in the director’s mind, the duo having “front row seats to the apocalypse.”

In the film, we fall in sync with the brothers and their assistant Salik Rehman, who arrive at the basement each afternoon with boxes containing dozens of injured birds.

Shehzad says they receive birds with breathing and lung problems, blindness, head injuries and skeletal deformations. Then, mysteriously, there are others presenting no symptoms at all – “they could be the ones getting affected by the pollution,” he says.

The vast majority of cases can be tied to kite flying, however. Sharp glass-coated lines have also caused human deaths, and have been banned in Delhi since 2016, though they haven’t disappeared. “When this thread collides with a bird, it gives them very deep cut wounds – sometimes they even sever their bones,” says Shehzad.

The brothers work late into the night; delicate wing repairs and plastic surgery to fix bones, suture muscles and reconnect tendons. Around 80% of surgeries are a success, and approximately 50% of birds that come to Wildlife Rescue are rehabilitated, says Saud. Since they began, the brothers estimate they have treated close to 26,000 birds.

Every day they do the same with equal fervor, in a city that remains largely indifferent to the bird – which, after all, is far from endangered. What keeps the brothers going? “The whole film is an exploration of this very question,” says Sen, “the fact that it is a kind of Sisyphean task.”

In the documentary, Shehzad names Charles Darwin and Isaac Newton among his heroes. “I’ve devoted my whole life to this,” he says. While those titans of science might have changed how the world sees itself, one gets the impression the brothers see no such garlands for themselves. “Delhi is a gaping wound, and we’re a Band-aid on it,” Shehzad says in voiceover.

“They would say that this is religious credit that they feel that they’re earning,” Sen adds. “(But) there’s no one simple reason that one can give – and there shouldn’t be, because it’s their life, and no life has a one-line slogan.”

The documentary is a profile of the brothers, but also the birds and the city. A series of shots throughout the film collapse the space between man and nature: A group of people around a fire slip out of focus and we see a snail up close, sliding across the screen; caterpillars curl up in a puddle while the reflection of an airplane moves across the water. “It was a fever dream of looking for animals for six months,” Sen recalls. But it underscores the point made by one of the brothers, that “man is the loneliest animal, trapped in its species.” We can forget – or neglect – everything else we co-exist with.

There are signs, however, that the brothers’ work situation is improving. Shehzad has received further specialist training in wildlife rehabilitation in the US. And, as we glimpse at the end of the documentary, the kites have a new rooftop aviary, while the hospital has moved from the basement into a rented office. “The birds are in a more hygienic environment,” says Shehzad. “We’re in a much, much better situation.”

Birds continue to flow through Wildlife Rescue’s doors, and they could use the city’s help. “If someone in Delhi wants to do anything for the wildlife, stop flying kites,” Shehzad says – and if anyone sees leftover kite string hanging from trees, pick it up and dispose of it. Almost all birds they treated this summer were dehydrated, a product of aggressive heat linked to climate change, he adds, and advises people to leave out water if they can.

As for whether his film has the ability to change hearts and minds, Sen is cautiously optimistic. “If it just makes you exit the theater and look up,” he says, “that, I’d be happy with.”

“All That Breathes” debuts in UK cinemas on October 14 and in the US on October 21.