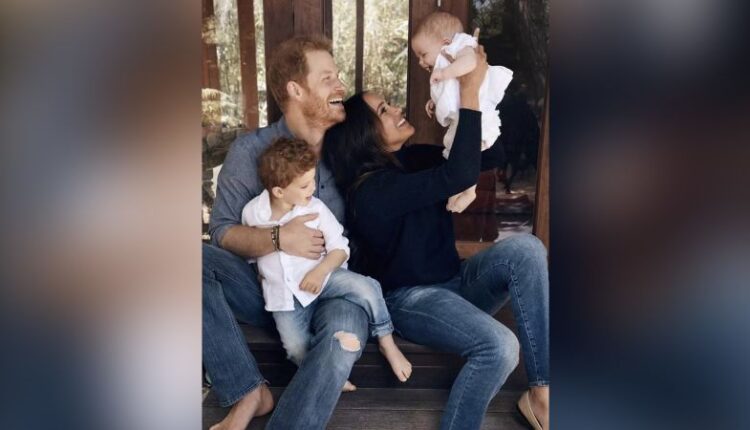 The change is a result of conventions created over a century ago. Under rules set out by George V in 1917, the grandchildren of the monarch automatically receive royal titles.

As grandchildren of King Charles III, Archie and Lilibet now have the right to be prince and princess, whereas they did not immediately qualify as the great-grandchildren of the Queen.

Meghan last year made a damning suggestion that this title might be denied to Archie because of his mixed-race ancestry. In an interview with broadcaster Oprah Winfrey, the Duchess of Sussex said a member of the royal family had expressed “concerns and conversations about how dark his skin might be when he was born.”

“That was relayed to me from Harry. Those were conversations that the family had with him,” Meghan added, but declined to reveal who was involved in those conversations. “That would be very damaging to them,” she said.

The duchess said these comments were made at the same time as the couple were told Archie wouldn’t have security or an official title. She said there had also been “conversations” while she was pregnant about the convention being changed once Charles became King, meaning Archie would lose his right to a title.

She insisted to Winfrey that her concern over her son’s right to the title of prince was linked to her desire for him to be given police protection. Lilibet was born after the interview was conducted.

Members of Parliament observe a minute of silence in memory of the Queen on Friday.

A woman wipes her eyes outside Buckingham Palace on Friday.

Members of the Honourable Artillery Company fire a gun salute outside the Tower of London on Friday.

Charles greets well-wishers as he walks by the gates of Buckingham Palace on Friday.

Flowers are left on the gate at Buckingham Palace.

Wardens stand outside the gates to Windsor Castle on Friday.

People watch the gun salute at the Tower of London.

A woman cries Friday after signing a book of condolences at the Convent Palace, the official residence of the governor of the British territory of Gibraltar.

Students gather to pay their respects for the Queen at the Royal Russell School in London on Friday.

People take photos with their phones as an image of the Queen is displayed in London’s Piccadilly Circus on Thursday, September 8.

A notice is placed on a fence outside Buckingham Palace, announcing the Queen’s death on Thursday. “The Queen died peacefully at Balmoral this afternoon,” the statement read. “The King and The Queen Consort will remain at Balmoral this evening and will return to London tomorrow.”

A rainbow is seen near Windsor Castle as the Union Flag is lowered after the Queen’s death.

People react outside Buckingham Palace after news of the Queen’s death.

Prime Minister Liz Truss delivers a statement outside No. 10 Downing Street on Thursday. “She has been a personal inspiration to me and to many Britons,” Truss said. “Her devotion to duty is an example to us all.”

A child places flowers outside the Palace of Holyroodhouse in Edinburgh, Scotland.

Television crews and media work outside Buckingham Palace on Thursday.

Crowds gather on the Queen Victoria Memorial in front of Buckingham Palace on Thursday.

People pay their respects outside Buckingham Palace on Thursday.

Buckingham Palace told CNN at the time of Archie’s birth in 2019 that the Duke and Duchess of Sussex had chosen not to use any title at all for their son.

Meghan rejected that suggestion in her interview with Winfrey, saying: “It’s not our decision to make, right.”

There has been no indication that the King intends to make any changes to the convention.

Harry and Meghan announced in 2020 that they would step back from royal duties and “work to become financially independent.” It was agreed that they would remain part of the family, but the couple renounced their HRH titles. It is unlikely that Harry, Charles’ son, will be offered a royal office unless he and Meghan resume their duties.

While several members of the royal family, including Harry, traveled to Balmoral Castle on Thursday after Buckingham Palace announced “concern” surrounding the Queen’s condition, Meghan did not accompany her husband.