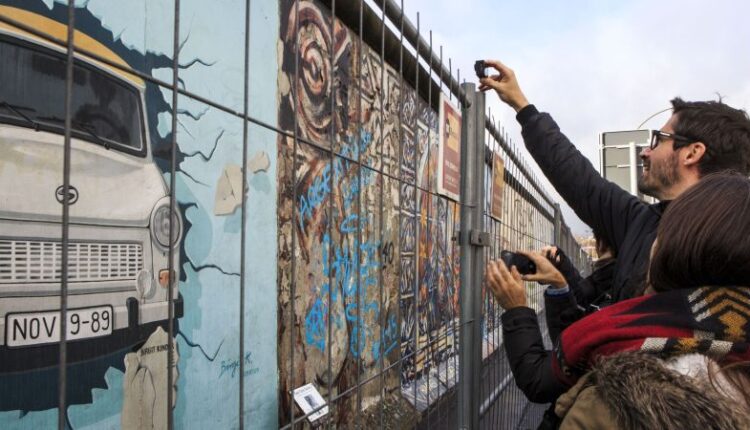 Here’s some background information about the Berlin Wall, which enclosed West Berlin from 1961 to 1989, in an attempt to prevent East Germans from fleeing to the West. It became a symbol of East/West relations during the Cold War.

The Berlin Wall began as a border of barbed wire fencing and evolved into a fortified concrete barrier with armed East German border guards.

East Germany militarized the entire border with the West, laying more than one million land mines and deploying around 3,000 attack dogs.

The wall between East and West Berlin was nearly 12 feet high and approximately 27 miles long, with 302 guard towers and 55,000 anti-personnel explosive devices (landmines).

To prevent attempts to scale the wall or escape by digging underneath, the wall was reinforced with barbed wire, spikes, metal gratings, bunkers and vehicles made into obstacles.

A wide-open area of dirt and sand, a buffer zone between the two walls, became known as “no man’s land” or the “death strip,” where guards in watch towers could shoot anyone trying to escape.

On border grounds, at least 140 people died either by gunshot, by fatal accident while trying to escape, or suicide.

The most famous border crossing was known as Checkpoint Charlie.

February 4-11, 1945 – In the face of Germany’s defeat in World War II, the Allies’ Yalta Conference agrees to divide Germany into four zones of occupation: Great Britain, France and the United States occupy the western, northwestern and southern portions, and the Soviet Union occupies the eastern. Berlin, located in Soviet territory, is also divided into east and west zones.

August 18, 1961 – US Vice President Lyndon B. Johnson and retired General Lucius Clay fly to Berlin as a show of US support for West Germany.

June 26, 1963 – US President John F. Kennedy speaks to a crowd in West Berlin at the Rathaus Schöneberg (city hall) on Rudolph Wilde Platz: “Today in the world of freedom the proudest boast is ‘Ich bin ein Berliner’ (‘I am a Berliner’) all free men, wherever they may live, are citizens of Berlin. And therefore, as a free man, I take pride in the words ‘Ich bin ein Berliner.’”

September 3, 1971 – Talks between the US, Britain, France and the Soviet Union lead to the Four-Power Agreement on Berlin, a decree to improve conditions for West Berliners and ease travel to and from West Germany and West Berlin, as well as travel by West Berliners to the East. It also normalizes Berlin’s status as a divided city.

June 12, 1987 – In a speech at the Brandenburg Gate, US President Ronald Reagan challenges General Secretary of the Communist Party of the Soviet Union Mikhail Gorbachev, leader of the USSR, to “tear down this wall!”

October 18, 1989 – Communist Party chief Honecker is ousted and is replaced by Egon Krenz.

November 4, 1989 – More than a half million people participate in a pro-freedom rally in East Berlin, demanding free elections.

November 6, 1989 – A preliminary law passes that gives all citizens travel and emigration rights, with restrictions. Travel time is still limited, and authorities can arbitrarily deny permission to travel.

November 7, 1989 – The East German cabinet resigns. Almost half of the members of the Politburo are removed and replaced the next day.

October 3, 1990 – East and West Germany officially become reunified under the name the Federal Republic of Germany.

August 14, 2018 – A Berlin council member announces that a previously unknown section of the wall was recently discovered in a residential section of the city. The wall had been covered by overgrown bushes, which is how it had remained hidden for so long.

Pelosi angers China but Taiwan, not the US, may pay the higher price