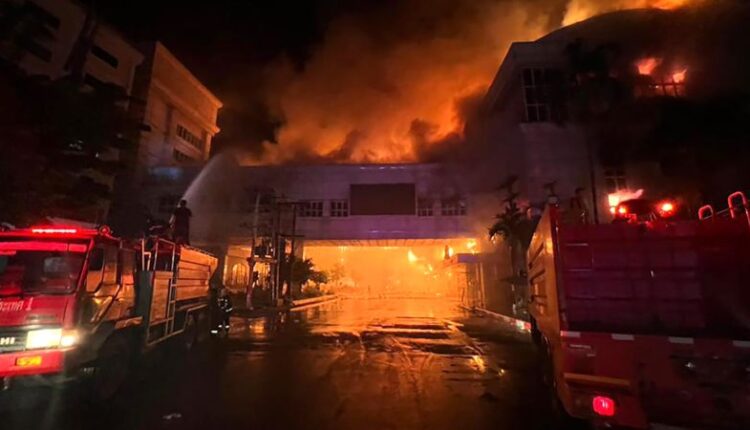 Victims jumped to their deaths from burning buildings in a frantic attempt to escape a deadly fire that engulfed a casino in Cambodia Wednesday, Thai rescue workers said.

The rescuers said at least 11 people were killed but the death toll was expected to rise from the blaze at the Grand Diamond City Hotel and Casino in Poipet, a city that borders Thailand.

Patcharin Thaenthong, leader of a Thai rescue team who responded to emergency calls from Cambodian authorities, said some of the victims appeared to have died from smoke inhalation. “When we arrived, we could not get in because the fire had already taken over (most of) the buildings,” he said.

Approximately 700 Thai citizens were rescued and sent to hospitals in Thailand, according to authorities.

Photos from the scene show huge bright amber flames and plumes of smoke rising from the complex.

“Two people died immediately when they hit the ground and around four to five (others) broke their legs,” he said.

Peerapan said he also saw at least nine more bodies inside the buildings.

He suspects the fire started at a lower floor restaurant before spreading to other parts of the compound. “Some people ran to the rooftop, (thinking) that the Cambodians might have a rescue crane to help – but they didn’t have one,” he said.

Weather conditions may have helped the fire to spread, he added.

“It was very windy last night,” he said. “The fire spread up quickly to the upper floors and then to every side, engulfing the whole building.”

He said he also saw a building lose electricity and the lights go off.

It remains unclear whether the fire has been fully extinguished.

Patcharin, the rescue leader, said he could still see large amounts of smoke, but was no longer seeing flames.

The cause of the fire remains unclear and the hotel’s narrow and elevated layout had made it difficult to fully assess the status of the blaze, he said.

Poipet, a transport hub between Cambodia’s Siem Reap and the Thai capital Bangkok, is known for its multiple casinos and is home to many Thais who work in the city’s gambling industry.

Almost all forms of gambling are illegal in Thailand, though it remains a popular vice in the country with many Thais crossing the border to gamble legally.

The Games That Rescued Me From My Post-Elden Ring Slump