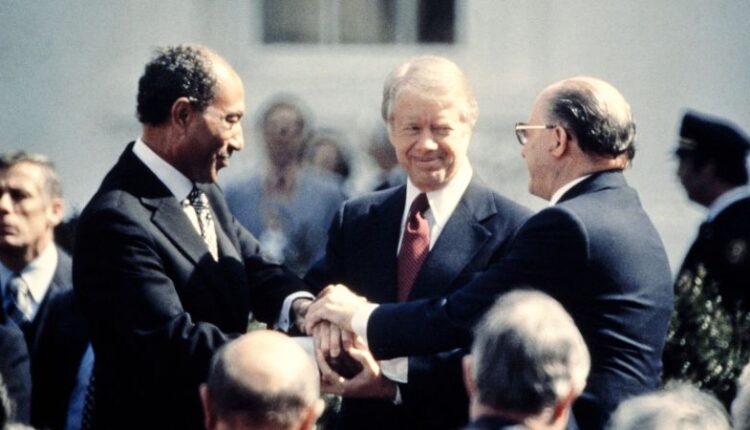 Here’s a look at what you need to know about the Camp David Accords.

Called for a formal peace treaty to be signed between Israel and Egypt, within three months.

Called for establishment of diplomatic relations between the two countries.

Called for Israeli withdrawal from the Sinai Peninsula in stages, to be completed within three years.

Called for an end to Israeli settlements in the West Bank.

Did not settle the question of East Jerusalem.

November 9, 1977 – Sadat announces that he is “ready to go to the Israeli parliament itself” to resolve the conflict in the Middle East. This is despite the fact that the two countries do not have diplomatic relations and are technically still at war.

November 15, 1977 – Through the United States, Israel formally extends an invitation to Sadat to visit the country.

November 19-21, 1977 – Sadat makes a historic first visit by an Arab head of state to Israel. During the three-day visit, Sadat meets with Begin, addresses the Knesset, and lays a wreath at a monument to Israeli war dead.

December 14, 1977 – Egypt hosts Israel, the US and the United Nations at a peace summit in Cairo.

September 6, 1978 – The peace summit begins in Camp David, Maryland. After meeting formally on the first day of the 13-day summit, Sadat and Begin do not meet again during the negotiations. Instead, Carter acts as a go-between.

November 1978 – PLO leader Yasser Arafat travels to Moscow to discuss organized opposition to the agreement. The PLO and the Soviet Union release a statement describing the accords as “a collusion at the expense of and behind the backs of the Arabs aimed at helping Israel entrench [itself] on captured Arab land, including Palestine, and prevent implementation of the Palestinians’ inalienable national rights.”

March 26, 1979 – In a ceremony in Washington, Egypt and Israel formally sign a peace treaty ending 31 years of war between them.