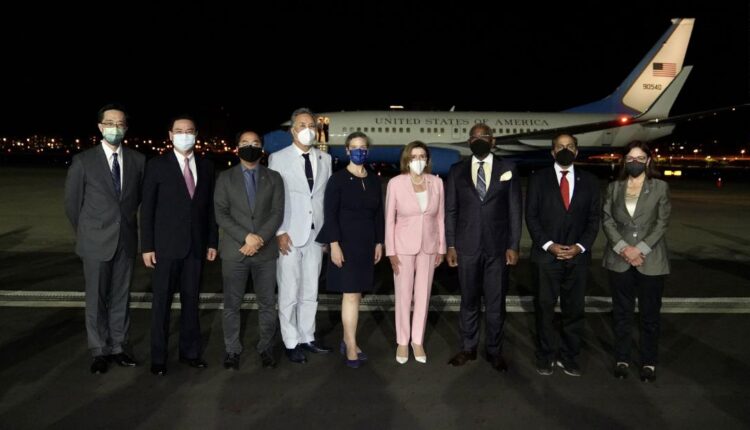 An announcement from the People’s Liberation Army Eastern Theater Command said beginning Tuesday night a series of exercises would be held on the sea and in the air surrounding Taiwan, the self-governed island that China says is its sovereign territory.

“This action is a solemn deterrent against the recent major escalation of the negative actions of the United States on the Taiwan issue, and a serious warning to the ‘Taiwan independence’ forces seeking ‘independence,'” Col. Shi Yi, spokesman for the Eastern Theater Command, said in a statement.

The Eastern Theater is one of the five joint commands of the People’s Liberation Army (PLA) with jurisdiction over China’s eastern coastal provinces of Fujian and Zhejiang, which sit opposite and above Taiwan.

China’s Defense Ministry said the PLA was “on high alert and will launch a series of targeted military operations to counteract the situation, resolutely defend national sovereignty and territorial integrity, and resolutely thwart the interference of external forces and ‘Taiwan independence’ secessionist schemes.”

In an unusual move, Chinese state media posted on Twitter a map showing six areas around Taiwan where it said the PLA would conduct drills, including live-fire exercises from Thursday through Sunday.

The announcements came after a US Air Force plane carrying Pelosi landed in Taiwan’s capital of Taipei, marking the first time a US House speaker has visited Taiwan in 25 years.

China did not specify what the exercises would entail or what units would be involved.

The PLA has been active with exercises around the region in the days leading up to the Pelosi visit. It typically stages drills at this time of year to mark Army Day, the founding of the PLA.

Pelosi and the congressional delegation that accompanied her said in a statement that the visit “honors America’s unwavering commitment to supporting Taiwan’s vibrant democracy.”

“Our discussions with Taiwan’s leadership will focus on reaffirming our support for our partner and on promoting our shared interests, including advancing a free and open Indo-Pacific region,” the statement said.

The House speaker wrote an op-ed that published in The Washington Post after she landed, arguing that her trip demonstrated the US commitment to Taiwan under threat from China. “In the face of the Chinese Communist Party’s accelerating aggression, our congressional delegation’s visit should be seen as an unequivocal statement that America stands with Taiwan, our democratic partner, as it defends itself and its freedom,” Pelosi wrote.

The US supplies Taiwan with defensive weaponry under the terms of the decades-old Taiwan Relations Act, but it remains deliberately vague on whether it would defend Taiwan in the event of a Chinese invasion — a policy known as “strategic ambiguity.”

China’s ambassador to the United States, Qin Gang, told CNN’s John King that Beijing was within its sovereign rights to take action over Pelosi’s visit.

“China has every right to defend its sovereignty and territorial integrity. We are fully justified to do what we must. The current situation is created purely by the US side, so of course it has to bear the responsibilities,” Qin said.

The incursions were made by 10 J-16 fighter jets, 8 J-11 fighter jets, one Y-9 electronic warfare aircraft, one Y-8 electronic intelligence aircraft, and one KJ-500 airborne early warning and control aircraft, the Taiwanese Defense Ministry said in a statement on Tuesday night.

In response, the Taiwanese military issued radio warnings and deployed air defense missile systems to monitor the activities, it added.

China frequently sends warplanes into Taiwan’s self-declared ADIZ. The highest number of incursions ever recorded was on October 4 last year, when 56 military planes flew into the area on the same day.

An ADIZ is unilaterally imposed and distinct from sovereign airspace, which is defined under international law as extending 12 nautical miles from a territory’s shoreline.

The sweetest job opening ever: $78,000 a year to taste candy while sitting on your couch