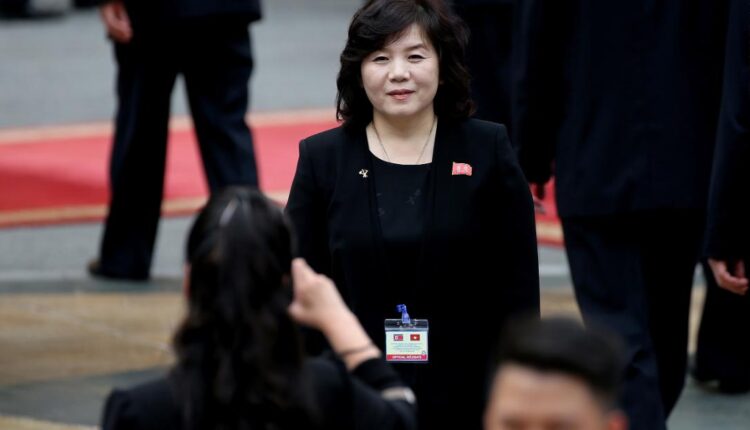 Her appointment comes at a time of tension on the Korean Peninsula as North Korea aggressively ramps up its weapons testing program in defiance of United Nations sanctions.

On Tuesday, US Special Representative for North Korea Policy Sung Kim warned that Washington believes North Korea is preparing to conduct a seventh nuclear test — which would be its first since 2017.

The International Atomic Energy Agency also said Tuesday that North Korea is “readying their nuclear test site,” warning the situation surrounding Pyongyang’s nuclear program “is quite concerning because we have seen a fast-forward in every line,” based on the activity at the Punggye-ri site.

North Korea has conducted 17 missile launches this year alone, including two successful tests of presumed intercontinental ballistic missiles.
South Korea and the US put on an aerial show of force to North Korea on Tuesday, flying 20 fighter jets over waters west of the Korean Peninsula in response to Pyongyang’s recent missile tests.
It came a day after the two allies fired eight missiles into nearby waters, which they said demonstrated that “even if North Korea provokes with missiles from multiple locations, (South Korea and the US have) the ability and readiness to immediately strike with precision.”

The KCNA report of the plenary meeting Saturday made no mention of North Korea’s nuclear capability, missile tests, the US or South Korea.

However, Kim reaffirmed the principle of “power to power,” which “will not yield a single inch,” in defending national sovereignty, and presented military tasks for North Korea’s forces and defense research department, KCNA said.

Who is Choe Son Hui?

She first appeared in the media in 1997 as the interpreter for North Korean delegates in four-party nuclear negotiations with its neighbors. She again joined the negotiation during six-party talks in the 2000s.

Choe played a key role during North Korea’s summits with the US, leading an aggressive negotiation effort aimed at the US leadership of former President Donald Trump. Her statements published on North Korean state media alternated between threatening a “nuclear showdown” to offers of dialogue.

She accompanied North Korean leader Kim for summits in Singapore in 2018 and Hanoi a year later, sitting alongside him at the negotiation table.

In her latest statement in March of last year, she demanded the US cease its “hostile policy” against North Korea, including its joint drills with South Korea.