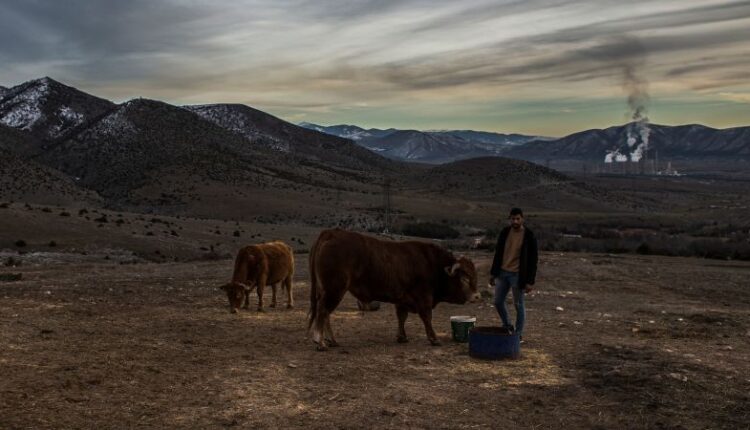 Dimitris Mitsaris opens his garage door and the smell of fermenting grapes emerges, as the first morning light bounces off dozens of steel tanks. Mitsaris and his family live here, in Agios Panteleimonas, a mountainous village of just 800 residents in northern Greece, and have made their home into a small winery. “I don’t even have electricity here yet,” Mitsaris says with a laugh.

It’s funny to Mitsaris because just until December last year, the 40-year-old had spent 17 years of his life working the coal mines for the state-run Public Power Corporation (PPC) to keep the lights on in people’s homes. He finally gave up coal for wine, understanding that the fossil fuel was on its way out.

Mitsaris, whose father also worked in coal mining, bought 44 acres of vineyard. But he’s now wondering if he made the right choice – coal here is refusing to quit.

“I’m afraid about the future,” he said. “I have two young daughters to bring up.”

Coal is the most polluting of fossil fuels and is the biggest single contributor to the climate crisis, and Greece had been trying hard to wean off it. But the country – alongside other European nations – is delaying those phaseout plans in response to the energy crunch, which has turned into a full-blown crisis since Russia launched its war on Ukraine.

Just a year ago, Greece was confident it could close all existing coal-burning plants by 2023. It planned to build one last coal plant this year in the wider region where Mitsaris lives, Western Macedonia, which generates more than half the nation’s electricity. The new plant, Ptolemaida 5, would in 2025 then run on natural gas, another polluting fossil fuel, but one that is generally less carbon-intensive than the lignite, or brown coal, found in this part of Greece.

That whole timeline is now up in smoke.

The deadline to end the use of coal in all existing plants has been delayed from 2023 to 2025, and Greek Prime Minister Kyriakos Mitsotakis recently suggested the new Ptolemaida plant will realistically need to burn coal until at least 2028. And Greece is planning to hike its coal mining output by 50% over the next two years to make up for the dearth of natural gas, as Vladimir Putin tightens the taps flowing to the EU.

Already the changes are glaring. In June 2021, coal generated 253.9 gigawatt hours (GWh) of electricity. This June, coal was responsible for 468.1 GWh, nearly twice as much.

And this is while the country has been battling wildfires on the mainland and its islands, fueled by a scorching heat wave supercharged by climate change – which comes mostly from humans’ burning of fossil fuels like coal. The fires have left homes in ashes, people have been rescued from beaches and business owners on islands like Lesbos are facing an economically painful holiday season.

Major life choices, like where to live and work, are difficult to make when the government’s plans keep changing. For Mitsaris, leaving his village where he was born and raised isn’t an option right now.

“My wife used to work in a dairy factory, which also closed few years ago. They offered her a job in Athens but back then my salary was enough to support the whole family, so we decided to stay,” he said. “If I knew that we would end up in the situation we are now, I would have gone to Athens back then.”

The Greek government is trying to convince people that its return to coal is only temporary. But coal’s resurgence is tempting people in Western Macedonia back into the industry.

The PPC energy company has offered steady employment to thousands of people in Western Macedonia, where almost 1 in 5 are jobless.

Here – where everyone refers to coal as a “blessing and a curse” – a return to the fossil fuel can make all the difference between staying and leaving.

Already, so many have left for bigger cities, or even moved abroad, to find new lives.

In terms of the transition away from coal, Greece had been something of a success story. Before Russia’s invasion of Ukraine, Greece only relied on coal for around 9% of its energy supply, down from 25% just six years ago. It was the first country in the coal-dependent Balkans to announce a near-term target to end use of the fossil fuel.

But the transition has always had its challenges – mainly, what opportunities can the country offer to former workers in coal towns?

In Western Macedonia – which provides 80% of Greece’s coal – the PPC has expropriated dozens of villages so that it can mine the coal beneath them, moving entire communities to the peripheries. And they were the lucky ones.

During this awkward in-between phase – when coal is still being mined but its years are numbered – residents in the village of Akrini find themselves unable to move, even as everything around them crumbles.

Residents here have been in a dispute for more than a decade with the PPC, saying they are entitled to compensation that will help them relocate from the village, which has for years been exposed to high levels of ash from the coal operations that surround them. They successfully lobbied for the right to be relocated, which is now enshrined in a 2011 law.

The PPC told CNN in an email that it was not responsible for the people in the village, and did not answer follow up questions when presented with the law that states they are entitled to relocation assistance by 2021.

Charalambos Mouratidis, 26, doesn’t really know what to do next.

Like Mitsaris, he has sought to make a new life after leaving a job with the PPC at a coal mine, where his father also worked. But Mouratidis never had the same kind of job security as his dad. He worked shifts for eight months on a short-term contract cleaning the ash from the machinery inside the mine. The instability, low pay and the heavy impact of the toxic ash on his health pushed him out of the industry.

He now runs a cattle farm, which sits on a hill overlooking Akrini as plumes of smoke and steam rise from the chimneys and cooling towers of the coal plants all around it in the background.

On top of his cattle farming, he works a second job for a solar panel company, typically putting in 13 hours a day between them to make ends meet.

Working for the solar panel company is a green job that provides Mouratidis with some extra income. But solar expansion is also taking up more and more land, leaving less for cultivation or grazing, so getting permission to expand farmland in Akrini is near impossible, he said.

Besides the solar farms, all other infrastructure projects in Akrini have been canceled. The village is being left to slowly die.

“I started farming, hoping to have some kind of a more stable future, and now even that effort is at stake,” Mouratidis said. “Everyone has reached a dead end in this village.”

The Greek government has devised a 7.5 billion euro ($7.9 billion) plan to help the country transform from a fossil fuel-based economy to a green innovative nation. Its Just Transition Development Plan, as these are known across the European Union, has received 1.63 billon euros in EU funding.

Western Macedonia is a focus in the plan and should receive plenty of the money, partly to become a center for renewables in the country. And while the plan is welcomed by a lot of people here, many doubt it can all be achieved in the six years before the last coal plant is to go offline.

Mouratidis is skeptical the money will help him at all.

“I’m not sure that much of it will reach people like me, who run small businesses. Some money will end up with the ones who openly support the current government and the majority of it will stay with those who manage these funds,” he said. “This is what history has shown us. Even during Covid-19, the support given to big companies and businesses was much higher than the support we got.”

But not all hope is lost. As many workers turn from coal to agriculture, some EU support is trickling through. Just a few kilometers from Akrini, Nikos Koltsidas and Stathis Paschalidis are trying to create sustainable solutions for those who have lost their jobs in the green transition, and who are willing to get involved with sheep and goat farming.

Through their “Proud Farm” initiative, they act as incubators for Greeks who want to farm in sustainable ways, offering them access to training and knowledge around the newest technologies available to them.

“We want to create a network of self-sustainable farms, with respect to the environment and the animals, which will demand very low capital from new farmers,” Paschalidis said, his sheep bleating in the background.

Koltsidas said he wanted to spread the word to the local population that farming isn’t what it used to be, and can provide a stable future. “It doesn’t require the effort it did in the past, where the farmer had to be on the farm the whole day, grazing the animals or milking them with their hands,” he said.

“To those thinking about going back to working in coal, they should look at all the regions that are thriving without it,” he said. “There’s no need to stay stuck in these outdated models of the PPC.”

Pelosi stops in Hawaii and reveals her Asia plans. But no mention of Taiwan