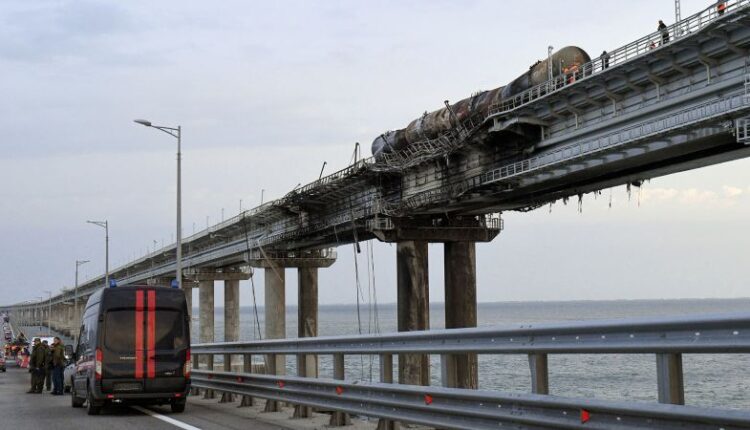 Eight people have been detained over Saturday’s blast that damaged the only bridge connecting annexed Crimea with Russia, marking a critical juncture in Moscow’s invasion of Ukraine.

“At the moment, five citizens of Russia, three citizens of Ukraine and Armenia, who participated in the preparation of the crime, have been detained as part of a criminal case,” the report by FSB and the Russian Investigative Committee said, according to RIA Novosti.

“The explosive device was concealed in rolls with polyethylene construction film on 22 pallets with a total weight of 22,770 kilograms,” the FSB report added, RIA Novosti also reported.

Ukraine has yet to publicly comment on the new claims by Russia’s FSB and Investigative Committee.

The Crimea bridge explosion over the weekend served as a major blow to what the Kremlin calls its “special military campaign” in Ukraine, as Moscow counters low morale among Russian troops and thinning military supplies.

The bridge is strategically important because it links Russia’s Krasnador region with the Crimean peninsula, which Russia annexed from Ukraine in 2014 in a move roundly criticized by the international community.

It is a critical artery for supplying Crimea with both its daily needs and supplies for the military. Over the last few months, dozens of Russian military convoys have used the bridge, carrying vehicles, armor and fuel.

Limited car and rail traffic has restarted on the bridge following the blast. However, larger vehicles like heavy trucks, vans and buses are traveling by ferry.

Russian officials had earlier claimed the explosion was caused by a truck blowing up on the road bridge. The report said the explosive device had been sent from the port of Odesa in early August this year through Bulgaria, Georgia and Armenia, Russian state media TASS reported.

The blast also sparked a feverish response from the Kremlin, which used the explosion to justify a wave of brutal airstrikes across Ukraine Monday in scenes that echoed the early days of the invasion.

At least 19 people were killed and more than 100 injured during the attacks, which targeted critical energy infrastructure across Kyiv and other major Ukrainian cities, according to Ukrainian officials.

Further east, rescuers searched through rubble in the city of Zaporizhzhia Sunday after Russian missile strikes killed at least 13 people and wounded 89 others. Ukrainian Foreign Minister Dmytro Kuleba described the fatal shelling as an act of “revenge” from Russian President Vladimir Putin following recent defeats on the battlefield.

International leaders also pledged their support for Ukraine in the wake of the strikes.

The European Union’s foreign policy chief, Josep Borrell, tweeted Monday: “Such acts have no place in (the) 21st century.”

Belgium’s Prime Minister Alexander De Croo tweeted that the “bombardment of Kyiv and of civilian targets in many other cities is a reprehensible act by Russia.”

Ukrainian President Volodymyr Zelensky invoked G7 leaders Tuesday to help his country establish an “air shield” against aerial attacks. He also called for stiffer sanctions against Russia and reiterated his demand for Russia to be declared a terrorist state.

Zelensky’s plea came a day after Putin threatened further “harsh” responses that correspond “to the level of threat to the Russian Federation, have no doubt about it,” while accusing Kyiv of “terrorism.”

Earlier, Ukrainian officials had gloated over the bridge blast but did not claim responsibility for the attack.