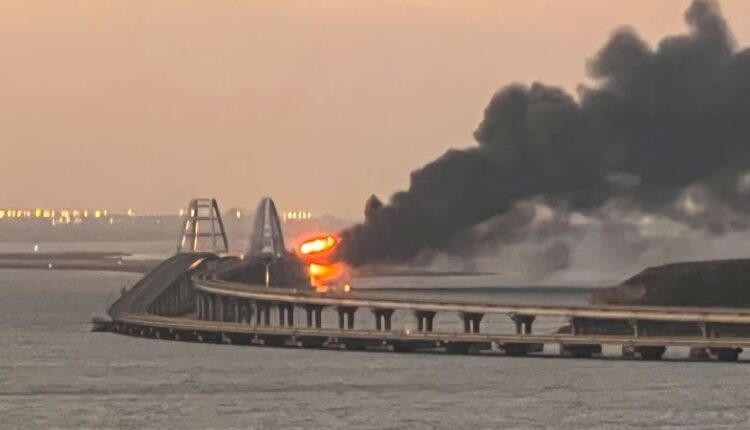 In a major blow for Russian President Vladimir Putin, a huge explosion early Saturday severely damaged the only bridge connecting the annexed Crimean Peninsula with the Russian mainland, crimping a key supply route for Moscow’s faltering war in Ukraine.

The blast collapsed part of the roadway on the Kerch Strait road-and-rail bridge – opened by Putin himself in 2018 – images and video from the scene showed. At least three people were killed in the explosion, Russian officials said, citing preliminary information.

The exact cause of the blast at Europe’s longest bridge is yet to be confirmed. Russian officials said a truck exploded, causing Crimea-bound sections of the bridge’s roadway to fall. A subsequent fire engulfed a train of fuel tanks on a separate, adjacent rail portion of the bridge.

Also on Saturday, the Russian Defense Ministry announced the appointment of a new commander for what it calls its special military operation in Ukraine, according to Russian state media.

The new commander, General Sergey Surovikin, first saw service in Afghanistan before commanding a unit in the second Chechen war. He has commanded several motorized rifle divisions and was instrumental in Russia’s operations in Syria, and while there, was awarded the title of Hero of the Russian Federation.

His appointment is the latest promotion in a military career that began in 1983 but has also led him to be sanctioned this year by the European Union.

The long-term effects on the use of the bridge weren’t immediately clear. Russian officials said a limited amount of car traffic had resumed on undamaged sections of the bridge’s roadways by Saturday evening and that train services were resuming on the bridge’s railways.

The first passenger train resumed travel across the bridge on Saturday evening, traveling from the Crimean peninsula to Krasnodar Krai in southern Russia, Russia’s Ministry of Transport said in a statement late Saturday.

But trucks were being asked to take ferries across the strait, state media reported.

The damage to the roadway appeared to be severe, with westbound lanes crippled in at least two places. Video and images from the 19-kilometer (11-mile) bridge appeared to show a portion of the roadway had fallen into the water.

Crimea raised its terror-threat level to yellow on Saturday across much of the peninsula after the explosion, according to the Russian-appointed head of Crimea, Sergey Aksenov, in a statement on his Telegram channel.

Aksenov also said that the ferry service in Crimea will operate free of charge and will be subsidized from the state budget. He added that all local hotels have confirmed free accommodation for tourists who were unable to leave the peninsula on Saturday.

The first ferry with passengers left the port in Kerch for the coast of Kuban, a region in southern Russia separated from the Crimean Peninsula by the Kerch Strait.

The lights on the bridge are set to be restored over Saturday night so that repairs can be carried out around the clock, according to a statement published on the website of the Russian Cabinet of Ministers, citing Deputy Prime Minister Marat Khusnullin.

According to the statement, divers will start their work on Sunday morning and check all the supports of the bridge. Once all results are received, a decision will be made to open traffic on the bridge for buses and heavy vehicles.

An official in Crimea blamed “Ukrainian vandals” for the explosion. Some Ukrainian officials gloated over the incident without directly claiming responsibility – even announcing commemorative stamps will be made. Russian Foreign Ministry spokeswoman Maria Zakharova said that “the reaction of the Kyiv regime to the destruction of civilian infrastructure testifies to its terrorist nature.”

The bridge is strategically important because it links Russia’s Krasnodar region with the Crimean Peninsula, which was annexed by Russia from Ukraine in 2014 in a move condemned by the international community.

It is a critical artery for supplying Crimea with both its daily needs and supplies for the military. Over the last few months, dozens of Russian military convoys have used the bridge, carrying vehicles, armor and fuel.

If the Russian military’s use of the bridge is hampered, its supply lines to forces in southern Ukraine would become more tenuous, especially when combined with Ukrainian advances southward into Kherson region, north of Crimea.

Russia has used the Crimean railroads to ferry supplies to forces in Kherson, and several rail hubs in both Crimea and Kherson have been attacked by long-range Ukrainian rockets.

Sergey Aksenov, the Russian-appointed Head of Crimea, said “two spans of the roadbed of the part [of the bridge] from Krasnodar to Kerch, collapsed” after the explosion, and that a train’s fuel tanks caught fire.

Preliminary information indicates three people were killed in the incident, “presumably the passengers of a car that was next to the blown-up truck,” Russia’s Investigative Committee said on Telegram.

At least two bodies, that of a man and a woman, were recovered from the water, and their identities were being established, the investigative panel said.

Records indicate the truck that exploded belonged to someone in Russia’s Krasnodar region; investigators are checking the owner’s home and trying to determine the truck’s route, the investigative committee said.

The bridge spans the Kerch Strait, which connects the Black Sea to the Sea of Azov, on which sit key Ukrainian ports, including Mariupol. For Russia, the bridge symbolizes the physical “reunification” of Crimea with the Russian mainland.

No further details on the timing or scope of the commission have been announced.

RIA Novosti said that there are “no projections for the timing of the restoration of the Crimean bridge yet,” citing Putin’s press secretary Dmitry Peskov.

An official in Crimea placed blame on “Ukrainian vandals.”

“Ukrainian vandals somehow managed to get their bloody paws on the Crimean bridge. And now they have something to be proud of, in 23 years of their economic activity, they did not manage to build anything deserving of interest in Crimea. But they did succeed in damaging the roadbed of the Russian bridge,” Chairman of the State Council of the Republic of Crimea Vladimir Konstantinov said.

“Such is the whole essence of the Kiev regime and the Ukrainian state … Of course, the causes of the accident will be investigated, and the damage will be repaired swiftly,” he added.

Ukrainian officials taunted Russia over the explosion without directly acknowledging that Ukraine was responsible for the attack.

“Air defense of the Russian Federation, are you sleeping?” the Navy of the Armed Forces of Ukraine said on Facebook, alongside a video showing a section of the bridge’s road that had been completely destroyed.

“Russian illegal construction is starting to collapse and catch fire. The reason is simple: if you build something explosive, sooner or later, it will explode. And this is just the beginning,” David Arakhamia, the head of Ukrainian president Volodymyr Zelensky’s party in parliament and a member of Kyiv’s negotiating team with Russia, said in a Telegram statement about the incident.

“I will not wish you a good day, because it is already wonderful. The Kerch bridge is done,” the official, Igor Smelyansky, said.

On Thursday, Oleksii Hromov, a senior official with the General Staff, said that since September 21, Ukrainian troops had managed to advance 55 kilometers in the north-east, “establish control over 93 settlements, [and] take control over more than 2,400 square kilometers.”

Hromov appeared to be referencing gains in Kharkiv region that were made before September 21 but only confirmed later.

In an interview in August, a senior Ukrainian military commander said the Kerch bridge was a legitimate target.

“This is a necessary measure in order to deprive them (Russia) of the opportunity to provide reserves and reinforce their troops from Russian territory,” Maj. Gen. Dmytro Marchenko said in an interview with RBC-Ukraine.

The Kerch bridge is able to handle 40,000 cars a day and to move 14 million passengers and 13 million tons of cargo per year, state news agency RIA Novosti reported when Putin opened the bridge in 2018.

Russian special forces masked in camouflage without unit insignia seized Crimea in a lightning operation in February 2014. Initially, Russia denied that its troops had carried out the mission. Later, it acknowledged that the so-called “little green men” were indeed Russian units. The West responded swiftly with crippling economic sanctions.

Russia constructed the bridge after the annexation, spending an estimated $3.7 billion.

The damage done Saturday will be a psychological blow to Moscow – the bridge was the physical expression of Putin’s objective to bind Ukraine to Russia. The day it opened in 2018, he led a triumphant convoy over the bridge, driving a truck festooned with flags.

Analysis: What the bridge explosion means for Putin and his war effort

After the bridge opened, the United States condemned its construction as illegal.

“Russia’s construction of the bridge serves as a reminder of Russia’s ongoing willingness to flout international law,” according to a US State Department statement at the time.

“The bridge represents not only an attempt by Russia to solidify its unlawful seizure and its occupation of Crimea, but also impedes navigation by limiting the size of ships that can transit the Kerch Strait, the only path to reach Ukraine’s territorial waters in the Sea of Azov.”

“Crimea, the bridge, the beginning. Everything illegal must be destroyed, everything stolen must be returned to Ukraine, everything occupied by Russia must be expelled,” Mykhailo Podoliak, who is an adviser to Ukraine’s leader.

Meanwhile, a cargo train in Ilovaisk in the Russian-occupied Donetsk region was hit by a “powerful explosion” Saturday morning, according to the adviser to Mariupol Mayor Petro Andrushenko.

“Not only Crimea. Not only fuel tanks. There is also a cargo train in Ilovaisk. Locals report a rather powerful explosion and subsequent detonation at night. The occupiers now have big problems with supplies from both sides,” Andrushenko said.

On Thursday, US President Joe Biden expressed caution about the dangers stemming from Putin’s nuclear threats as his military continued to experience military setbacks in Ukraine.

“First time since the Cuban missile crisis, we have a direct threat of the use (of a) nuclear weapon if in fact things continue down the path they are going,” Biden warned Thursday evening during remarks at a Democratic fundraiser in New York.

He added: “I don’t think there’s any such thing as the ability to easily (use) a tactical nuclear weapon and not end up with Armageddon.”