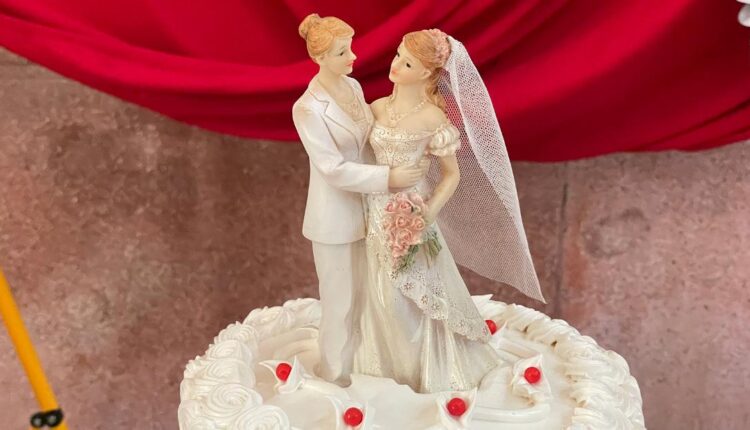 The two women married in September, surrounded by a small group of fellow LGBTQ activists in the sea-side city of Matanzas. But their union is not recognized by the Cuban government, at least not yet.

“It’s a legal right and we should all be the same before the law. It’s a question of a human right,” Yennys Hernandez told CNN moments after her wedding at the Metropolitan Community Church, a LGBTQ-friendly church that is one of the few on the island to carry out same-sex marriages.

Following the church service, the couple reminded assembled friends and family members to vote for the new family code.

“I believe we are all equal in terms of rights, options, possibilities and in terms of being a citizen and expressing that citizenship. I don’t think we are less than the rest of society,” said Annery Rivera, who said that if the new family code passes, she and Hernandez would hold a civil wedding that would mean in the eyes of the Cuban state they are legally married.

According to the Cuban government, the 100-page family code provides greater protections to women, children and the elderly as well as allowing LGBTQ couples to marry and adopt children.

Members in the LGBTQ community in Cuba have waited decades for this moment.

But some also fear a backlash if the code passes.

Following the 1959 revolution, gay people were among those sent to work camps known as Military Units to Help Production along with political dissidents, priests and others considered undesirables by Fidel Castro’s new government. Some gay men and lesbians even said they carried out sham marriages to avoid falling under suspicion.

Castro later apologized for the way homosexuals were treated but a full accounting of how many people were sent to the forced labor camps and who ordered their creation has never been revealed by the government.

In 1979, homosexuality was legalized in Cuba although many gay men and women said they still faced open discrimination.

In 1993, the Cuban film “Strawberry and Chocolate” about the unlikely friendship between a young supporter of the revolution and an older gay man was released and sparked a national debate about the treatment of LGBTQ people on the island.

For more than a decade, Mariela Castro, the daughter of former Cuban president Raul Castro, has openly advocated through a government-funded center for improved rights for gays, lesbians and transgender people.

But the push for greater equality has faced stiff opposition from both outside and from within the Cuban government.

In 2018, Cuban legislators abandoned provisions that would have legalized same sex marriage amid fears that a homophobic backlash would have lowered turnout for a referendum to approve a new constitution.

The following year, Cuban police broke up a peaceful LGBTQ rights parade saying the marchers did not have permission to hold the rally.

Evangelical pastor Yoel Serrano told CNN that while evangelicals have been more outspoken about their opposition to same-sex marriage, many groups across Cuban society have their reservations.

“I think about 95% of Christians disapprove but it’s not just Christians,” Serrano said. “There are communists who are not in agreement, materialistic people not in agreement. A lot of people who believe in different things that don’t agree with the changes they want to make with the new family code.”

Even at neighborhood “consultations” organized by the government across the island, some people who identified themselves as loyal revolutionaries said they were unsure how they would vote.

“It would be unfortunate if the code wasn’t approved massively because of one article,” a woman named Melba said — referring to the same-sex provision — at a neighborhood meeting in 2021 that CNN was permitted to cover.

In the weeks before the referendum, the Cuban government has made a full court press in favor of the new family code across state-run media, arguing the new code is proof the island’s now more than six-decades-old-revolution is capable of adapting to the times.

It remains to be seen if Cubans will vote overwhelmingly to allow same-sex marriage or if they will use the referendum as a rare opportunity to express their anger at the government over wide-spread power cuts, runaway inflation and increasingly bare supermarket shelves.

At the church in Matanzas, Rev. Elaine Saralegui Caraballo, the pastor who married Yennys and Annery, said that if the referendum passes or is rejected, the struggle for full equality still needs to continue.