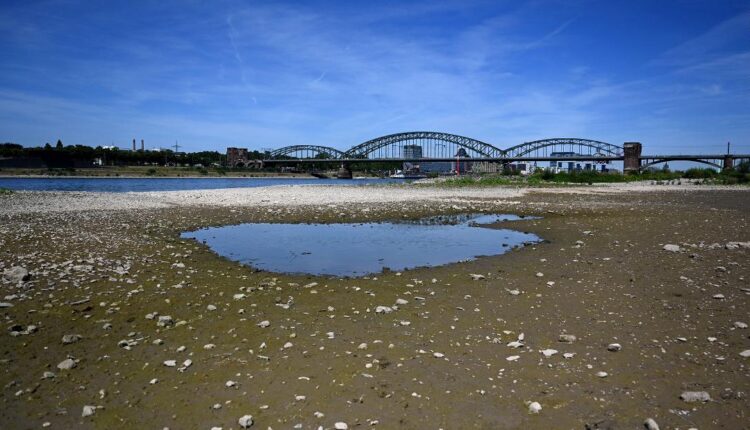 The findings were based on data from a 10-day period near the end of July. The monitor said 45% of land was now covered by “warnings,” which means there is a deficit of moisture in the soil, while 15% is under the more severe level of “alert,” where vegetation is stressed.

The data coincided with a report published Monday by the EU’s climate monitoring agency Copernicus, which said that much of Europe experienced a drier-than-average July, with several local records broken in the west for low rainfall and drought hitting several parts of southwestern and southeastern Europe.

The new data comes as the world grapples with a food crisis only just abating as Russia lifts its blockade of grain exports from Ukraine. Extreme weather and supply chain issues have worsened the crisis and are likely to persist for some time.

A recent report by the Joint Research Centre, the European Commission’s science service, forecast a drop of 8-9% in the production of grain maize, sunflowers and soybeans in the EU because of hot and dry conditions over the summer, well below the five-year average.

Copernicus Senior Scientist Freja Vamborg said that “dry conditions from previous months combined with high temperatures and low precipitation rates seen in many areas during July may have adverse effects on agricultural production and other industries such as river transport and energy production.”

In July, water reservoirs in several parts of Europe were at a very low levels, insufficient to sustain demand, according to Copernicus.

Southern England experienced its driest July since records began in 1836, while the month across the United Kingdom was the driest July in more than 20 years. The UK saw just 46.3mm, or 56%, of its average rainfall for the month following a long run of drier-than-average months, with the exception of February.

In France, July saw a total rainfall of 9.7mm, which made it the driest July there since records began in 1959 and represented a rainfall deficit of 85% compared to the 1991-2020 average.

Meanwhile, in Italy, a lack of rain since December 2021 has hit northern parts of the country and the Po River completely dried up in places earlier this summer. In mid-July at Cremona — around halfway along the Po — the water was more than 8 meters below “hydrographic zero,” impacting hydroenergy production, agriculture and transport.

Copernicus said the situation improved as a result of rainfall towards the end of the month, which brought a 40cm increase for the river, although hydropower production in the region was still affected.

July was also globally one of three warmest recorded, close to 0.4 degrees Celsius above the 1991-2020 average, and the sixth-hottest July in Europe, Copernicus said.

Meanwhile, Spain reported its hottest July in over 60 years on Monday.

CNN’s Benjamin Brown and Molly Stazicker also contributed to this report from London.

Why Hamas stayed out of the latest Gaza conflict