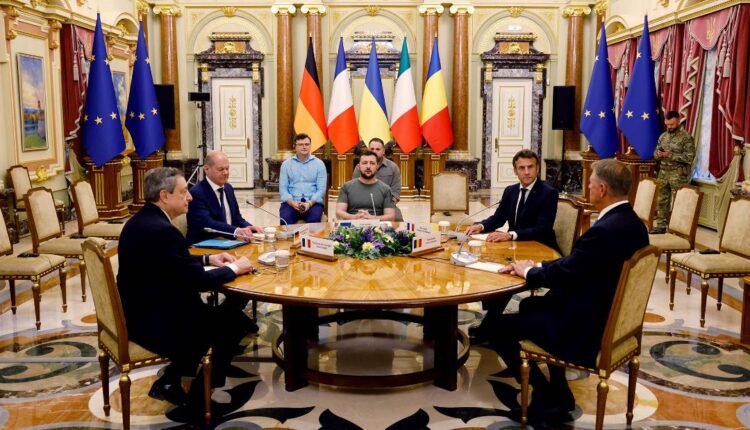 Speaking in Brussels, the European Commission’s President Ursula von der Leyen said the Commission recommends “that Ukraine is given candidate status. This is of course on the understanding that the country will carry out a number of further reforms.”

“In the view of the Commission, Ukraine has clearly demonstrated the country’s aspiration and the country’s determination to live up to European values and standards.”

Von der Leyen ended her statement by saying: “We all know that Ukrainians are ready to die for the European perspective. We want them to live with us the European dream.”

The Commission also recommended candidate status for Ukraine’s neighbor Moldova, but not for Georgia, until it meets further conditions. Leaders of the 27 EU member states will now meet for a summit next week to discuss its opinion.

Even if the member states agree that Ukraine should be a candidate nation — which is far from certain — the process to join the EU is complicated and takes, on average, just under five years to complete, according to the think tank, UK in a Changing Europe.

He added that the best way to demonstrate “our common and strong position” is by supporting Ukrainian integration into the EU, adding that its status as a candidate for EU membership “can amplify freedom in Europe historically and become one of the key European decisions of the first third of the 21st century.”

Macron later said that the possible granting of EU candidate status to Ukraine was a result of Russia’s invasion. He was speaking in an interview with CNN affiliate BFMTV Friday on board a train leaving Ukraine.

“Ukraine normally should not be a candidate,” he said following his visit to Kyiv, “We’re doing it because of the war and because we think it’s good.

“It’s a sign of hope, it’s a message for Ukraine to say that they are in the European family,” he said.

While Macron said most of Western Europe was supportive of the plan, “We have countries that are more reticent,” he said.

The French leader added that the question of Ukraine’s candidacy for the EU will be decided at the European Council summit next Thursday and Friday.

“The path is long to join the EU,” he added.

Ukrainian Prime Minister Denys Shmyhal expressed his gratitude for the EC’s decision. “Grateful to @vonderleyen for this decision!” he said via Twitter. “It will accelerate the process of full [Ukrainian] integration into the [European] internal market and effectively accompany the recovery of #Ukraine by EU standards.”

Russian President Vladimir Putin said Friday that Russia has “nothing against” Ukraine joining the EU.

“The EU is not a military-political bloc, unlike NATO, therefore we have always said and I have always said that our position here is consistent, understandable, we have nothing against it,” Putin said during a panel discussion following his speech at the St. Petersburg International Economic Forum.

“It is the sovereign decision of any country to join or not to join economic associations, and it is up to this economic association to accept new states as its members or not. As far as it is expedient for the EU, let the EU countries themselves decide. Whether it will be for the benefit or to the detriment of Ukraine is also their business,” Putin said.

Ukraine will now work to meet the Copenhagen Criteria, an opaque trio of requirements that the EU must be satisfied a candidate state has met in order to enter the proper accession negotiations. They focus on whether or not that country has a functioning free-market economy, whether the country’s institutions are fit to uphold European values such as human rights and the EU’s interpretation of the rule of law and whether the country has a functioning, inclusive democracy.

There are also real concerns that Ukraine is a long way from meeting the Copenhagen Criteria any time soon. According to Transparency International’s 2021 Corruption Perceptions Index, Ukraine is 122nd on its list of 180 countries. For comparison, Russia sits in 136th place.

Once the country is deemed to have met this criteria, it can begin the EU’s 35 chapters of negotiation, the final three of which return to some areas of the Copenhagen Criteria.

Then, when the leaders of the EU member states have agreed, it must then be ratified in the EU Parliament and by the legislative branches of each member state’s government.

Ukraine formally applied to join the EU on February 28, just four days after Russia began its invasion. Zelensky said at the time that the bloc must “urgently admit Ukraine using a new procedure … our goal is to be with all Europeans and, to be equal to them. I am sure we deserve it. I am sure it is possible.”

Before the war started, Zelensky had said that Ukraine would also like to join NATO. However, in the months since, he has cooled on the idea after it appeared the alliance was not willing to admit Kyiv any time soon.

“I requested them personally to say directly that we are going to accept you into NATO in a year or two or five, just say it directly and clearly, or just say no,” Zelensky said. “And the response was very clear, you’re not going to be a NATO member, but publicly, the doors will remain open,” he said.

Golfer hits spectacular shot from hospitality deck at the US Open

Shanghai surprise: How I survived the world’s strictest Covid lockdown