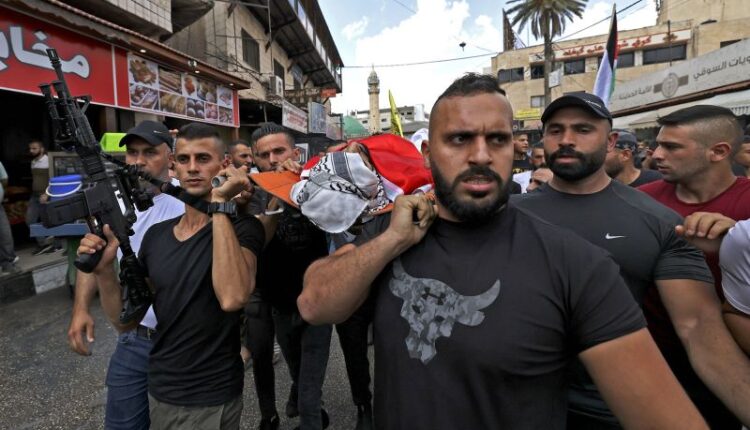 In the early hours of September 6, Mohammed Sabaaneh, 29, was live on TikTok, filming clashes between Israeli forces and Palestinians in the West Bank town of Jenin.

Young men seen in the video seem indifferent to the gunshots ringing out around them.

“I just hope one of them gets shot so we never see any of the slime balls again in the neighborhood,” Sabaaneh says, referring to the Israeli forces.

But soon after an ambulance drives by, the stream is cut short. This was the moment Sabaaneh was shot, says Ahmad Abu Tabikh, a cousin who was with him.

Speaking in their family home, Sabaaneh’s mother, Saeda Abu Tabikh, grew emotional as she explained that her son was just documenting the clashes.

“I say it to all mothers around me, it is not safe here at all. If your son is out when clashes are going on you should consider your son dead,” she said.

The Israel Defense Forces (IDF) said in a statement it came under attack by “rioters” the night Sabaaneh died and is examining the circumstances around his death. Although his cousin displays a photo of Sabaaneh with a gun, a common pose for young men from Jenin, nothing in his video suggests he was armed when he was killed.

The West Bank, which has been under Israeli military occupation since 1967, is simmering. Between the near-nightly Israeli raids, the clashes, the ensuing deaths, arrests and a political vacuum under an increasingly unpopular Palestinian Authority, there are fears it could soon boil over into a third Intifada, or uprising.

For months, Israel has been regularly raiding cities in the West Bank, saying it is targeting militants and their weapon caches before they have the chance to cross into Israel and carry out attacks. The operation, dubbed ‘Breaking the Wave’ by the IDF, was launched after a series of attacks earlier in the year killed 17 within Israel, three of whom were police or soldiers. One Israeli security guard and two Israeli soldiers have been killed in attacks in or near the West Bank since the beginning of the year, bringing the total to 20.

Israeli officials say they have stepped up the military operations because the Palestinian Security Services aren’t doing enough, and say they’ve prevented more than 300 attacks as a result.

The Palestinian Authority and its leader Mahmoud Abbas have also grown increasingly unpopular in recent years according to regular polling – partly for continuing the security cooperation with Israel, but also for what’s been dubbed as authoritarian behavior, like cancelling elections, forcing voters to wait for more than a decade; and arresting political dissidents, including a prominent activist who died in PA custody last year.

Those feelings seemed to come to the forefront earlier this week in Nablus, when residents violently clashed with Palestinian security services, throwing rocks and firing guns at the forces who had entered the city to arrest two suspects in scenes that shocked many Palestinians. One man, Firas Yaish, 53, was killed in the chaos. The PA is yet to announce the reason for the arrests.

“It’s very upsetting and dangerous,” said Dr. Mustafa Barghouti, president of the Palestinian National Initiative, an opposition party. “The last thing we want is to have internal fights between us while we are oppressed and discriminated against by the Israeli occupation… This could lead to very serious chaos.”

Palestinian and Israeli analysts say the battle for succession after the 87-year-old Abbas dies is already underway – on the streets in places like Jenin and Nablus.

“The most important factor is to call for elections, give people the right to choose their leaders, give the younger generation the opportunity to be represented in the system and to have their opinion heard,” Barghouti said. “At this time, [the youth] come to only one conclusion, they will hear you only if you use guns. And that is, of course, a dangerous situation for which not only the Palestinian Authority is responsible, but mainly it is Israel that is responsible for creating this situation.”

In Jenin, a feeling of hopelessness lingers along the narrow streets of its refugee camp, lined with posters celebrating Palestinians killed or those in prison. Shops sell necklaces with pictures of them – almost always shown with a gun.

It’s also where Al Jazeera reporter Shireen Abu Akleh was killed while covering one of the regular Israeli military raids – her death becoming a global story and diplomatic incident for Israel. A CNN investigation in May found evidence that suggested Abu Akleh was killed by Israeli forces, and earlier this month, the IDF admitted a “high possibility” that she had been shot and killed by Israeli fire – but no charges were announced.

Her producer, Ali Samoudi, who was with her the day she was killed, and who was also shot, says the blame ultimately lies with Israel, which he says wants a weak Palestinian Authority.

“The only one that bears responsibility for the situation is the [Israeli] occupation, and not the Palestinian Authority,” he said. “The occupation is killing every feeling of hope with its crimes against our Palestinian people.”

Children who come by to see Abu Akleh’s memorial at the spot where she was killed speak of becoming martyrs.

“Why would I live?” one 11-year-old asks. “It’s better to fight back… no one can protect us. We have to protect ourselves.”

Seventeen people have died in Iran during protests over the death of 22-year-old Mahsa Amini, who died in police custody last week, according to semi-official Tasnim News Agency. CNN cannot independently verify the death toll.

Thousands have been protesting across the country, with videos on social media showing demonstrators chanting, “women, life, freedom,” and some showing women removing their headscarves.

Ten prisoners of war were released as part of an exchange between Russia and Ukraine on Wednesday and were initially taken to Saudi Arabia, according to a statement from the Saudi foreign ministry. The prisoners are Moroccan, US, UK, Swedish and Croatian nationals, the statement read.

Lebanon’s banks are to remain closed indefinitely due to ongoing “risks” to employees and customers, the Association of Lebanese banks announced Wednesday.

At least 62 people died after a boat carrying dozens of migrants sank near the coastal city of Tartus in western Syria on Thursday, Lebanon’s Transport Ministry spokesperson told CNN on Friday.

And so we walked away. The interview didn’t happen. As protests continue in Iran and people are being killed, it would have been an important moment to speak with President Raisi. 7/7 pic.twitter.com/kMFyQY99Zh

Iran’s president withdrew from an interview with CNN’s chief international anchor Christiane Amanpour at the United Nations General Assembly in New York on Wednesday after she declined a last-minute demand to wear a head scarf.

Here’s how the event unfolded. By Christiane Amanpour:

At this crucial moment, I was due to speak with Iran’s President Ebrahim Raisi. He is in New York for the first time ever to attend this year’s United Nations General Assembly. It would have been his first interview on American soil.

Since 1995, I have interviewed every Iranian president, often on the sidelines of the UNGA. These interviews take weeks – sometimes months – of planning and negotiation. President Raisi was no different.

On Wednesday, after weeks of planning and eight hours of setting up translation equipment, lights and cameras, we were ready. But the president was nowhere to be seen. Then, 40 minutes after the interview had been due to start, an aide came over. The president, he said, was suggesting I wear a headscarf. Their initial justification was because it’s the holy months of Muharram and Safar.

I politely declined. We were sitting in a hotel in New York, where there is no law or tradition regarding headscarves.

I pointed out that no previous Iranian president has required this when I have interviewed them outside Iran – even the hardliner Mahmoud Ahmadinejad never made it a condition when I sat down with him on the sidelines of UNGA in 2010.

The aide made it clear that the interview would not happen if I did not wear a headscarf. He said it was “a matter of respect,” and referred to “the situation in Iran” – alluding to the protests sweeping the country.

Again, I told his aide that I couldn’t agree to this unprecedented and unexpected condition. When reporting in Iran, female reporters wear headscarves to comply with the law, otherwise operating as a journalist in the country would be near impossible. But the laws of Iran do not apply in New York.

And so, the interview was cancelled. As protests continue in Iran and people are being killed, it would have been an important moment to speak with President Raisi.

But it seems clear that President Raisi did not want to be seen with a woman without a headscarf in this moment.