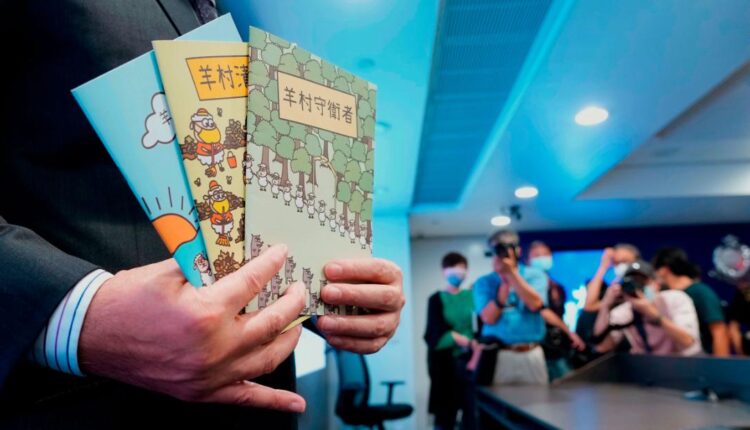 The charges center around a set of picture books telling the stories of a village of sheep resisting a pack of wolves invading their home — a storyline that the government prosecutors alleged was meant to provoke contempt of the local government and China’s central government in Beijing.

In one book, the wolves tried to takeover a village and eat the sheep, in another, 12 sheep are forced to leave their village after being targeted by the wolves, which the court believed alluded to the case where 12 Hong Kong activists attempted to flee the city to Taiwan as fugitives, but were intercepted by Chinese law enforcement.

In a ruling Wednesday, a Hong Kong District Court judge sided with the prosecution, expressing his view that the images had a correlation to events in city, and finding that the authors had the intention to “bring into hatred or contempt or to excite disaffection” against the local and central government, or both.

“By identifying (the People’s Republic of China) government as the wolves … the children will be led into belief that (the PRC government) is coming to Hong Kong with the wicked intention of taking away their home and ruining their happy life with no right to do so at all,” the judge Kwok Wai Kin wrote in a 67-page document outlining his thinking on the verdict.

“The publishers of the books clearly refuse to recognize that (China) has resumed exercising sovereignty over (Hong Kong),” Kwok wrote in his decision, referring to the transfer of Hong Kong, a former British colony, to Chinese rule in 1997.

The case has become a proxy for looming questions about the limits of freedom of expression in the city, coming amid a larger crackdown on civil liberties as part of Beijing’s response to wide-scale, months-long anti-government protests in 2019.

Those protests, which were sparked in response to a proposed bill which could send Hong Kongers to be tried for crimes across the border, transformed in to a larger pro-democracy movement that was also linked to popular concern about Beijing’s growing influence in the semi-autonomous city.

The defense for the accused, who were all executive council members of the now defunct General Union of the Hong Kong Speech Therapists, had argued that the charges leveled against them were unconstitutional, given that they were inconsistent with their freedoms of expression protected under Hong Kong law.

But Kwok, who is also one of a small cohort of judges hand-picked by the city’s leader to hear cases related to national security, struck down that challenge, saying instead that limited restrictions on freedom of expression were necessary for the protection of national security and public order.

In a document outlining reasons for the guilty verdict, Kwok disputed that the books were merely fables promoting universal values, another argument raised by the defense, pointing to a foreword in one of the books that references an “anti-legislation movement” in 2019 and the “One Country, Two Systems” mechanism governing Hong Kong’s relationship with the mainland.

A sentencing is to follow on Saturday, according to public broadcaster RTHK, which could see the defendants — who have been denied bail since their arrests in July, 2021 — handed up to two years in prison. Lorie Lai, Melody Yeung, Sidney Ng, Samuel Chan and Marco Fong, ages 25 to 28, had all plead not guilty.

The case was thrown into the public eye following their arrest, when police accused the group in a Tweet of “sugarcoating protesters’ unlawful acts” and “glorifying fugitives fleeing,” with officials raising specific concerns given that the target audience was children. Beijing and local leaders have sought to encourage national pride among Hong Kong youth, including by bolstering national education in local curricula.

The verdict has been met with outcry from rights defenders. Human Rights Watch in a statement accused the Hong Kong government of using the “very broad” sedition law “to penalize minor speech offenses.”

“Hong Kong people used to read about the absurd prosecution of people in mainland China for writing political allegories, but this is now happening in Hong Kong,” said Maya Wang, senior China researcher at Human Rights Watch in a statement. “Hong Kong authorities should reverse this dramatic decline in freedoms and quash the convictions of the five children’s book authors.”

In July, the United Nations’ Human Rights Committee also called on Hong Kong to repeal its colonial-era sedition law, saying it was concerned about its use to limit citizens’ “legitimate right to freedom of speech.”

In a reply, the government said use of the law was “not meant to silence expression of any opinion that is only genuine criticism against the government based on objective facts.”

The law, part of a 1938 Crimes Ordinance unused for decades, has been revived alongside Beijing’s introduction of a National Security Law to Hong Kong in 2020, which targets secession, subversion, collusion with foreign forces and terrorist activities — with a maximum sentence of life in prison.

Last year a court ruled that parts of the original sedition law which referenced the monarch could be converted to mean references to the central government or the Hong Kong government. A conviction carries a maximum two-year sentence.

Other recent cases have included the sentencing of a 75-year-old activist to nine months in jail for planning to protest against the Beijing Winter Olympics earlier this year. Last month, two men were arrested under suspicion of violating the law in connection with a Facebook group they are said to have managed.

God Of War Ragnarök Cover And The Last Of Us Part 1 | GI Show (Feat. Kenneth Shepard)