Food shortages: Why Russia is being accused of using food as a weapon of war 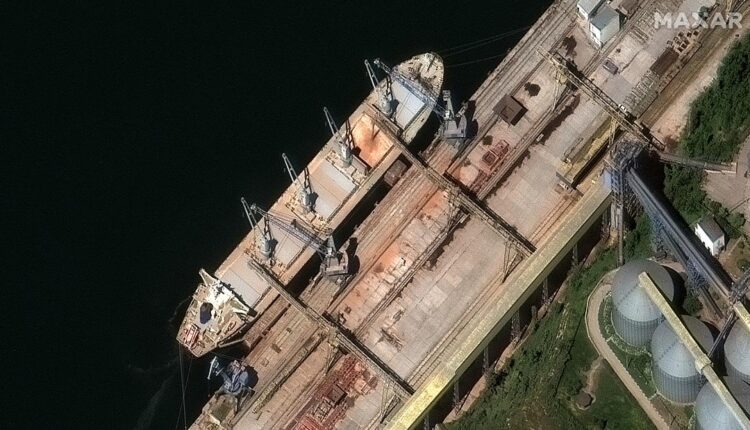 With its fertile soil and sprawling agricultural lands, Ukraine has long been described as one of the world’s breadbaskets. But Russia’s unprovoked assault is now putting a huge strain on Ukraine’s food production and exports. The ripple effects are being felt around the world.

Russia’s blockade of Ukrainian ports has already raised global food prices and threatens to cause a catastrophic food shortage in parts of the world, the UN said.

“For people around the world, the war, together with the other crises, is threatening to unleash an unprecedented wave of hunger and destitution, leaving social and economic chaos in its wake,” UN Secretary General Antonio Guterres said Wednesday.

Here’s what you need to know.

The Russian invasion has affected Ukraine’s entire food production and supply chain: From sowing to harvesting to exports.

The Food and Agriculture Organization of the United Nations (FAO) estimates that between 20% and 30% of Ukraine’s agricultural land will remain either unplanted or unharvested this year because of the war.

But the war is also causing worker shortages, because of the vast numbers of people who have fled their homes or become involved in the volunteer units of Ukraine’s armed forces.

International sanctions imposed against Russia over its invasion of Ukraine have also had an impact on global supplies of fuel, fertilizer and produce.

What about the grain already harvested?

Ukrainian authorities, and some international officials, have accused Russia of robbing the country of grain and other commodities in areas it occupies.

Denys Marchuk, deputy chairman of the Ukrainian Agrarian Council Public Union, said in a statement on Wednesday that Russia has “stolen about 600,000 tons of grain” from Ukrainian farmers.

The Kremlin has denied the allegations, calling them “fake news.”

Yet on Wednesday, the leader of the Moscow-backed military administration for the occupied portion of Ukraine’s southern Zaporizhzhia region boasted about train cars full of Ukrainian grain departing from the Russian-occupied city of Melitopol to Crimea.

Speaking on Solovyov live, an online video platform, Yevhen Balytskyi made it clear the plan is to ramp up these exports further. “It can be predicted that in the near future these deliveries will be increased hundreds of times,” he said.

Satellite photos of the Crimean port of Sevastopol provided by Maxar Technologies last month appeared to show Russian ships being loaded up with Ukrainian grain. Another set of satellite images revealed that one of the ships arrived in the Syrian port of Latakia last month, its second trip within four weeks.
In normal times, Ukraine would export around three-quarters of the grain it produces. According to data from the European Commission, about 90% of these exports were shipped by sea, from Ukraine’s Black Sea ports.

Russia is currently blocking maritime access to the Black Sea ports held by Ukraine, meaning that even the grain that is still under Ukrainian control cannot be exported to the many countries that rely on it.

Ukraine has tried to boost its rail exports of grain to make up for some of the lost capacity, but that’s proving challenging because of logistical issues. For example, Ukraine’s trains run on slightly wider tracks than those in most of Europe, which means that the grain has to be moved from one set of wagons to another at the border.

Why is Russia doing this?

Accusations that Russia is using food as a weapon of war have been mounting ever since the first reports emerged in March of grain being stolen by Russian troops.

“This is a cold, callous and calculated siege by Putin on some of the most vulnerable countries and people in the world … food has become now part of the Kremlin’s arsenal of terror, and we cannot tolerate it,” von der Leyen told EU lawmakers.

The idea of using food shortages to spark fear has particularly dark connotations in Ukraine because of its deep institutional memory of a deadly 1932-1933 famine.

Known as Holodomor, or the Terror Famine, it was artificially engineered by the Soviet leader Joseph Stalin, who removed food stocks from Ukrainian peasants, leading to the deaths of millions of people.

Under Ukrainian law, Holodomor is considered an act of genocide, aimed at forcing Ukrainians into submission and preventing efforts to build an independent Ukrainian state. Children learn about it in school and the country comes to a standstill to hold a minute of silence during the annual Holodomor Remembrance Day. There are memorials across the country and a large museum devoted to Holodomor and its victims in Kyiv.

What does this mean for the world?

The crisis in Ukraine is having a knock-on effect around the world because both Ukraine and Russia are major food exporters. Global food prices have risen by 17% since January, according to the FAO. The prices of cereals are up by more than 21%.

The importance of Russia and Ukraine to global food supplies cannot be underestimated. Almost a third of the world’s wheat exports and 60% of the world’s sunflower oil exports came from the two countries last year. Of each 100 calories’ worth of food that is traded around the world, 12 come from Russia and Ukraine, according to the International Food Policy Research Institute.

Ukrainian President Volodymyr Zelensky has warned that millions of people around the world may starve if Russia fails to allow Ukraine to export grain from its ports.

“We cannot export our wheat, corn, vegetable oil and other products that have played a stabilizing role in the global market. This means that, unfortunately, dozens of countries may face a physical shortage of food. Millions of people may starve if Russia’s blockade of the Black Sea continues,” he said in a recorded address to the Time 100 Gala on Thursday.

A new report by the FAO and the United Nations World Food Programme (WFP) released this week warned that the war in Ukraine could push as many as 47 million people into “acute food insecurity,” bringing the total number of people at risk of falling into famine to 323 million.

The UN’s program to fight food insecurity buys about half of its wheat from Ukraine each year.

Is anything being done?

International leaders are pulling diplomatic strings as they try to push Moscow to an agreement that would unblock the exports.

UN officials have devised a plan to get grain out of the Ukrainian port of Odesa through the Black Sea with Turkey acting as a guarantor of the deal.

Turkey said it was open to trying to broker a deal with Russia and Turkish Foreign Minister Mevlut Cavusoglu met with his Russian counterpart Sergey Lavrov in Ankara on Wednesday to discuss the issue.

While no deal came out of the talks, Cavusoglu said “there could be new ground for negotiations” between Ukraine and Russia.

He said “there are multiple ideas” about how to establish an open corridor for grain exports from Ukraine and that a UN plan was “reasonable and can be implemented ” but requires more talks.

Kremlin spokesman Dmitry Peskov said Thursday that no agreement had yet been reached on exports of Ukrainian grain to Turkey or the Middle East but that work was underway.

The Kremlin has previously rejected accusations that Russia is obstructing the export of grain from Ukraine and instead blamed the West and Kyiv.

Separately, the US is working to get temporary storage containers for Ukrainian grain into the country, a stopgap measure as it seeks to mitigate the crisis.