For Asia’s migrant workers, extreme heat is ‘a matter of life and death’ 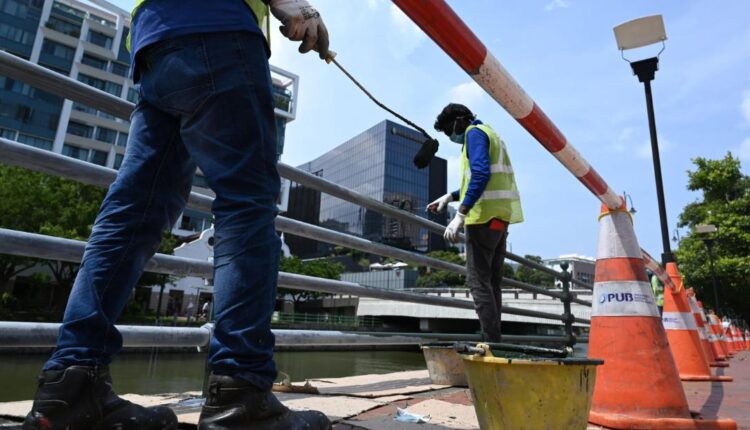 Temperatures had reached 34 degrees Celsius (94 degrees Fahrenheit), but Raj carried on despite the heat and soon developed a splitting headache. Within minutes, he collapsed to his knees and vomited.

“The heat scares me,” said Raj, who is being identified by only his first name because he fears repercussions from his company as well as the Singapore authorities for speaking about his working conditions.

“I have no choice. I have to work to support my family.”

For years, scientists warned that the climate crisis would amplify extreme weather, making it deadlier and more frequent. Now, many parts of the world are experiencing dangerous levels of heat — with little relief in sight.
Countries including the United States, the United Kingdom, Portugal, France and China recently issued extreme heat alerts and scientists predict even higher temperatures to come.

“It’s been troubling to see events unfold the way science has predicted,” said Radhika Khosla, an associate professor at Oxford University’s Smith School of Enterprise and Environment. “We are seeing fewer trees and more built up concrete areas that result in higher rates of heat stress, especially in vulnerable communities.

“We’ve clearly not listened and adapted.”

Few places to escape the heat

During recent heat waves, governments and global bodies like the United Nations advised people to remain indoors and switch on air conditioning to prevent heat-related illnesses.

But that advice is all but impossible for migrant laborers and other workers who lack access to cooling technology.

“Migrant workers are too often excluded and forgotten from most global conversations about the climate crisis even though they are clearly one of the most vulnerable groups at risk,” said British researcher and migrant worker rights specialist Andy Hall.

Hall highlighted concerns shared by many migrant workers on construction sites in countries like Singapore and Malaysia, who said that they were still being made to work outdoors despite extreme heat.

They said they were not permitted to enter most air-conditioned public spaces like shopping malls and other buildings because of rules by landlords and tenants prohibiting their entry and to avoid complaints being made by members of the public, Hall said.

Instead, they escape the heat by resting in parks or under trees, bridges and highways, he added.

“They are unable to benefit from these (cool air solutions) due to systemic restrictions as well as discrimination. It’s disappointing,” Hall said. “Their welfare in the ongoing heat crisis needs to be a bigger topic of discussion.”

Prolonged heat exposure is also a problem in other Asian countries like India, which saw crop yields significantly reduced in May due to heat stress faced by farmers and workers, and Thailand — where activists say sugarcane cutters reported severe heat exhaustion in April from working long periods in the fields.

Ahnaf, a laborer from Bangladesh, said he endures grueling 12-hour work days on an oil palm plantation in southern Malaysia, followed by hot, sleepless nights in an overcrowded and poorly ventilated dormitory room he shares with seven other men.

Like Raj, he is using only one name because he fears potential repercussions from his employer and the Malaysian government for complaining about his working conditions. “Working all day is tiring but it’s also hard to sleep and rest at night when it is so crowded and hot,” he said.

Jason Lee Kai Wei from the Yong Loo Lin School of Medicine, National University of Singapore (NUS) said that the lack of access to convenient cooling systems like air conditioning was “a matter of life and death” for many migrant workers. “If their working and living conditions do not improve, they could end up paying a high price with their lives,” he said.

Lee, also director at the NUS Heat Resilience and Performance Centre, said there were “solutions at hand,” on the part of companies that employ migrant laborers, like enforcing proper breaks during the hottest time of the day to protect workers’ health and safety. “But at the end of the day, employers must be convinced that the health and productivity (of migrant workers) can be achieved in tandem — not one or the other,” he said.

“The problem is many of these work sites do not offer these solutions to workers.”

Leading Singaporean migrant worker rights activist Jolovan Wham said that the government had not imposed “stop work orders” for migrant workers during the recent hot spell. “So companies can still insist that their workers continue even when temperatures are higher than normal,” Wham said.

Heat has always been an issue for migrant laborers, as well as domestic workers, in the city-state, he added. “They will not speak up about the terrible living and working conditions due to the heat because they are afraid,” he said.

“They carry on because at the end of the day, their jobs are too important and they can’t afford to lose work.”

Li, the owner of a construction company in Singapore, told CNN that many of his migrant workers were “severely affected” by the heat. He said they were given appropriate rest breaks but were still bound by other official protocols such as wearing heavy safety gear like helmets and thick rubber boots that trap huge amounts of heat.

“It all adds up,” said Li, who didn’t want his full name published for fear of government repercussions. “The heat isn’t dying down or going away and that affects overall productivity — but we still have building projects to complete,” he said.

“Working in Singapore’s hot and humid weather puts workers at an increased risk of heat injuries,” the ministry said in the report. “Employers have a duty to take, so far as is reasonably practicable, necessary measures to ensure that the work environment is safe and without risk to their employees’ safety and health.”

A spokesperson for the ministry told CNN that companies employing migrant workers are required to make provisions during periods of excessive heat and would be “subjected to enforcement actions under the Workplace Safety and Health Act if they failed to comply.”

Cooling gap between rich and poor

As the climate crisis causes global temperatures to increase, the gap between rich and poorer nations is set to widen, according to a 2021 study by the Climate Impact Lab global research initiative.

“Richer populations can protect themselves from the impacts of warming but the global poor don’t have this luxury,” said Solomon Hsiang, a co-author of the paper. He added that access to air conditioning and electric fans would still remain “out of reach for more than half of the global population” in the coming decades.

“Extreme heat exposure is a serious health hazard (and) certain people are exposed to far more heat than others such as those often doing low-paying work outdoors or in hot kitchens and warehouses,” said HRW senior environment researcher Katharina Rall.

Scientists say increasing access to cooling technology for vulnerable people should be “immediate priorities” for governments around the world. “Air conditioned public spaces are go-to places during extreme heat,” said Winston Chow, an associate professor at the College of Integrative Studies at Singapore Management University.

“Restricting access to cool spaces for vulnerable people like the elderly, disabled and migrant workers who spend a disproportionate amount of time outdoors working, would be the worst thing to do when heat waves are happening.”

Oxford professor Khosla pointed to the tremendous amounts of energy consumed by standard air conditioners and said that cooling technology needs to shift towards long-term sustainability.

“Air conditioning is necessary given the rising levels of heat but it has to be much more energy efficient,” she said. She added that replacing air conditioning units with more eco-friendly models would be financially costly but consuming less electricity and reducing carbon footprints would go a long way in helping the environment.

After suffering signs of heat stress, Raj said he was taken to a hospital in Singapore near the construction site where he worked.

He waited for about an hour in an air-conditioned room before being examined by a doctor and given a clean bill of health. “It was very nice and cold and I felt better,” he said. “The last time I had air conditioning was when I was on the plane to Singapore.”

“I work outdoors every day and there is no air conditioning in the dormitory. We have ceiling fans but they are (adjusted) to low speed so my friends and I rotate our sleeping arrangements so we can sleep under the fans,” he said.

“It’s not much, but at least it’s something.”