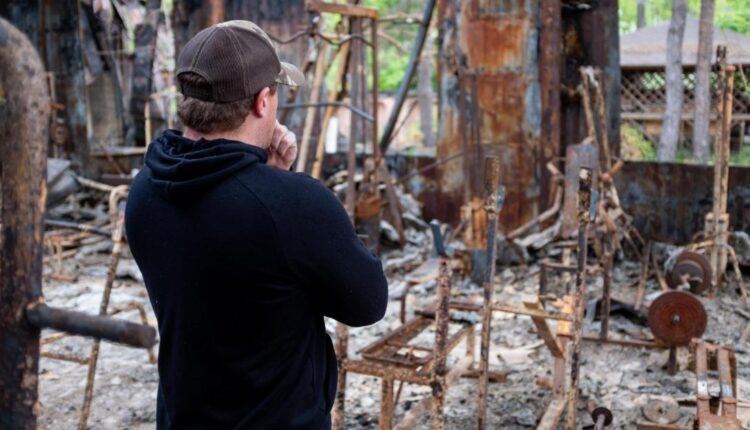 “We’re not going to go any further, because this wire is intentionally tied off to something and then buried right here,” he warns. “A lot of the Russians came back through some of these places and re-mined them, put [in] booby traps.”

Kevin is part of a group of elite foreign special forces veterans, primarily American and British, who have enlisted to help the Ukrainian cause.

He says that back in March, the group spent four days in the health spa — they called it “the house from hell” — often just 50 meters from Russian troops. It was, he says, the furthest-forward Ukrainian-held position in Irpin, a suburb on the outskirts of Kyiv, as Russian forces tried to push on through to seize the capital.

The once-affluent suburb is now synonymous with alleged Russian war crimes — a pilgrimage site for visiting dignitaries who’ve beaten a path to its shell-scarred streets. Kevin says he and his men were among the first to witness attacks on Ukrainian civilians here.

Despite a former career as a top-level US counter-terrorism operative, serving in Iraq and Afghanistan, Kevin says it is here in Ukraine that he has faced the most intense fighting of his life.

He says he and his new comrades-in-arms have implemented many of the guerrilla tactics that were used against the American military in places like Iraq and Afghanistan. They are the insurgents now.

“Everything is much more decentralized,” he explains. “Small group tactics is definitely a huge advantage here.”

We are not using Kevin’s full name because of the nature of his work in Ukraine.

“Being on this side now, and hearing their conversations on their radio — and them knowing, okay, they’re out there somewhere, we don’t know where or who it is — there’s definitely an advantage to that,” he says.

Like many military veterans, Kevin says he had felt adrift since originally leaving the battlefield several years ago. He had a full-time job in the US, but quit when Ukrainian President Volodymyr Zelensky put out a call for experienced foreign fighters at the beginning of the war. He arrived in western Ukraine, was driven to Kyiv, and was on the frontlines of the battle for the capital within a matter of hours.
He joined Ukraine’s International Legion, launched by the government in the first days of the war. The government pays him and his colleagues a modest salary of between $2,000 and $3,000 a month, though Kevin says they have spent far more than that buying equipment. The International Legion even got its own website, instructing would-be foreign recruits on everything from how to contact the Ukrainian embassy to what to pack.
In those first weeks, the government struggled to weed out the pretenders and war tourists who were out of their depth. By March 6, they had received more than 20,000 applications, according to the foreign minister.

The number of foreign fighters now in Ukraine is a state secret, but a spokesperson for the International Legion told CNN that the “symbiosis” means Ukraine’s “chances of winning are greatly increased.”

For the first time in his life, Kevin was defending against invasion by a better-equipped enemy. He, not the enemy, was the one who had to worry about airstrikes. There was no master plan, no air support — and there would be no evacuation in case of disaster.

“It was like a movie,” he says. “It was insanity from the start. We started taking indirect fire driving in — small arms fire driving in. And I was in a pickup truck, just driving down the street.”

Kevin says that, faced with the reality of battle, many foreign fighters decided to leave. “That’s when they say, ‘Maybe this isn’t for me.’ The first time that round comes in within 20 meters is the first time you’re like, ‘Oh, sh*t,'” he said.

Day after day, Kevin and his buddies concluded that they, too, had had enough. Then the next day came, bringing with it new orders and new missions, and they found themselves staying on. Eventually, he says, they wound up at the sauna and gym complex where they holed up for four days, even as the building slowly disintegrated under Russian shelling.

“We call it the house of horrors, because it was literally a nightmare in there,” he says. “This was four really miserable days of really little sleep, really heavy artillery, really heavy infantry presence from the Russians. No matter how many people that we removed from their side, they just kept coming.”

He and the other foreigners on his team were “shocked,” he says. “But the Ukrainian military was … calm, cool, collected. As they say, like, ‘This is normal, don’t worry about it.'”

He is in awe of the Ukrainian soldiers’ efforts.

“They are masters of terrain denial,” he says. “They know every inch of the area. They know the little alleyway that we can wait. They know how to get there. They know this is where we can hide. They know which building to go to. And they’ll tell you before we get there, hey, five houses over has a real nice basement. That’s where we should go.”

‘Everything was on fire’

Kevin walks through what remains of the building, which was ravaged by fire. In the gym, barbells have warped under the extreme heat. Rubber has melted off weight plates.

“This was a chair,” he says, pointing to a metal frame. “We were being artilleried so heavy that we put this chair here so that we could jump out this window if we had to in a hurry.”

When a sheet of loose corrugated roofing slams in the wind outside, he jumps.

At one point during the standoff, he says, Russian troops were so close that, lying on the floor in the pitch-black night, he could hear glass crunching under the enemy’s feet.

And yet, he is sure he made the right decision to come to Ukraine.

“It became more and more self-evident for us that this was the right thing,” he says. “Everything was on fire. The artillery was nonstop. We’d already seen civilians just outright murdered.”

He agrees that there was moral ambiguity to the wars in Iraq and Afghanistan.

“It really comes down to good versus evil,” he says. “You’ll hear the Ukrainians call the Russians ‘Orcs.’ It’s because to them, it’s a symbol of good versus evil, like in Lord of the Rings — the light versus the dark,” he said.

“The Russians, they know exactly what they’re doing. They have education. They have social media, news,” he says. “I never figured out why they were killing women and children. And it wasn’t by accident. It was murder. We found many people just at the end of the street who were bound together, shot, thrown on the side of the road, ran over by tanks. Just barbaric. For what reason?”

Russia has repeatedly denied allegations of war crimes and claims its forces do not target civilians. Ukraine’s prosecutor general, Iryna Venediktova, is investigating thousands of cases of alleged Russian war crimes across the country, and the top war crimes prosecutor for the International Criminal Court has traveled to Ukraine to investigate.

But he knows that Ukraine “is where I should be,” and plans to stay in the country for the foreseeable future.

“We’ve seen this play out time and time again in history. People ask me all the time, ‘Oh, this isn’t your fight.’ Or, ‘What are you doing over there?’ Yeah, but it wasn’t our fight many times in history. And then it was. It’s not your problem until it’s your problem.”

Olga Voitovych contributed to this story.