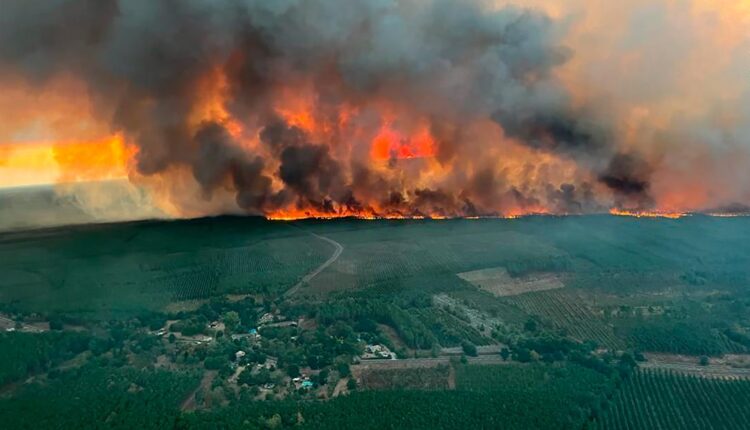 The French government is calling on companies to make employees who are enlisted volunteer firefighters available throughout August to battle the blazes, as drought conditions and a fourth heat wave since June hit much of the country.

“We are getting to a point of exhaustion for the firefighters,” French Interior Minister Gérald Darmanin told reporters on Wednesday during a visit to the fire-battered department of Aveyron in southern France.

The Gironde fire, which started Tuesday, has prompted the evacuation of 10,000 residents, said Martin Guesperau, deputy commissioner for defense and security at the Nouvelle-Aquitaine prefecture. He earlier said 6,000 hectares of forest had been destroyed.

The main A63 highway between Bordeaux and Bayonne “will be closed both ways,” the Gironde prefecture said Wednesday. “The fire is very virulent and has spread to the department of Landes.”

The flames have destroyed 16 houses but no injuries were reported, according to the press release.

“We are entering a difficult day with very high risks. The weather is extremely unfavorable at the moment,” authorities said.

French officials added that they are also fighting at least three other fires in the south of the country.

Temperatures in this part of the country are expected to reach as high as 40 degrees Celsius (104 degrees Fahrenheit) on Thursday and Friday, according to a forecast published by the country’s meteorological service, Météo France on Wednesday.

The area affected is almost the same size as India, and greater than the three biggest US states — Alaska, Texas and California — combined.

And new satellite imagery from the EU’s climate monitoring agency Copernicus reveals a near cloudless view of western Europe as it experiences yet another extreme heat wave.

“This new heatwave is associated with a robust high-pressure figure causing cloudlessness over much of western Europe,” according to Copernicus.

CNN meteorologist Chad Myers said: “Other than a few slightly cooler days in between, this heat wave is forecast to last for the next 10 days.”

The extreme temperatures Europe is experiencing are down to a persistent build of high pressure and strong sunshine, according to Liz Bentley, chief executive at the Royal Meteorological Society.

Western Europe particularly “has been struggling since the beginning of June,” she told CNN Wednesday.

“Then you combine that with the lack of rainfall — and for some parts of Europe there’s been below average rainfall now for 15 or 16 months — there’s been a very prolonged period of dry weather and so rivers and reservoirs have got down to very, very low levels.”

Bentley continued: “The recent heat waves have exacerbated the problem because it further evaporates any moisture from the ground, from the rivers, from the reservoirs. It’s left large swathes of Europe in drought conditions.”

These dry conditions and the continued sweltering temperatures have led to wildfires, which Bentley said are “not that uncommon” in Europe. But, she added, “the season started very early, and it has been much more persistent and more widespread than we would normally see.”

She added that the consequences of extreme heat events and drought are already being seen, for example in agriculture and farming communities.

“It just means that we’re going to see a severe drop in crop yields throughout the summer, and that then will have a knock on effect on food prices — not just across Europe but around the world as well. On the back of the problems that’s happening in Ukraine because of the Russian invasion — it’ll just exacerbate the whole problem around food prices.”

Bentley said the latest forecasting from the UK’s Centre for Ecology and Hydrology suggested the situation is unlikely to change anytime soon. Its analysis of projections indicate that over the next couple of months, temperatures are expected to stay above average, with problems exacerbated by below average rainfall