Golfer hits spectacular shot from hospitality deck at the US Open 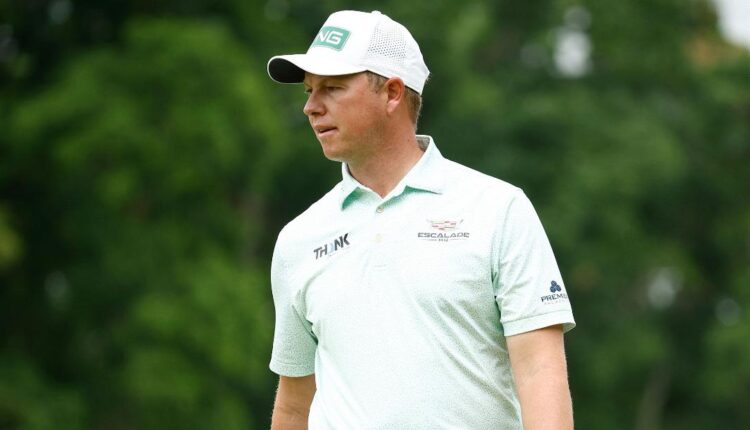 Facing The Country Club’s longest hole — the 616-yard fourteenth — MJ Daffue found himself making an unexpected detour after his tee shot skewed left and settled on the hospitality deck.

Still in bounds, the South African could have taken the opportunity of a drop ball, but instead lined up his 4-wood on the carpet, much to the delight of the crowd gathered to watch mere feet away.

With a tree, a concession stand, and a flock of spectators in the driving line, the margins for error were nerve-rackingly small, yet Daffue delivered emphatically, blasting his effort through the gap.

If the shot wasn’t already impressive enough, it landed just off the green in the rough. However, an awkward chip and missed putt meant that the 33-year-old was forced to settle for a bogey.

Quizzed on his decision not to take a drop, Daffue admitted it was part-tactical, part-entertainment.

“I had a good angle. I figured I was going to go left of the tree and it was a good lie,” Daffue told Sky Sports. “If I drop it I had a hard time getting to the next level on the fairway.

“We’re here for entertainment right? So I figured why not entertain them a little bit?”

“It was really a shot that just suited my eye — I do much better when I sometimes have a corridor or no target and I have to find something in the background. It was right up my alley.”

Ranked 296th in the world and making his first major championship start, Daffue has been one of the surprise standout names across the first two rounds in Brookline, as much for his golfing prowess as his showmanship.

An impressive three-under 67 on Thursday saw the South African arrive for his second round in joint-second place, and he temporarily topped the leaderboard by three strokes at six-under on Friday after a scintillating front nine.

Four birdies through the first seven holes helped put Daffue three-under at the turn, but a slump on the home stretch — culminating in a double bogey at the eighteenth — left him with a two-over 72 for the round.

At one-under overall, Daffue looks certain to make the 60-man cut to progress to the third round, but can already reflect on a landmark major debut and the ability to say a line “not a lot of people can say.”

“Saying you led the US Open, it’s an unbelievable feeling,” Daffue told reporters. “It’s obviously not the destination, it’s a step towards the goal.