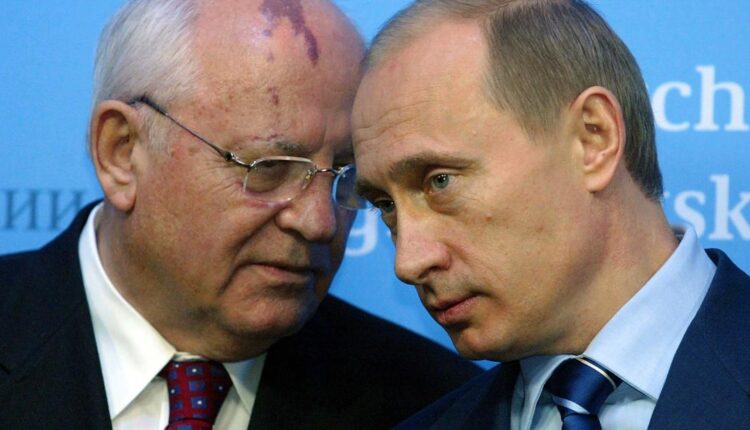 “He led our country during a period of complex, dramatic changes, large-scale foreign policy, and economic and social challenges,” the statement read. “He deeply understood that reforms were necessary, he strove to offer his own solutions to urgent problems.”

A sense of protocol may have kept the Kremlin leader from telling us what he really thinks about the man who presided over the collapse of the Soviet Union, something Putin once called the “greatest geopolitical catastrophe” of the twentieth century. For a more unvarnished opinion, we can rely on Margarita Simonyan, the bellicose editor-in-chief of state propaganda outlet RT (formerly Russia Today).

“Gorbachev is dead,” Simonyan wrote on Twitter. “Time to gather up what’s been scattered.”

Simonyan seems to be channeling her President, who has embarked on a campaign of imperial restoration with the invasion of Ukraine. And it’s tempting to look at the two leaders through a simple narrative arc: Gorbachev allowed the 15 republics of the Soviet Union to spin apart, and Putin is trying, through brute force, to piece that empire back together.

On February 26, two days after Russia’s invasion, Gorbachev’s foundation called for an “early cessation of hostilities and immediate start of peace negotiations.”

But it would be a stretch to say that Gorbachev has been a consistent and vocal critic of Putin. For starters, Gorbachev came out as a supporter of Russia’s 2014 move to annex the Black Sea peninsula of Crimea from Ukraine, a prelude to Putin’s full-scale invasion of the country.

And looking further back, Gorbachev himself resisted the breakup of the Soviet Union. In a wide-ranging 2012 interview with CNN’s Christiane Amanpour, the last Soviet President insisted that his efforts to hold the USSR together were undermined by a scheming Boris Yeltsin — who went on to become the President of an independent Russia after the 1991 collapse — and by the Soviet leadership.

Gorbachev’s main complaint was that Yeltsin supported a so-called union treaty that would have preserved the USSR as a more loose federation, but worked in parallel behind his back to establish his own power base and orchestrate Russia’s exit from the union.

In reality, national independence movements in Ukraine, the Baltics and other republics had already gathered substantial momentum by the late perestroika (restructuring) era. And after the failed August 1991 putsch by hardliners, Gorbachev’s union treaty was effectively dead in the water.

In fairness, Gorbachev was not the only one to misread the situation. Just weeks before the August 1991 coup attempt, US President George H.W. Bush paid a visit to Kyiv — then the capital of the Ukrainian Soviet Socialist Republic — and gave a speech admonishing Ukrainians to avoid what he called “suicidal nationalism.”

Bush’s speech — remembered today as the “Chicken Kyiv” speech — went over like a lead balloon. Bush and his advisers may have been worried about the nightmare scenario of an implosive breakup as was then beginning in Yugoslavia, leaving a massive nuclear arsenal in uncertain hands. But within a few months, Ukrainians voted overwhelmingly for independence.

Gorbachev, who began his rise through the ranks of the Communist Party in Russia’s southern Stavropol region, simply may have not comprehended the national aspirations of Ukrainians — or the desires of other nations imprisoned within the USSR for independence. His willingness to violently put down protests in Soviet republics — something more rarely mentioned in discussions of his career — is a blot on his legacy.

That does not necessarily put Gorbachev in the same league as Putin, who refuses to accept Ukraine as a legitimate nation, and laments what he calls the “artificial division of Russians and Ukrainians.”

It is often noted that Gorbachev — who signed key arms control agreements that lowered the temperature of the Cold War and steered the world away from the perils of nuclear war — enjoys international stature while often being reviled in Russia. Admirers of Gorbachev like to point out that he had a deeply humanistic streak.

“He loved a woman [his wife Raisa] more than his job,” he wrote in a tribute. “I think he just couldn’t hug her if his hands were covered in blood.”

Could Gorbachev have used what remained of his moral authority in Russia to call out Putin more strongly for his actions? And would an indifferent Russian public have listened? That we will never know. But his reticence meant that his criticisms of Russia’s slide toward dictatorship were often muted.