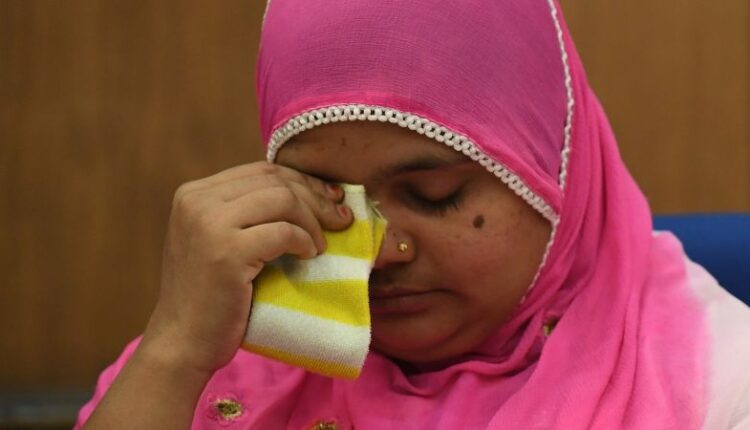 Standing in a row outside the gates of Godhra remand center in Gujarat, western India, the 11 middle-aged men could have been mistaken for visiting dignitaries receiving sweets and blessings from local admirers.

In reality, they were part of a 2002 Hindu mob who had just been released after serving 14 years of life sentences for one of the most heinous crimes in India’s recent history.

Since their release in August – on India’s Independence Day – the men have scattered across the country.

But there’s one person who can never escape the repercussions of the attack 20 years ago – Bilkis Bano, who was just 21 years old and pregnant when she was gang-raped by a mob that killed 14 of her family members, including her 3-year-old daughter.

Bano was too distraught to speak about the men’s release, but issued a statement through her lawyer, saying she hadn’t been consulted about the decision and it had “shaken” her faith in justice. “My sorrow and my wavering faith is not for myself alone but for every woman who is struggling for justice in the courts,” the statement said.

The recommendation to free the men was made by an advisory panel appointed by the Gujarat government, led by Narendra Modi’s Bharatiya Janata Party (BJP). Critics say the decision was tainted by politics, misogyny and religious discrimination, and exposes what they see as the hypocrisy of BJP leaders who claim to support gender equality and women’s rights. Some lawmakers and activists have petitioned the Supreme Court for the men to be rearrested.

“The concept of Article 15 where there will be no discrimination in the Constitution on the basis of sex or religion or gender has just been thrown out the window,” said one of the petitioners, Mahua Moitra, a lawmaker from the All India Trinamool Congress party.

Some lawmakers said the decision had political overtones, coming just four months before the BJP hopes to secure re-election in the Gujarat state elections.

Subhashini Ali, a former parliamentarian and vice president of the All India Democratic Women’s Association, who has filed a separate petition in the Supreme Court, said if the intent was to polarize voters, it had failed. “For the first time, I’m finding that even BJP supporters are not supporting what they’ve done,” she said.

The Gujarat and central governments did not respond to requests for comment.

Bano’s fight for justice dates back to 2002, when centuries-old divisions erupted in Gujarat between majority Hindus and Muslims, who according to the latest census figures, from more than a decade ago, made up about 10% of the state’s population, and about 14% nationwide.

At the time, Hindu mobs set fire to Muslim homes and shops in retaliation for the firebombing of a train near Godhra, which killed dozens of Hindu activists and was blamed on Muslims.

The activists had been campaigning to build a temple on the site of the Babri Masjid mosque in Ayodhya, a city many Hindus believe is the birthplace of Rama, the incarnation of Vishnu, one of Hinduism’s most powerful deities.

Muslims were still grieving the 1992 loss of the ancient mosque, destroyed by Hindu nationalists, reportedly with hammers, rods, and shovels. That triggered some of India’s deadliest sectarian violence since independence in 1947.

An inquiry found Modi – then Gujarat’s chief minister – wasn’t to blame for the riots in 2002 that killed more than 1,000 people – including Bano’s family. Bano would later tell the court the men ran toward them with swords, sticks and sickles. According to court documents, one grabbed her young daughter and smashed her on the ground. Three men raped her, while the others attacked her sisters, aunts and their daughters. She fell unconscious and woke hours later, surrounded by bodies.

In 2008, after a high-profile trial, her attackers were sentenced to life in prison for rape and murder – and that’s where Bano hoped they’d stay. But this August, the state government granted them remission, under a provision in India’s Code of Criminal Procedure that allows prisoners to be freed once they serve 14 years.

Moitra, from the All India Trinamool Congress party, was horrified by the idea that Bano, now in her 40s, would once again have to return to court, so she and other activists challenged the release with the Supreme Court on her behalf.

“Everyone thinks that Bilkis would be the one to file a review petition. (But) she was exhausted,” Moitra said. “She couldn’t believe that justice would end like this.

“So I think it was incumbent upon all of us to do it.”

The Supreme Court played a role in the prisoners’ release and will now decide whether it should be upheld or reversed, according to Sanjay Hegde, a senior advocate at the court.

He said the court had earlier directed authorities to consider the prisoners’ plea for leniency under a 1992 remission policy.

That policy entitled all prisoners to seek remission after serving 14 years, no matter what crime they’d committed. The rules were tightened in 2014, so that some criminals, including rapists and murderers, are ineligible for early release.

Gujarat Additional Chief Secretary Raj Kumar told the Press Trust of India (PTI) the men were released under the rules that were in effect at the time of their conviction.

National president of the BJP’s women’s wing Vanathi Srinivasan said the Gujarat government followed the law. “They were not released for political reasons,” she said, according to PTI.

However, in videotaped comments, CK Raulji, a BJP state legislator and member of the panel that recommended the release, suggested caste may have had something to do with it. “They are good people – Brahmins. And Brahmins are known to have good ‘sanskaar’ (morals). It might have been someone’s ill intention to corner and punish them,” he said, independent news site Mojo Story reported.

Though the caste system has long been outlawed in India, the traditional system of social hierarchy holds Hindu Brahmins above other castes – and especially above Muslims.

Hegde told CNN there was no legal reason why the Supreme Court couldn’t reverse the men’s release and order them to surrender to authorities.

“If they refuse to surrender, appropriate action could be taken,” he said.

Yakub Rasool, Bano’s husband, agreed to meet CNN beside a highway in Gujarat’s Godhra District, so as not to reveal the location of his wife, who is in hiding. “Bilkis is so upset that she is not talking to anyone,” he said.

Rasool said the couple had moved house up to 20 times in the past two decades, and now feared retribution from the men, who lived in the same village when the riots broke out.

“Since the incident took place, we had to leave the village, but even today about 150 Muslim families live there,” he said. “All of them are scared. They feel these men will create trouble since they are now free.”

Across India, protests were held in support of Bano, condemning the decision as an attack not only on Muslims but women’s rights in a country where government data shows a woman is raped every 17 minutes. Some saw the assailants’ release as a deliberate pitch for votes from BJP supporters ahead of the Gujarat state election.

“The message the Gujarat government is sending out to its voters is that we support the men who raped Muslim women in the 2002 riots – vote for us,” activist Kavita Krishnan told supporters at a rally in Delhi in August.

Critics say the decision reflects the disconnect between the government’s messaging on women’s rights and the daily reality for most women. The men were released on Independence Day, the same day Modi addressed the nation from a podium at the historic Red Fort in Delhi, urging his countrymen to show women respect.

“There should be a feeling of respect for them, and in this, the government, administration, police and justice system will have to perform their duty (100) percent. We have to make this resolution,” Modi said.

But Rasool says there was no respect shown to his wife, who fought for justice for many years.

The couple want the decision reversed, as do those who have filed petitions with the Supreme Court. “We strongly believe that what happened with Bilkis was wrong and the convicts should be sent back to jail,” he said.