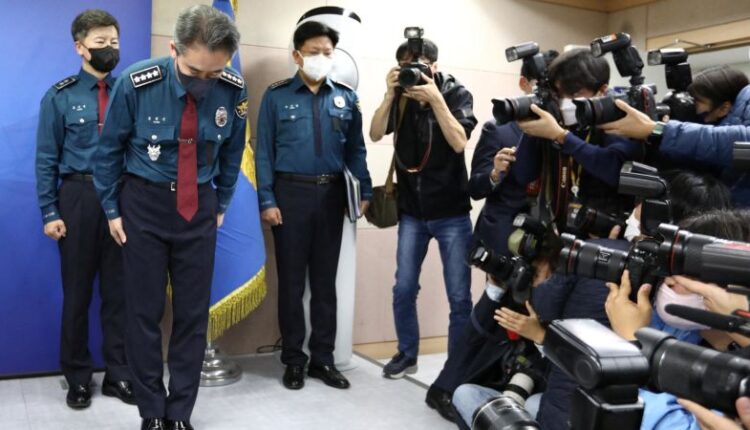 The Seoul Metropolitan Police Agency said the investigators raided eight of its offices and seized internal reports and documents relating to reports made by members of the public to the 112 emergency hotline.

Among the offices raided was the Yongsan district police station, which oversees the nightlife neighborhood of Itaewon, where the crush took place.

The raids came as Korean authorities face mounting public pressure and fury, with witnesses saying there was little to no crowd control in Itaewon on the night of the crush – despite police receiving warnings far in advance.

Saturday’s deadly crowd crush occurred in a section of narrow alleyways, where witnesses described being unable to move or breathe as massive crowds gathered in a street no more than 4 meters (13 feet) wide. It has since emerged that members of the public had phoned the police to warn of overcrowding hours before the first deaths were reported.

Wednesday’s raids were carried out by a special investigative unit created only a day earlier by the National Police Agency (NPA) to look into the disaster.

The NPA said on Wednesday it had suspended the chief of the Yongsan police station, one of the closest police stations to the crush site.

“Chief Lee Im-jae cannot carry out his normal duties given the situation,” said the NPA, adding that his successor would be announced later that day.

Records given to CNN by the NPA show police received at least 11 calls from people in Itaewon concerned about the possibility of a crowd crush as early as four hours before the incident occurred.

The first call came at 6:34 p.m., when a caller warned, “It looks really dangerous … I fear people might get crushed.”

Another caller less than two hours later asked for traffic control, saying there were so many people packed into Itaewon’s narrow alleys that they kept falling over and getting hurt.

Speaking to the media on Tuesday, NPA chief Yoon Hee-keun admitted for the first time that police had made mistakes in their response.

He added that the police response to the emergency calls had been “inadequate,” and that he felt a “heavy responsibility” as the agency head.

It was at the Tuesday news conference that he announced the creation of the special investigative unit that carried out the raids on Wednesday.

The unit would “reveal the truth transparently,” Yoon promised.

Other government bodies have also admitted being unprepared. The Interior Ministry said Monday it had no guidelines for dealing with the crowd surge because it was not caused by a single event with a single organizer.

“One of the reasons (for the disaster) was a lack of deep institutional knowledge and consideration for crowd management,” said Prime Minister Han Duck-soo on Tuesday.

He added that even if more police had been deployed, they might have been ineffective because “we don’t have a crowd management system.”