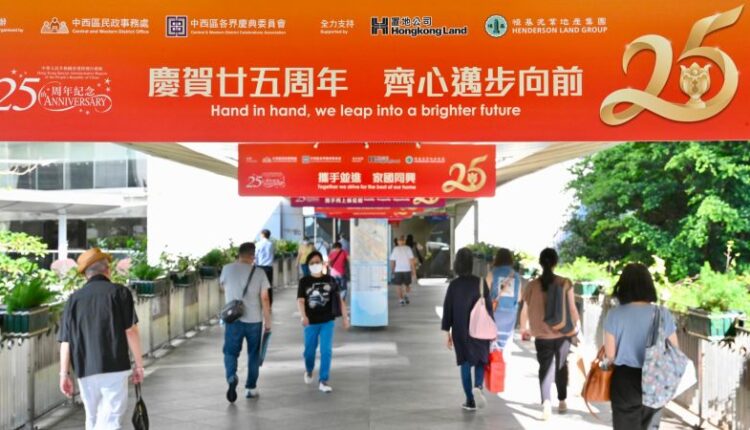 Two top Hong Kong officials have tested positive for Covid-19, potentially derailing any chance of an official visit from Chinese leader Xi Jinping next week to mark the 25th anniversary of the city’s handover to China.

Secretary for Constitutional and Mainland Affairs Erick Tsang and director of the Chief Executive’s Office Eric Chan both tested positive through nucleic acid tests and are undergoing isolation, a Hong Kong government statement said on Thursday.

Their infections raised concerns over a potential visit by state leaders for the city’s July 1 celebrations, which include the swearing in of Hong Kong’s new leader and the anniversary of its 1997 handover from British rule.

It also casts doubt on the robustness of the city’s “closed-loop” arrangement, which requires officials to avoid public engagements and enter quarantine ahead of the planned ceremonies.

As China sticks to a byzantine approach of snap lockdowns, mass testing and quarantining to maintain its zero-Covid policy, Chinese officials appear to be taking extra precautions not to catch the virus.

Xi has not left mainland China since the outbreak of the pandemic more than two years ago. And although whether he will attend the handover ceremony remains a tightly guarded secret, the Hong Kong government has started to prepare for the arrival of a delegation of state leaders from across the still largely sealed border with the mainland.

Top Hong Kong officials entered the closed loop system on Thursday, under which they can only travel between home and work by private vehicle and must spend a night in a quarantine hotel on the eve of the handover anniversary. They are also subject to daily testing for Covid-19.

The statement made no mention of the two officials’ symptoms.

Chan is set to become the city’s No. 2 official on July 1, as incoming Hong Kong leader John Lee takes the helm.

Despite high vaccination rates and a reduction in overall cases, the Hong Kong government remains committed to its own “zero Covid” style policy, maintaining stringent social distancing and contact tracing measures, as well as tight border restrictions – including a mandatory seven day hotel quarantine for all arrivals.