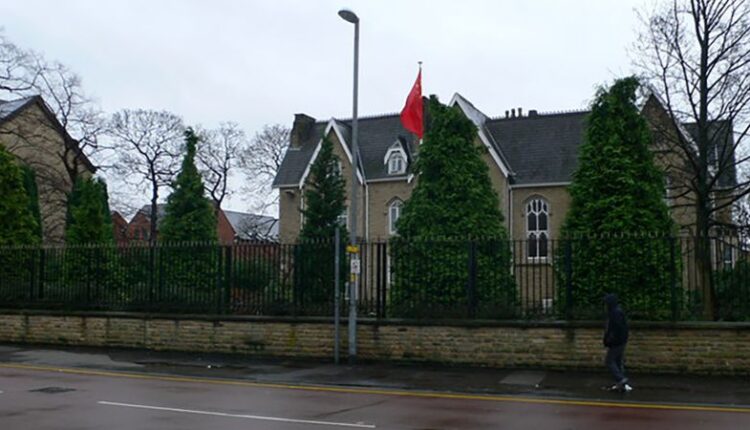 Activists and lawmakers in the United Kingdom are demanding an investigation after a Hong Kong pro-democracy protester was allegedly beaten on the grounds of the Chinese consulate in Manchester.

A pro-democracy group called Hong Kong Indigenous Defence Force had staged a protest outside the consulate in the northern city on Sunday, in opposition to the Chinese Communist Party Congress happening the same day in Beijing.

Video of the incident shared widely on social media shows a confrontation breaking out on the sidewalk outside the consulate, with loud shouts heard as people rush towards the gated entrance. The video then appears to show one Hong Kong protester being dragged through the gate into the consulate grounds and beaten by a group of men.

The video appears to show local police entering the grounds of the consulate to break up the violence.

Hong Kong Indigenous Defence Force alleges that Chinese consular staff were involved in the alleged beating, and that the protester was taken to hospital in stable condition.

A statement from Greater Manchester Police said “officers were present and responded immediately to diffuse the situation.” It added: “Enquiries are ongoing at this time to understand the full circumstances. A police patrol plan is in place in the area following this incident.”

On Monday, Chinese Foreign Ministry spokesperson Wang Wenbin said he was “not aware of the situation.”

CNN approached the Chinese Embassy in London for comment but did not receive an immediate response.

Greater Manchester Police did not immediately reply to CNN’s query as to whether the officers had the authority to enter the consulate grounds. Typically, authorities of a host country are not allowed to enter foreign consular grounds unless given permission.

Video of the scuffle has been shared online by multiple UK lawmakers, who have called for an investigation into the alleged involvement of Chinese consular staff.

“The UK Government must demand a full apology from the Chinese Ambassador to the UK and demand those responsible are sent home to China,” ruling Conservative Party lawmaker Iain Duncan Smith wrote on Twitter.

Conservative Party member of Parliament Alicia Kearns also tweeted on Sunday that authorities “need to urgently investigate,” and that the Chinese Ambassador should be summoned. “If any official has beaten protesters, they must be expelled or prosecuted,” she wrote.

Both lawmakers have previously been vocal critics of the Chinese Communist Party.

Prominent Hong Kong activists have also spoken out. Nathan Law, a former lawmaker and pro-democracy figure who fled to the UK in 2020, tweeted: “If the consulate staff responsible are not held accountable, Hong Kongers would live in fear of being kidnapped and persecuted.” He urged the British government to “investigate and protect our community and people in the UK.”

Britain is home to large numbers of Hong Kong citizens, many of whom left the territory following the introduction of a sweeping national security law in 2020 that critics say stripped the former British colony of its autonomy and precious civil freedoms, while cementing Beijing’s authoritarian rule.

According to an online statement by organizers of Sunday’s protest, around 60 demonstrators had gathered outside the Manchester consulate to protest “the re-election of Xi Jinping.”

The Chinese Communist Party Congress, a twice-a-decade leadership reshuffle and meeting of the party’s top officials, kicked off on Sunday. Chinese leader Xi, who came to power in 2012, is widely expected to break with convention and take on a third term, paving the way for lifelong rule.