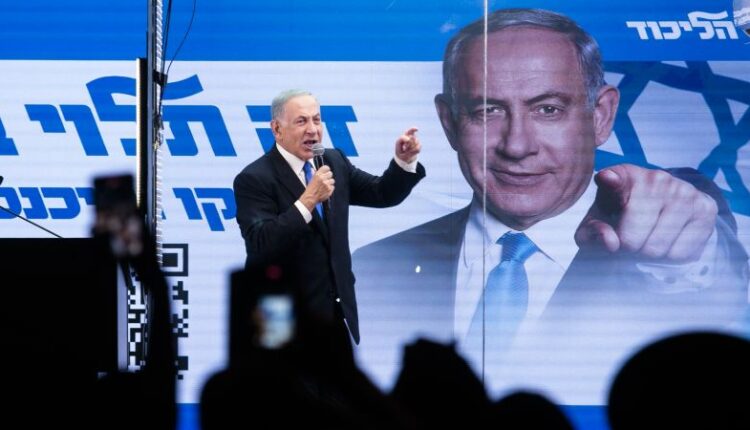 Israel’s Benjamin Netanyahu owes his victory in last week’s Israeli elections partly to a change in election rules promoted by the political opponents he is now shutting out of power, CNN analysis of the November 1 results shows.

Netanyahu and his allies are set to have a small but clear majority of seats in parliament, the Knesset, but they won the popular vote by only a razor-thin margin.

One reason his Knesset majority is bigger than his popular vote victory is that three parties in the outgoing Knesset each got less than 3.25% of the popular vote – so they get no seats in the new parliament.

The irony of the situation is that it was Avigdor Liberman of the Yisrael Beiteinu party and Yair Lapid of Yesh Atid who pushed to raise the threshold from 2% to 3.25% in 2014, when they were political allies of Netanyahu and in government with him.

Partly because of the rule change they wanted, they’re now part of the outgoing coalition that he defeated. The Lapid-Liberman coalition would have gained seats if the threshold was still 2%.

Another reason Netanyahu won decisively is that two small parties in the anti-Netanyahu camp didn’t join forces with bigger parties, one of Israel’s leading pollsters said.

If the left-wing Meretz party had run on a joint ticket with Labor, and the Arab party Balad had not broken away from the Joint List party they ran with last time, then Tuesday’s election would have produced a 60-60 deadlock, Camil Fuchs, a leading Israeli pollster, told CNN Monday.

Both parties failed to cross the threshold: Meretz won 3.2% of the popular vote and Balad took 2.9%. Together they drew less than 300,000 votes.

All the votes for those parties were effectively discarded.

The popular vote was extremely close.

If all the votes for the parties in the outgoing Knesset are counted, Netanyahu and his allies come out less than 40,000 votes ahead of their opponents, out of more than 4.7 million votes cast.

There were 40 parties running in the November 1 election, of which 13 got more than 0.5% of the popular vote.

Five of those 13 – Likud, Religious Zionism/Jewish Power, Shas, United Torah Judaism, and Jewish Home – are on the pro-Netanyahu side of Israel’s political divide. Together they took 49.6% of the popular vote, final results from the Central Election Committee show – about 2.36 million votes.

The exact number of votes per party will be certified on November 9.

But the electoral threshold rule worked in Netanyahu’s favor. Only one of the parties on his side, Jewish Home, failed to get more than 3.25% of the total vote; they got 1.2%, or 56,760 votes – and would have been forced out of the Knesset under the old 2% rule, anyway.

The threshold has been decisive in at least one previous election. Labor leader Yitzhak Rabin became prime minister in 1992 although the left lost the popular vote; a right-wing party failed to cross the threshold, which was 1.5% at the time.

Iranian lawmakers issued a letter on Sunday to the country’s leadership calling for severe punishments to be meted out to those found guilty of being involved in the protests, according to state-run Press TV.

The letter was signed by 227 of Iran’s 290 members of parliament, and it compared some of the protesters to ISIS militants.

The letter from the MPs also reiterated government claims that the ongoing protests were incited by the United States and other enemies of Iran. Iran has provided no evidence to back up its claims of foreign involvement in the protest movement.

British Prime Minister Rishi Sunak has written to the sister of jailed British-Egyptian writer and activist Alaa Abdel-Fattah, who is imprisoned in Cairo, saying he is “deeply committed” to resolving her brother’s case. In the letter to Abdel-Fattah’s sister, shared with CNN by his family, Sunak said he was “very concerned” to hear of the writer’s “deteriorating health,” adding his case “remains a priority for the British government.”

Iran acknowledged for the first time on Saturday that it had supplied Moscow with drones but said they were sent before the war in Ukraine. Foreign Minister Hossein Amirabdollahian said a “small number” of drones had been shipped a few months before Russia’s February invasion. Ukrainian President Volodymyr Zelensky accused Tehran of lying.

Sweden’s new government will distance itself from the YPG, a Kurdishmilitia, as it tries to win Turkey’s approval to join NATO, Reuters cited Sweden’s foreign minister as telling Swedish radio on Saturday.

Toomaj Salehi, An Iranian rapper who has used his politically charges lyrics to call for protests, was arrested by the Islamic Republic and charged with crimes punishable by death. The underground artist had been rebelling against the regime for years.

Iranian rapper Toomaj Salehi used music as a weapon of resistance against the Iranian regime, but that could cost him his life as he was arrested and charged with crimes punishable by death. @JomanaCNN tells his story: pic.twitter.com/vadAdRqRyK

His mission resulted in the creation of a large, three-story pyramid of nearly 1 million compressed plastic bottles, put together on display in Egypt’s Giza plateau just days ahead of the summit.

“It’s an audacious project we’re launching, with an aim of cleaning the planet every year, for the next 100 years,” Smith told the Australian Associated Press. “The goal is to be able to pull 15 million water bottles worth of rubbish out of the natural environment, every year, all around the world.”

The activist has been campaigning to reduce the proliferation of single-use plastics for years with attention-grabbing projects.

Last year, he used his start-up, Zero Co, to push Australian households to eliminate single-use plastics from their homes. And in 2020, he reportedly went snorkeling with more than 3,000 plastic bottles strapped to his back to raise awareness of the dire effects of ocean pollution.

As world leaders arrive in Egypt to begin this year’s climate summit, Smith told the Australian Associated Press that he will be sleeping in a small tent on top of his plastic-bottle pyramid.

COP27 runs from Sunday till November 18.