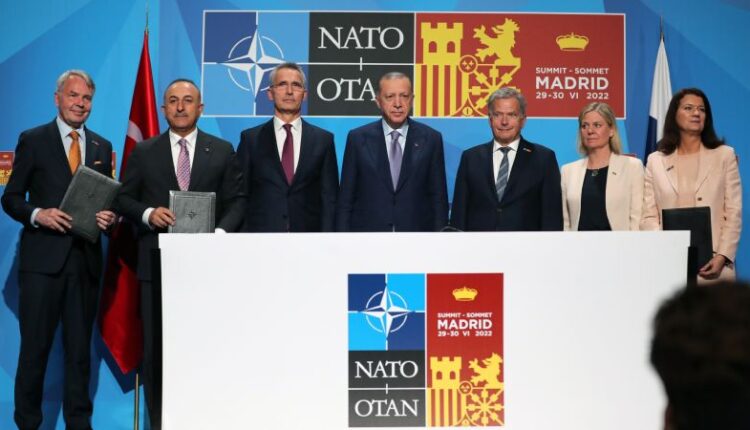 NATO formally invited Finland and Sweden to join on Wednesday after Turkey dropped its opposition following an arduous process that has served to remind the alliance of its deepening deepening fault lines.

Finnish President Sauli Niinistö said that Ankara had agreed to support the membership bids of his country and Sweden, removing a major hurdle to the two joining the alliance.

While the move was a big win for NATO and a setback for Russia, Turkish President Recep Tayyip Erdogan didn’t give in without a fair share of political chest-thumping as a display of his nation’s weight in the grouping.

Before signing a joint memorandum with the two Nordic nations, Erdogan on Tuesday declared that NATO “cannot afford” to lose Turkey as a member. He was responding to frustration in the Western alliance over Ankara’s opposition to the admission of the two traditionally neutral countries that felt compelled to join the grouping by Russia’s invasion of Ukraine.

Turkey has become a headache for NATO. But recent geopolitical events have shown that it’s one the alliance will have to tolerate. Experts say Erdogan knows that well and has used his country’s place in the grouping to serve its national interests.

In a European war that has essentially become a conflict between the Kremlin and NATO, Turkey has positioned itself as a neutral party, opting not to join its allies in sanctioning Russia while offering to mediate between the warring parties. It has supported Ukraine in the war but has been careful not to antagonize Moscow.

Experts say Turkey is today more valuable than ever to NATO. The country sits at the south-eastern flank of the alliance, a key buffer between Russia and the West. It maintains the second-largest army in the alliance after the US, and borders a swathe of Middle Eastern nations with a history of political instability, and where Western states have major interests.

Ankara, however, hasn’t always been a thorn in the side of the alliance.

Turkey joined NATO in 1952, three years after it was formed in the aftermath of World War II, and it considers the alliance to be “the cornerstone” of its defense and security policy. But analysts and historians say that while Turkey served the group’s strategic interests historically, it has become more of a disruptive force under Erdogan’s rule.

“During the Cold War, Turkey [was] well-embedded in Western security infrastructures,” said Oya Dursun-Ozkanca, a political science professor at Elizabethtown College in Pennsylvania and author of “Turkey-West Relations: The Politics of Intra-Alliance Opposition,” adding that the country had been a “fairly reliable” Western ally for over half a century.

The frequency and the intensity of disagreements between Turkey and NATO allies have however increased over time as Ankara adopts proactive and anti-Western foreign policy positions, she said.

Erdogan has disagreed with NATO allies on a number of issues, including Syria and Libya, and has used his country’s strategic location to extract concessions from his European neighbors by threatening to open the floodgates of refugees from neighboring conflict zones.

In 2009, Turkey opposed the appointment of Denmark’s Anders Fogh Rasmussen as head of NATO until then-US President Barack Obama pledged that one of Rasmussen’s deputies would be a Turk. Turkey had argued that Rasmussen’s handling of the offenses to Prophet Mohammed in a Danish newspaper in 2006 were problematic.

In perhaps its boldest and most controversial move, Turkey in 2019 bought the Russian S-400 missile defense system, calling into question a decades-long alliance with both the US and NATO. The S-400 missiles were designed to shoot down NATO planes.

“This is also a reflection of the increased unpredictability of Turkish foreign policy,” he said.

But experts say that it’s only natural that a member of an alliance will prioritize national interests where it can. The problem arises when those interests diverge from NATO’s agenda.

“The Turks complicate NATO’s consensus-based decision-making because they refuse to go with the flow until national interests are satisfied,” said Rich Outzen, a senior fellow at the Atlantic Council in Washington, DC and former US military officer and State Department official.

While Turkey understands its value to NATO, it also sees its own benefit in its membership, analysts say. Ankara has gone to NATO more than once for strategic security support, said Ulgen. “It is a security and political relationship that is mutually beneficial.

“Ultimately Turkiye and NATO do need each other,” he said, using the country’s new name.

Iran has submitted an application to become a member in the group of emerging economies known as the BRICS, an Iranian official said on Monday. Membership of the BRICS group, which includes Brazil, Russia, India, China and South Africa, “would result in added values for both sides,” Iran’s Foreign Ministry spokesperson said.

The mother of jailed Egyptian-British activist Alaa Abd el-Fattah says she is worried there could be a rapid deterioration in her son’s health after nearly 90 days on hunger strike, despite some improvements in his prison conditions. Abd el-Fattah, a 40-year-old blogger who rose to prominence with Egypt’s 2011 uprising, has become too weak to do his own washing or climb to look out of a high window in his cell, his mother Laila Soueif said.

UN estimates 1.5% of Syria’s population was killed during war

The United Nations human rights office on Tuesday said that roughly 1.5% of Syria’s pre-war population, or 306,887 civilians, were killed between 2011 and 2021 due to the conflict. The number is the highest estimate by the UN to date.

Have returned to Cairo because my family home – a houseboat on the Nile – has received a destruction order.

For 4 years, various arms of the state have been trying to force residents out so they can commercialise this little strip of river.

We now have seven days to stop it. pic.twitter.com/VPpLGICBaO

Long seen as an integral part of Cairo’s modern history and a mark of the capital’s artistic landscape, some of the River Nile’s houseboats are facing a fate similar to much of the city’s other famous features: removal for the sake of modernization.

Dozens of the floating structures line the Egyptian capital’s main river. Some are home to residents, while others are nightclubs, restaurants or cafes where the city’s artists, writers and scholars are known to gather.

Some of the houseboats are as old as 100 years, said Ahdaf Souef, a famous Egyptian novelist and owner of a houseboat that she says has been ordered for removal by the state. Many such vessels have also been featured in acclaimed Egyptian films, including the 1971 movie “Chitchat on the Nile.”

Social media campaigns have swept several platforms, with the hashtag #SaveCairoHouseboats trending on Twitter in the country after the first removals began two weeks ago.

“This is my home,” said Ahdaf Souef, speaking in a video posted on Twitter, “Others were born on these boat houses, they don’t know anything else.”

The North African country has been on a massive construction boom, backed by Egyptian President Abdel Fattah Al-Sisi.

But activists and residents have criticized the building spree, saying that the city’s heritage and character is being lost in the name of modernization.

Authorities say that each act of removal is being carefully studied and assessed to make sure that historical sites remain untouched.

In a talk show with Egyptian host Amr Adeeb, head of the Nile Protection Department in Greater Cairo, Ayman Anwar, said the orders for removal of certain houseboats began in 2020, and that notice was given to those living in them.

Anwar also noted that boats classified as “historic” by the state or those that serve touristic purposes won’t be removed. Most of the houseboats marked for removal are worn out and must be removed for safety reasons, he added.

Three houseboats have been removed since June 18, and 15 others are due for removal by June 28, Anwar said.

The value of petroleum exports by the 13-member Organization of the Petroleum Exporting Countries (OPEC) in 2021, up 77% from 2020, OPEC’s Annual Statistical Bulletin published on Tuesday showed.