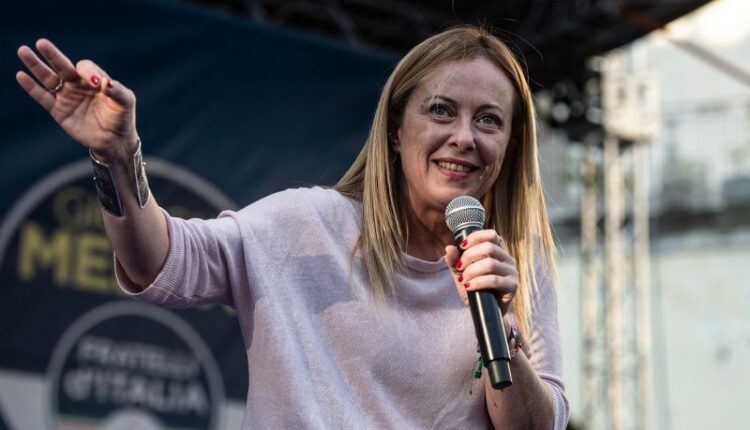 When Giorgia Meloni first burst onto the political scene in 2006 as the youngest ever vice-president of the National Alliance party, she sealed her fate as a far-right politician.

The National Alliance, formerly the Italian Social Movement, was unapologetically neo-fascist, formed by supporters of Benito Mussolini. Meloni herself openly admired the dictator as a youth, but later distanced herself from his brand of fascism – despite keeping the tricolor flame symbolizing the eternal fire on his tomb in the logo for the Brothers of Italy, the party she went on to co-found in 2012.

Her far-right Brothers of Italy party, which is polling ahead of the pack leading up to the September 25 general election, got just 4.5 percent of the vote in the last elections in 2018.

Her popularity has skyrocketed since then, in no small part because she has kept herself in the limelight with an active social media presence, and kept her party on message, never wavering from a conservative agenda that puts in question LGBT rights, abortion rights and immigration policies.

Hers was also the only mainstream party not to join the unity government formed by Mario Draghi after Giuseppe Conte’s administration fell in 2021, instead demanding new elections rather than another technocratic fix. When Draghi’s government in turn collapsed in July, Sunday’s snap election was triggered.

A darling of the global conservative movement, Meloni was a favorite protégé of Republican strategist Steve Bannon, who headlined her party conferences in Italy before the Covid-19 pandemic and his own legal trouble. Bannon recently endorsed her again, saying in a statement to CNN: “Meloni, like Thatcher, she will fight and win.”

Meloni has spoken at several US C-Pac conventions, telling the group in 2022 that conservatives are under attack.

She was raised by a single mother in Rome’s gritty leftist Garbatella neighborhood, far from the tourist attractions in the center of the capital. A group of elderly men sitting on a park bench in the district’s central square shook their heads at the mention of her name. “She doesn’t represent me,” coffee bar owner Marizio Tagliani told CNN. “She doesn’t represent this neighborhood.”

Meloni does represent a growing number of conservative Italians who agree with her ideals on the traditional family that fall in line with their powerful Catholic Church.

The unmarried mother is openly anti-LBGT, threatening that same sex unions, which were legalized in Italy in 2016, might be under review.

She has also called abortion a “tragedy” and the regions in Italy where her party is in office have already seen abortion restrictions and lack of services, including not adhering to a national policy that allows clinics to provide the abortion pill and only allowing abortions up to seven weeks, including the mandatory one-week waiting period for a woman to “reflect” on her decision – whereas the national guidelines stipulate 9 weeks.

Her partners in Italy’s center-right political alliance, Matteo Salvini and Silvio Berlusconi, are also partly responsible for her popularity. Berlusconi named her as his sports minister, during his 2008 government, making her the youngest minister to hold that position.

She regularly spars with Salvini, whose popularity has been steadily waning. For the 2018 election, she was his junior partner in the center-right alliance. This time around, she is in charge, and has hinted that, if elected, she may not give Salvini a ministerial portfolio, which would strip him of the power to potentially bring her government down.

She differs from both Salvini and Berlusconi on a number of issues, including Ukraine, and has no connection to Russian President Vladimir Putin, unlike her electoral partners, who have said they would like to review sanctions against Russia because of their impact on the Italian economy. Meloni has instead been steadfast in her support of defending Ukraine.

The prospect of a female leader in a country traditionally dominated by men has some wondering if she will be judged under a different set of rules to her male counterparts.

“We never had a female prime minister. I think we’re definitely ready for it. Long overdue, I would also add,” Dario Fabbri, a political analyst and editor of the political magazine Domino, told CNN. “But the way the whole society will receive her is something I don’t know. That’s something unknown to her and to us.”

Emiliana De Blasio, adviser for diversity and inclusion at LUISS University in Rome told CNN that Meloni’s politics are more important than her gender, but that she has not proven herself to be a feminist first.

“We need to reflect on the fact that Giorgia Meloni is not raising up at all questions on women’s rights and empowerment in general,” she said.

Fabbri acknowledges it might be easier for Meloni to find acceptance on the global stage than in Italy, where only 49% of women work outside the home, according to the World Economic Forum gender survey.

“It will depend on how she will act. How she will introduce herself to the world leaders. I think that she’s been walking a very thin line when it comes to her image, her past stances on many issues, and so far she hasn’t done many gaffes in this electoral campaign,” he told CNN.

“But of course, being at the helm of the government is something very different. So, I think the way she will be received won’t have much to do with prejudices towards Italy but on how she will introduce herself to the world leaders.”