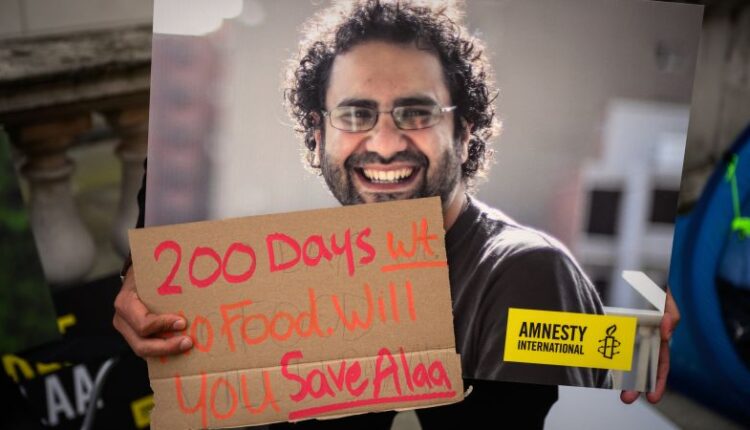 Fears have mounted for the life of writer Abd El-Fattah who escalated a more than 200-day hunger strike on Sunday by refusing to drink water.

“Let’s be very clear, we’re running out of time. So, if the authorities do not want to end up with a death they should have and could have prevented, they must act now; 24, 48 hours, 72 hours at the most, that’s how long they have to save a life,” Amnesty International Secretary-General Agnes Callamard told a news conference in Giza, Egypt, on Sunday.

Abd El-Fattah, who became a leading voice in the country’s 2011 uprising, has been imprisoned over the course of nine years. In 2019, he was sentenced to a further five years in prison for allegedly spreading false news after sharing a Facebook post highlighting human rights abuses in Egyptian jails.

Callamard said that the “extraordinarily severe human rights situation” in Egypt is “at the heart” of agenda of the COP27 summit, which kicked off in Sharm el-Sheikh, Egypt, on Sunday.

“In other words, yes it’s about climate justice but you cannot deliver climate justice anywhere in the world, including in Egypt, if you don’t have human rights protection,” Callamard told journalists.

British Prime Minister Rishi Sunak made a pledge on Sunday to raise the case of Abd El-Fattah to the Egyptian government when he attends the summit next week.

In a letter to Abd El-Fattah’s sister, Sanaa Seif, Sunak conveyed his concern regarding the activist’s “deteriorating health,” adding his case “remains a priority for the British government.”

According to Sunak, British “ministers and officials continue to press for urgent consular access to Alaa as well as calling for his release at the highest levels of the Egyptian government.”

In a letter written to Sunak and shared with CNN, Seif said: “It is my sincere belief that if Alaa is not released within the coming days that he will die in person, quite possibly while you are in Egypt.”

Abd El-Fattah’s mother was born in London in 1956 and in 2021 he acquired British citizenship, according to the Free Alaa campaign website. Since then, it has been his right to a consular visit by representatives of the British embassy, a right that has so far been refused by Egypt, Free Alaa said.

The Free Alaa campaign says Abd El-Fattah has been on hunger strike since April 2.

Ethiopia: Warring parties agree to a truce in two-year civil war. Here’s what to know