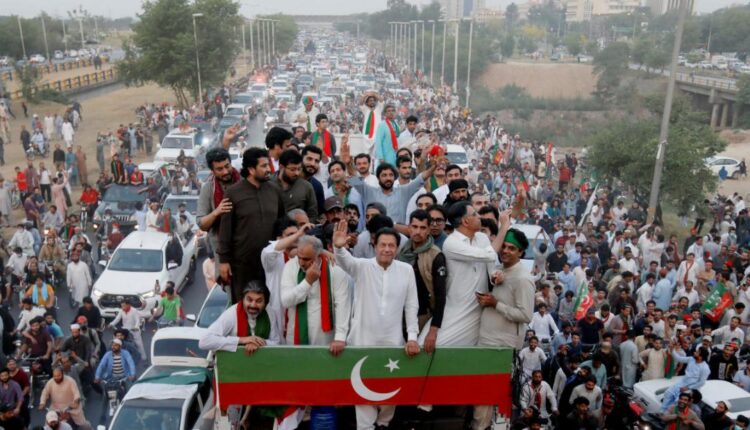 Khan was speaking early Thursday in the capital, Islamabad, at what he said would be “the biggest ever protest” in the country’s history, after demonstrators clashed with security personnel and he was forced to curtail the event.

But his announcement came with a warning: “I’m giving this imported government six days to declare new elections. Otherwise, I will re-enter Islamabad with 2 million people.”

Rapturous cries of support and chants of outrage against the US and the current Pakistani administration, reverberated through the crowd.

Khan’s claims of a US-led conspiracy against him have become a staple at the many rallies he has held across Pakistan in a bid to return to power following his ouster on April 10 in a parliamentary no-confidence vote.

The claims have struck a chord with a young population in a country where anti-American sentiment is common and anti-establishment feelings are being fueled by a rising cost of living crisis.

But Khan’s critics say there’s a problem with his claims: there is no evidence of a conspiracy.

Both the US and Pakistan’s military have vigorously denied Khan’s allegations, and the former Prime Minister has refused to offer anything substantive to back them up.

“Imran Khan is trying to tap into anti-American sentiments to mobilize support,” said Maleeha Lodhi, a former Pakistani ambassador to the US and the United Nations. Khan’s “loyal band of supporters [are] ready to discard facts and believe his foreign conspiracy narrative even though there isn’t a shred of evidence to support it.”

The aim, Lodhi said, is clear: Khan sees playing on decades-long animosities as his route back to power.

What are Khan’s conspiracy claims

Khan has repeatedly claimed that Donald Lu, assistant secretary of the US Bureau of South and Central Asian Affairs, met Pakistan’s ambassador to Washington in March and told him that Khan should be dismissed from power in the no-confidence vote.

Khan told CNN Monday that Lu had threatened Pakistan would “suffer consequences” unless he was removed from power.

“There is no truth to these allegations,” a US State Department spokesperson told CNN, having previously denied involvement in Khan’s ouster.

When asked to provide evidence for his claims, Khan said there were note takers on both the US and Pakistani sides at the meeting, but did not answer directly when asked whether he would make any notes public — for each of the allegations.

He also said with evidence that a cipher — an encoded diplomatic cable — outlining the details of the meeting sent from the Pakistani ambassador had been forwarded to Pakistan’s cabinet. Khan claimed he presented the minutes from that meeting to Pakistan’s National Security Council (NSC).

The NSC last month staunchly rejected Khan’s accusations, saying in a statement they have “found no evidence of any conspiracy.”

Khan has also said he is aware that his official visit to Moscow in late February, coinciding with the day of Russia’s invasion of Ukraine, likely rankled American officials.

Khan has also previously accused Pakistan’s military and opposition led by current Prime Minister Shehbaz Sharif of conspiring with the US, which they both deny.

“People are so incensed and feel insulted that these criminals have been foisted upon us,” Khan said.

A history of distrust

To understand how even the flimsiest of conspiracy theories could prove such a potent rallying tool in this South Asian democracy of 220 million people, experts point to mutual distrust that has been festering for decades.

In fact, they are “believable,” he said.

Much of the distrust stems from events in neighboring Afghanistan, where many Pakistanis blame US actions for destablilizing their own country — including attacks by Afghanistan-based militants on Pakistani soil.

Fresh in Pakistani minds are the chaotic scenes of Afghans, desperate to escape the advancing Taliban, clinging to the wheels of planes taking off from Kabul airport in August 2021. And as the security situation deteriorates, many Pakistanis sense it is they who will pay the price.

The 2001 US invasion of Afghanistan following the September 11 attacks — when it launched its hunt for Osama bin Laden and his al Qaeda terrorist network — only deepened the divide.

While Pakistan was early to sign up to George W. Bush’s “war on terror,” many in the Muslim-majority country saw the invasion — and the subsequent war in Iraq — as targeting Islam.

A string of wartime controversies exacerbated this feeling; Islamabad accused the US of killing thousands of Pakistanis in drone attacks on Pakistani soil and felt humiliated when the US did not give it advance warning of US Navy Seals’ raid on Bin Laden’s hideout in the Pakistani military town of Abbottabad in 2011.
Its anger was exacerbated by a fake vaccination program the CIA carried out in a bid to collect DNA samples to verify Bin Laden’s presence at the compound. The operation was a success in American eyes, but Pakistanis responded with vaccine skepticism, anger and violence.
In 2011, an American CIA contractor named Raymond Davis killed two Pakistani men in Lahore. Davis claimed he shot the men in self-defense when they attempted to rob him at gunpoint, but authorities at the time called the case “clear-cut murder.”

He was charged with murder and illegal possession of a firearm, but was acquitted after more than $2 million in compensation was paid to the victims’ families. The incident heightened tensions between the two nations, with Congress warning Pakistani leaders that billions of dollars in US aid could be jeopardized without Davis’ release.

Such events have caused “irreparable damage to trust,” according to Hassan Kamal Wattoo, a lawyer and columnist in Islamabad, who added it is “lending credibility to the belief that shadowy figures are plotting against Pakistan from afar.”

This troubled history goes some way to explaining why even when Khan was in office — apart from a brief period of congeniality with former US President Donald Trump — he was keen to play the anti-American card.

Now he is seeking a return to power, Khan is reaching for a familiar tool to rally support, said Madiha Afzal, a foreign policy fellow at The Brookings Institution.

“This is part of a long history of conspiracy theories gaining traction in Pakistan, especially about the West’s role in the country,” she said.

“It is something his supporters believe blindly.”

Khan’s stellar cricket career has ensured his enduring appeal with voters. Riding a wave of popular support, he was elected four years ago on a promise to eradicate poverty and corruption and to build a “new Pakistan.”

According to Brookings Institute’s Afzal, Khan’s supporters have been drawn by the former Prime Minister’s argument that it’s the corruption of the traditional parties “that have ruled Pakistan through much of its democratic period that is at the root of Pakistan’s problems.”

Pakistan’s Prime Minister Shehbaz Sharif — who led the campaign to remove Khan as prime minister along with his his ruling Pakistan Muslim League-N party — is a steel dynasty scion who faces unresolved corruption charges.
His brother Nawaz Sharif is a three-time former Prime Minister who has been charged with corruption and has been barred by Pakistan’s highest court from holding political office.

According to former ambassador Lodhi, there is now “a wave of sympathy for Khan” because of how he was overthrown.

And Wattoo, the lawyer, said Khan’s supporters see him as a “wildly independent, fearless alternative to a more conventional political elite.”

It’s yet to be seen whether that support will be enough to return Khan to power. But what seems clear is that, more than a month into office, Shehbaz Sharif’s government has done little to get to grips with the rising inflation and mounting economic crisis that contributed to Khan’s ouster.

While the government on Thursday lifted a cap on fuel prices, which will allow a much-needed deal with the International Monetary Fund (IMF) to go through, Karachi-based finance journalist Ariba Shahid said the jostling for power was only making things more difficult.

“This need for political clout is costing the average Pakistani long-term inflation, a fast-depreciating rupee, and eventually greater taxes to make up for the large deficit,” she said.

To his supporters — primarily young, middle class and tired of corruption and the political elite — Khan is still the obvious choice as the country’s leader.

“(His ouster) gave him victimhood and made him a political tragedy,” Nadim said, adding they were “two very powerful emotions” that had galvanized Khan’s public support.