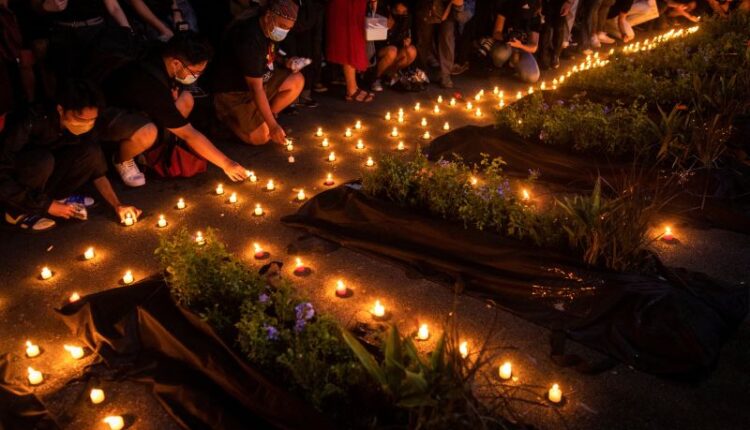 When Philippine President Ferdinand “Bongbong” Marcos Jnr. met US President Joe Biden in New York last week, there was an uncomfortable sense of deja vu for some older Filipinos.

But it was not so much that the visit came 40 years after Marcos’ father and namesake was welcomed to Washington by President Ronald Reagan.

It was that it also came 50 years – almost to the very day – after Marcos Snr. placed his country under martial law, kick-starting a notorious 14-year period in which thousands of people were killed, tortured and imprisoned.

As Marcos Jnr. went on a six-day charm offensive, attending the United Nations General Assembly and meeting the World Bank and business groups, back in the Southeast Asian island nation thousands of people gathered to remember the victims who had suffered under his father’s watch. They held exhibitions, documentary screenings and seminars to recount the stories of abuse that took place after martial law was imposed on September 21, 1972, and announced to the public two days later.

Their main hope was to make sure those atrocities will never be forgotten or repeated, yet many among them fear that Marcos Jnr.’s ascent to the world stage is just one more step in rehabilitating the family’s name – and that not only are the crimes of his dictator father being swept under the carpet, but that more recent abuses are being ignored too.

Loretta Ann Rosales, a history teacher and human rights activist, remembers being tortured by police and the military during the martial law period.

She was arrested twice in the 1970s for taking part in street protests after some of her students informed the authorities she had criticized the regime of Marcos Snr.

Her captors poured burning candle wax over her arms partially suffocated her with a belt and subjected her to waterboarding for hours on end.

In her worst experience, her torturers clipped wires to her arms and feet and gave her electric shocks that made her body convulse.

Now, at 83-years-old, she counts herself as lucky for having survived, and has dedicated her life to human rights activism and making sure such atrocities never happen again.

The Philippines has officially recognized that 11,103 people were tortured and abused during the martial law period. There were also 2,326 killings and disappearances between 1972 and 1986, before Marcos Snr. was ousted in a popular uprising. They are commemorated by the government-funded Human Rights Violations Victims’ Memorial Commission.

But the true number of victims could be far higher. According to Amnesty International, at least 50,000 people were arrested and detained under martial law from 1972 to 1975 alone, among them church workers, human rights activists, legal aid lawyers, labor leaders and journalists.

What Rosales and other survivors fear is that the lessons of that era are in danger of being forgotten.

Marcos Jnr., who was democratically elected in May with a massive majority, has defended his father and refused to apologize for his actions. He has said it is wrong to call his father a dictator and, during his campaign for the presidency, he praised Marcos Snr. as a “political genius.”

“The fight for human rights in the Philippines started 50 years ago, and that continues on today,” Rosales said.

“What we’re fighting against is historical distortion, to not be silenced, to not be forgotten,” she added.

Survivors fear it is not only that the past is being distorted, but the present too.

Marcos Jnr.’s predecessor as President, Rodrigo Duterte, has been widely criticized by human rights bodies for his war on drugs, in which Philippine police have allegedly carried out 6,235 extrajudicial killings since 2016, according to a government report.

Duterte withdrew the Philippines from the International Criminal Court in 2018, weeks after its prosecutor said it planned to investigate the drug war killings. Marcos Jnr. – whose vice president is Duterte’s daughter, Sara – has refused to rejoin the court.

Meanwhile, rights groups say activists and independent journalists remain the targets of violence and threats in the country.

“The human rights situation in the Philippines remains poor, and so far, Marcos has shown no inclination to substantively change it,” he said.

When Marcos Snr. visited Reagan in 1982, there were protests over his human rights record – but they fell on deaf ears. It was the height of the Cold War and back then Washington saw the Philippines, home to US military bases, as a key ally in Asia.

Relations between the US and the Philippines remain strong. And with China challenging US military dominance in Asia, the importance of that relationship has taken on renewed significance in recent years.

Given the strategic importance of the relationship, activists hold little hope of the US exerting pressure on Manila to call out the violence and economic plunder that happened during Marcos Snr.’s rule.

They point out that it was to Hawaii where Marcos Snr. and family fled after being deposed in the People Power revolution (after Marcos Snr.’s death in 1989, other members of the family were allowed to return to the Philippines).

At their meeting on September 22, Biden referred to Marcos Jnr.’s landslide election win as “a great victory” and talked of the “critical importance” of the US-Philippine alliance.

A White House readout of the meeting also said the pair had discussed “the importance of respect for human rights,” but Rosales was unimpressed.

“(Marcos) never mentioned martial law and the atrocities of the military against the people… much less the killings of innocent people suspected of peddling drugs. Those are the concrete realities on the ground,” Rosales said.

What Rosales and others would like to see is an acknowledgment from Marcos Jnr. of the wrongs that occurred under his father’s watch – and an assurance it won’t happen again.