India’s Modi tells Russia’s Putin: Now is not the time for war 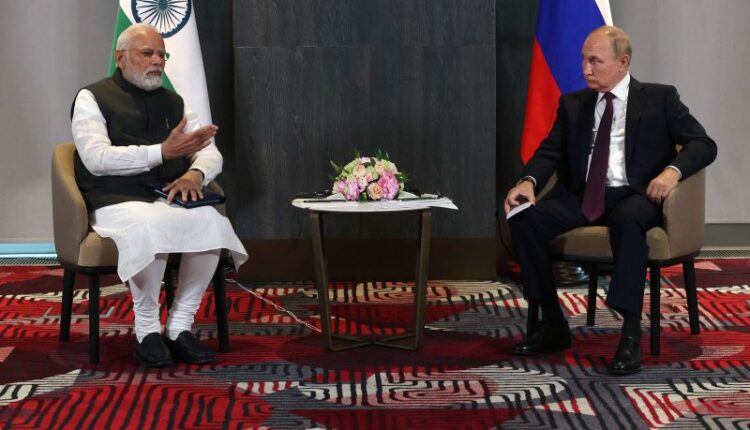 In what was the latest in a series of setbacks for the Russian leader, Modi told him of the need to “move onto a path of peace” and reminded him of the importance of “democracy, diplomacy and dialogue”.

The comments from Modi came during a face-to-face meeting on Friday, on the sidelines of a regional summit, and highlighted Russia’s increasing isolation on the diplomatic stage. They came just a day after Putin conceded that China, too, had “questions and concerns” over the invasion.

“I know that today’s era is not of war and we have talked to you many times over the phone on the subject that democracy and diplomacy and dialogue are all these things that touch the world,” Modi told Putin during the Shanghai Cooperation Organization summit in the city of Samarkand in Uzbekistan.

“We will definitely get a chance to discuss how we can move onto the path of peace in the coming days, I will also get an opportunity to understand your point of view,” he added, according to a readout of the meeting by India’s Ministry of External Affairs.

Putin responded by telling the Indian leader that he was aware of his concerns.

Modi’s apparent criticism of Russia’s invasion is only the latest setback for Putin, whose forces have suffered a series of major defeats on the battlefield in recent weeks. Ukraine claims to have recaptured some 8,000 square kilometers of territory.

Diplomatically, Moscow also appears to be on a losing streak and this has been highlighted by exchanges at the summit in Samarkand, which brings together leaders from Russia, China, India, Pakistan, Iran and four Central Asian countries.

It had seemed that Moscow and Beijing would be keen to present a united front at the summit to counterbalance the United States and its allies.

However, signs of divisions have emerged over Russia’s invasion, which has unsettled the leaders of former Soviet territories in Central Asia who are worried that Russia could encroach on their land too.

India and China are the biggest customers of Russian oil and the suggestions over the past days that both have reservations over the war give Moscow much to think about.

Earlier in the summit, after acknowledging China’s concerns, Putin had said, “We highly value the balanced position of our Chinese friends when it comes to the Ukraine crisis.”

Xi and Putin met for the first time since the war. Hear what they discussed

New Delhi, like Beijing, has strong ties with Moscow dating back to the Cold War and so far has largely steered clear of condemning outright the invasion by Russia, which remains India’s biggest arms supplier.

In a statement released after Friday’s meeting, India’s Ministry of External Affairs said discussions between the two leaders “also pertained to global food security, energy security and availability of fertilizers in the context of the challenges emanating from the current geo-political situation.”

“They agreed to remain in touch,” the ministry added.

The meeting comes as heavy shelling continues in areas of southern and eastern Ukraine that have been taken back from Russian forces. Ukrainian officials said they had uncovered at least 440 graves at a mass burial site in the city of Izium in the recently liberated Kharkiv region.

Suikoden I And Suikoden II Remasters Revealed, Releasing On Consoles And PC Next Year