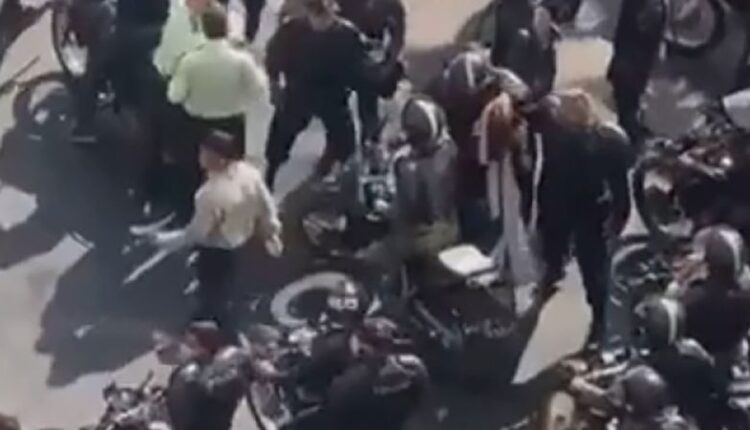 Video from Tehran has shown a large group of male security forces surrounding and grabbing a female in the street.

They eventually let her go and she hurries away quickly. The clip has been shared widely on Persian language news channels outside Iran.

Iran’s Vice President for Women and Family Affairs, Ansieh Khazali, told Iranian state media ISNA that disrespect to women is not acceptable by any group or organization. Khazali says she asked police officials to send a report on the cause of the incident and if wrongdoing is found then the officer should be dealt with.

Tehran’s Capital Police Information Center say they’re looking into the incident and that any behavior that doesn’t follow rules and regulations is unacceptable, according to a statement on ISNA.

Police say the female in the video was a ringleader of women’s rights protests in Argentine Square.

Girls and woman have led the nationwide protest movement that gripped Iran following the death of a young woman in police custody.

In September, 22-year-old Mahsa Amini died after she was detained by the country’s morality police for apparently not wearing her hijab properly. Iranian authorities have since unleashed a brutal crackdown on demonstrators, who have united around a range of grievances with the country’s authoritarian regime.

At least 23 children – some as young as 11 – were killed by security forces in the last 10 days of September alone, the report said.

Earlier this week, an Iranian official also admitted that school students participating in street protests are being detained and taken to psychiatric institutions.

The Iranian government’s ferocious crackdown on demonstrators has caught the attention of world leaders.

The US issued sanctions on seven senior Iranian officials, with President Joe Biden pledging further costs “on perpetrators of violence against peaceful protesters.”

UN Secretary General António Guterres said he was “concerned about reports of peaceful protests being met with excessive use of force leading to dozens of deaths and injuries.”

On Tuesday, the United Nations’ children’s agency UNICEF called for the protection of children and adolescents amid the public unrest.

“We are extremely concerned by continuing reports of children and adolescents being killed, injured and detained amid the ongoing public unrest in Iran,” the UNICEF statement read.

Hellena Taylor Says Bayonetta 3 Absence Due To “Immoral” Compensation, Calls For Fans To Boycott The Game