Iraq: Powerful cleric tells supporters to stand down after day of violence in Baghdad 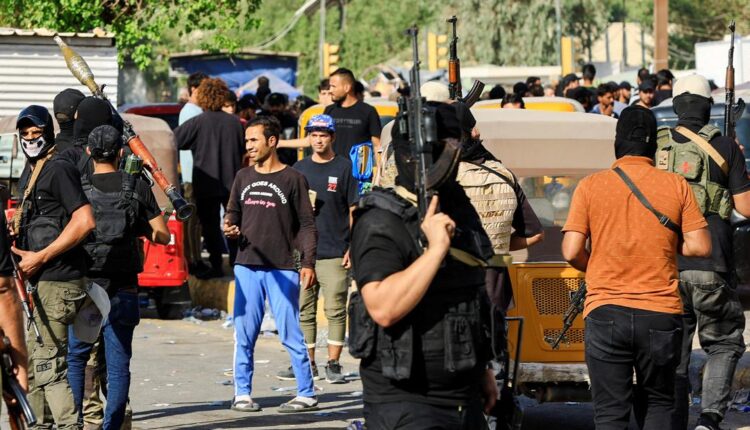 His backers subsequently stormed the capital’s heavily fortified Green Zone and the Republican Palace, where the cabinet meets. Protesters were seen swimming in the palace’s pool and waving Iraqi flags, while others clashed with Iraqi security forces in what turned out to be some of the deadliest violence seen in Baghdad in years.

On Tuesday, al-Sadr apologized to the Iraqi people and ordered his supporters to withdraw from the Green Zone, giving them an ultimatum.

“If [protesters] do not withdraw, including from parliament, within 60 minutes I will disavow the movement itself,” he said during a press conference in the holy city of Najaf.

Senior Iraqi officials including the outgoing Prime Minister Mustafa al-Kadhimi had urged al-Sadr to call on his supporters to withdraw from the Green Zone. In his address, al-Sadr thanked government forces for “remaining neutral” during the crisis.

“I am walking, with my head bowed, and I apologize to the Iraqi people who are the only ones that have been harmed,” he said.

Minutes later, the Iraqi military said it would lift a nationwide curfew that was imposed on Monday. The United Nations Assistance Mission in Iraq (UNAMI) welcomed the “recent moderate declaration” by al-Sadr.

While there was relative calm in Baghdad on Tuesday following al-Sadr’s speech, the episode risks plunging the country deeper into crisis as it remains in a political vacuum. Iraq has been without a functioning government for 10 months now, with political parties stuck in a deadlock on who should lead the next cabinet.

A court session to dissolve parliament on Tuesday was delayed by Iraq’s federal court because of the protests.

Al-Sadr is immensely popular in the country and for years has positioned himself against the United States and Iran, which wields significant sway in Iraq.

In October, al-Sadr’s Shia bloc emerged as the biggest winner in elections that threatened to sideline the rival Iran-aligned Shia blocs which have long dominated the oil-rich country’s politics.

But al-Sadr’s attempts to form a government have since foundered amid opposition from rival blocs. In an apparent show of force, al-Sadr decided in June to order his entire political bloc to withdraw from parliament.

On Tuesday, al-Kadhimi welcomed al-Sadr’s call for his supporters to stand down, saying everyone had a “moral and national responsibility to protect Iraq’s capabilities, stop the language of political and security escalation, and initiate a quick and fruitful dialogue to resolve the crisis.”

Iran closed its borders with Iraq following the violence and canceled some flights to Baghdad, according to Iran’s state news agency IRNA. Iran’s Embassy in Baghdad also asked Iranians in Iraq to avoid traveling to the capital, as well as the cities of Kadhimiya and Samarra, IRNA added.