Iyene Essien: Is this Nigerian teen the next women’s golf prodigy? 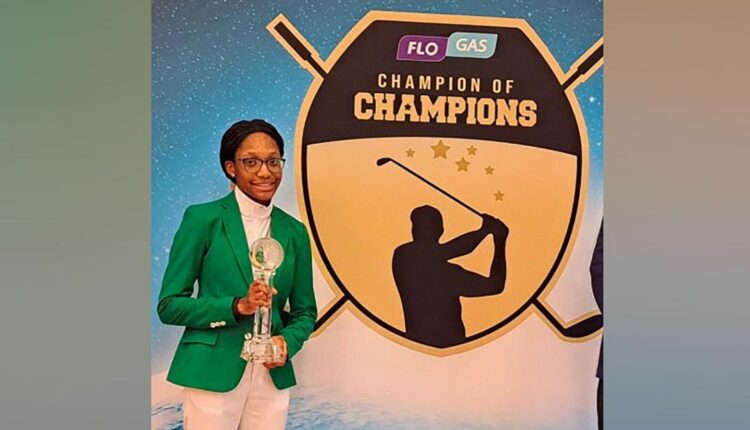 “(My father) was pretty surprised by my question,” she said. “He asked me if I really wanted to play this sport and I said, ‘yes,’ and he got me a coach and I started playing golf.”

The rest was history.

Essien entered her first competition the same year and proved to be a natural, placing first in her age group. “I found that really cool,” she said.

By age 11, the golfer was representing Nigeria at international competitions across the US, UK, and Africa including Morocco, Botswana, and South Africa. Now 16, she is the No.1 ranked junior girls’ golfer in Nigeria and has won more than a dozen trophies after placing in various competitions.

“I’m really proud of representing my country because I’m making a name for myself and for my country,” she said.

In late July, Essien clinched second place in the Under 19 Girls division at the Champion of Champions World Championship in Northern Ireland. “It was a really good experience for me,” she said. Finishing five strokes behind first, Essein says she is proud of how she played.

“Everything happens for a reason — even though you come second or third, it means that you’re getting closer and closer to first,” she said, noting the experience of playing on a world-renowned course was a win in itself. “The fact that I could play on the same course as Rory Mcllroy played on and be in the same vicinity of all that history was really very important to me.”

As she continues to make a name for herself and her country, Nigerian president Muhammadu Buhari is taking notice. Following the tournament, the president’s adviser released a statement saying Buhari, “joins all Nigerians in celebrating this great teenager who is doing so much for the country.”

“It was really unexpected, and I appreciate it,” Essien told CNN in response.

Time and time again, Essien has proven she isn’t afraid of a challenge. While she often finds herself competing against older players, she says it actually “gives me even more motivation just to do better.”

She says her positivity and drive is inspired by one of her greatest role models, Tiger Woods.

“He has shown a lot of resilience in the game,” she said, noting his efforts to push through a series of injuries and career setbacks. “He just keeps playing golf and he really loves the sport, even though he’s not winning.”

Essien is not the first Nigerian golfer to have to look elsewhere for role models. Georgia Ohoh, the first Nigerian to play in the Ladies European Tour, previously told CNN she had to turn to tennis to find inspirational athletes.
That’s in part because golf is far from the most popular sport in Nigeria. According to the Nigerian Golf Federation, there are only 58 courses in the country. In 2012, it was estimated there were only about 200,000 golfers out of a population of than 200 million people (by comparison, more than 25 million Americans played golf that same year).
Related: Former Super Bowl champion Osi Umenyiora is creating a new path for African talent to make it to the NFL

Essien says the absence of a more established golfing program has been challenging, particularly when it comes to financing.

She says her family has been “instrumental” in funding her career, but it’s been a “struggle” and believes, “if I had a huge pot to work with, I would have done more competitions over the years than I did and won more trophies.”

Wanting to pursue more opportunities, Essien, who was born in the state of New York but raised in Nigeria, moved back to the US in 2021 to enroll in the Taft School in Watertown, Connecticut.

“The competition is high (in the US),” Essien said. On an average day, the teenager says she typically practices for three hours after class, and it can be difficult to navigate the delicate dance between pursuing a professional career and being an “average” teen.

“Sometimes I actually really want to go hang out my friends and just relax and be a teenager basically. But there are also priorities. I have to remember that if I want to be in a higher place in golf or in school then I have to put in the time in the work,” she said.

Inspiring the next generation

In addition to becoming a golf pro, Essien wants to pursue a degree in engineering with a specialization in artificial intelligence.

“I hope to get a golf scholarship to a (top) university… and if it becomes possible, I hope to play in the LPGA,” she said.

Related: What it’s like to circumnavigate Lesotho on foot — in 16 days

With a budding career ahead, she also hopes to pave the way for other Nigerians for follow in her footsteps.

“I hope my achievements and where I am right now in golf can actually motivate Nigerians who want to play golf,” she said, leaving aspiring golfers with this piece of advice: “work hard and keep a good mentality because everything happens for a reason and in due time, everything will go your way.”