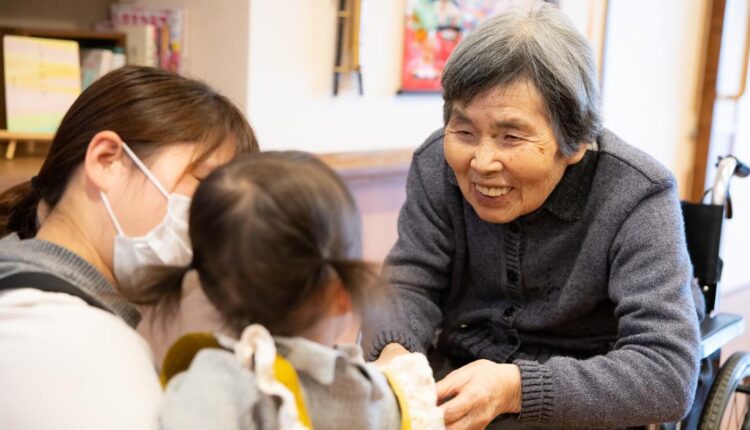 The generous compensation package from the Moyai Seiyukai home in Kitakyushu city includes flexible hours, baby formula and diapers — and cups of tea at the in-house cafe for accompanying mothers.

In return, the new recruits — who must be age 3 or under — are being asked to “visit whenever you want” and “walk around as much as you like.”

The recruitment drive is the brainchild of Gondo Kimie, head of the facility, which is home to about 120 elderly residents.

She hit upon the idea after noticing how residents cheered up when her infant grandchild began visiting the home about two years ago. Other staff members sometimes brought their babies to the facility too, and “when elderly residents saw them, they smiled,” Gondo said. “The atmosphere was good.”

So, the home began distributing leaflets around the neighborhood and posting open calls for babies on social media.

The program began with just one baby in 2021, and has now grown to 32 infant “employees,” mostly from families in the area, Gondo said.

And it has been a roaring success among the residents. Many smile just watching the babies from a distance, while some in wheelchairs push themselves over to interact with the children, she added.

“Even the people who usually don’t speak much and don’t smile a lot or don’t move, as soon as they see the babies, their facial expressions get brighter,” Gondo said.

Not only do the visits help to combat the public image of care homes as being depressing and lonely places, they are therapeutic in giving the residents a much-needed source of social interaction, she said.

Babies who visit frequently can develop close relationships with the residents, Gondo added.

“I hope that when (the children) start going to elementary school or junior high school, they continue to visit this center like their home anytime,” she said.