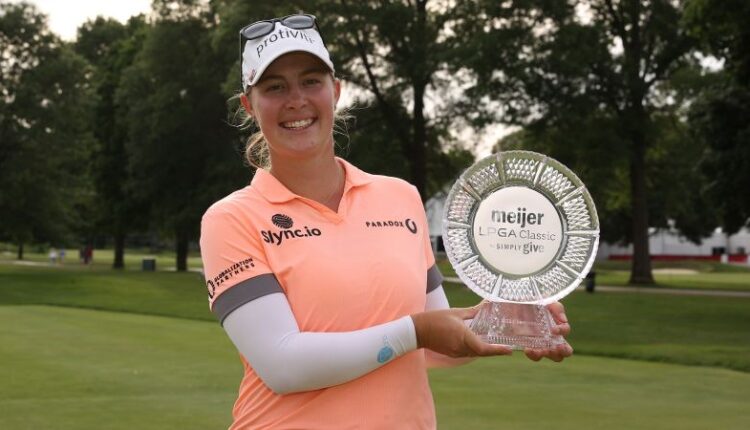 Jennifer Kupcho won the Meijer LPGA Classic to claim her second win of the season in a dramatic sudden-death playoff.

Locked in the playoff with Ireland’s Leona Maguire and fellow American Nelly Korda, Kupcho missed a two-foot eagle putt for victory on the first hole.

She tapped in for a birdie which was matched by Maguire while defending champion Korda could only manage par and was eliminated from the playoff.

But at the second opportunity, Kupcho did not falter. Another birdie on the second sudden-death hole sealed victory – her second of the season after she won her first major championship at the Chevron Championship in April.

“I think this one is even better than the first personally,” Kupcho told the LPGA afterwards. “I had such a big lead going into the final round at Chevron, so to come out of this one with top-ranked players all over the place, the leaderboard was packed, within strokes so it was very close, and I feel very proud of myself for coming out of it.

“I thought to myself this morning that I should call (my dad), but I kept telling myself, ‘No, we’ll call him after the round with the trophy in our hand,’ and I’m excited I can do that now.”

The playoff capped a roller coaster last day for Kupcho after she carded an early double bogey on the third hole and a bogey on the sixth to fall three shots behind overnight leader Korda. An eagle on the eighth and a birdie on the ninth undid the damage before birdies on the 12th and 14th propelled her into the lead.

“I struggled a little bit at the beginning, so it tells me I can really come back from it,” Kupcho said, according to ESPN. “I’ve always known I’m a back-nine player and that definitely came into effect today.”

Playing in a group ahead of the American pair, Maguire surged into contention, carding 65 in her final round to close the seven-shot gap which had separated her from the overnight lead.

She birdied the last hole to set the benchmark at 18 under par.

Korda also birdied the last hole while Kupcho settled for par after her drive found a bunker, leaving all three players tied at the top of the leaderboard ahead of the playoff.

“Unfortunately, sometimes you have it and sometimes you don’t,” runner-up Korda told the LPGA after only her second competitive start following a three-month hiatus due to a blood clot.

“If you told me I think three, four months ago when I was in the ER that I would be here, I would being extremely happy.”