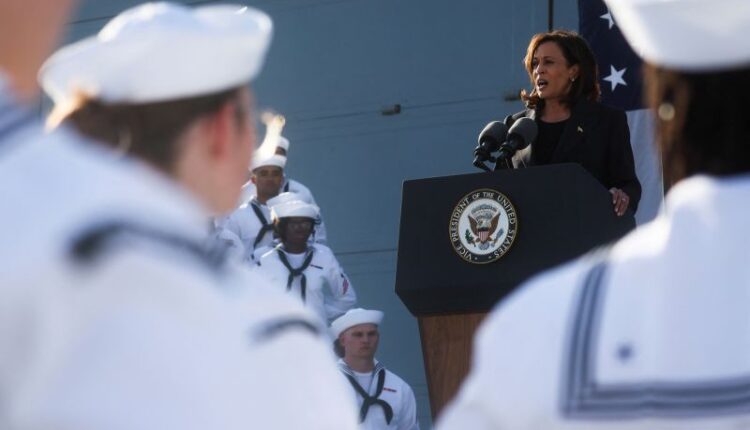 Harris, speaking aboard the USS Howard at the Yokosuka Naval Base in Japan, also echoed President Joe Biden’s recent comments backing Taiwan, saying the US will “continue to oppose any unilateral change to the status quo. And we will continue to support Taiwan’s self-defense, consistent with our long-standing policy.”

Harris’ remarks come at a time when tensions between Beijing and Taipei are at the highest they’ve been in recent decades, with the Chinese military holding major military drills near the island.

“China is undermining key elements of the international rules-based order. China has challenged freedom of the seas. China has flexed its military and economic might to coerce and intimidate its neighbors,” Harris said in the speech.

She added that the United States believes peace and stability in the Taiwan Strait is “an essential feature of a free and open Indo-Pacific.”

“We will continue to fly, sail, and operate, undaunted and unafraid, wherever and whenever international law allows.”

The US has a “profound stake in the future of this region,” Harris told US troops, saying their presence in the Indo-Pacific region “is in pursuit of peace and stability, and to support our allies and partners.”

Harris is in the region to lead a presidential delegation for the state funeral of former Japanese Prime Minister Shinzo Abe, which was held on Tuesday, and to meet with government officials from Japan, South Korea and Australia.

After Japan, Harris will travel to South Korea, where she is expected to visit the demilitarized zone between North Korea and South Korea on Thursday.