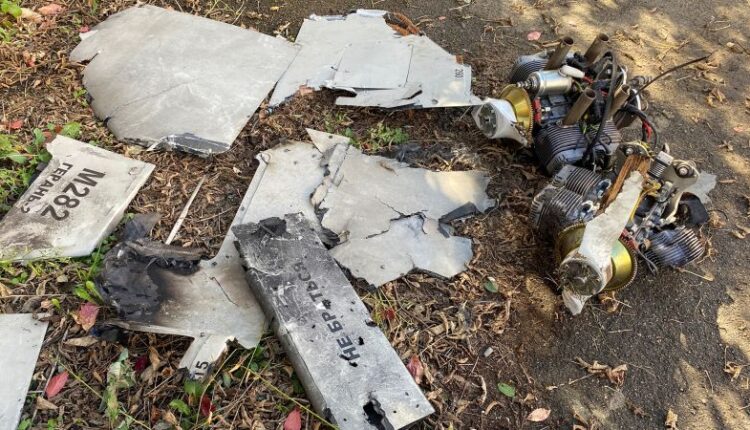 Russia has launched a series of “kamikaze” drone attacks across Ukraine in recent weeks, striking civilian infrastructure and sowing terror in Ukrainian cities far from the frontlines of the war.

The Ukrainian government says Kyiv, Vinnytsia, Odesa, Zaporizhzhia and other cities have suffered a barrage of drone attacks, and pleaded with Western countries to step up their assistance in the face of the new challenge.

Drones have played a significant role in the conflict since Russia launched its full-scale invasion of Ukraine in late February, but their use has increased since Moscow acquired new drones from Iran over the summer.

The Ukrainians themselves have been using kamikaze drones to strike against Russian targets – and asked their allies to supply them with more of these deadly weapons.

Here’s what we know about these drones.

Kamikaze drones, or suicide drones, are a type of aerial weapon system. They are known as a loitering munition because they are capable of waiting for some time in an area identified as a potential target and only strike once an enemy asset is identified.

They are small, portable and can be easily launched, but their main advantage is that they are hard to detect and can be fired from a distance.

The name “kamikaze” refers to the fact the drones are disposable. They are designed to hit behind the enemy lines and are destroyed in the attack – unlike the more traditional, larger and faster military drones that return home after dropping missiles.

The Ukrainian military and US intelligence say Russia is using Iranian-made attack drones. US officials told CNN in July that Iran had begun showcasing Shahed series drones to Russia at Kashan Airfield south of Tehran the previous month.

In August, US officials said Russia had bought these drones and was training its forces how to use them. According to Ukraine’s President Volodymyr Zelensky, Russia has ordered 2,400 Shahed-136 drones from Iran.

Iran has denied supplying weapons to Russia despite evidence to the contrary. Iranian Foreign Minister Spokesman Nasser Kanaani was quoted by the state news agency IRNA on Monday as saying “Iran has repeatedly declared that it is not a party in the war between Russia and Ukraine and has not sent any weapons to either side.”

But Ukraine claimed its forces had shot down one of these drones for the first time last month near the city of Kupyansk in Kharkiv. There have been more reported attacks since then. Kyiv’s military said Wednesday it had downed 17 Shahed-136 drones that day alone. According to photos released by Ukrainian authorities, Russia has rebranded the Shaheds and is using them under the name of “Geran.”

US officials say there has been “some evidence already” that the Iranian drones “have already experienced numerous failures” on the battlefield.

US Deputy Undersecretary of Defense for Policy Sasha Baker told reporters late last month that “the idea that they represent some technological leap ahead, frankly we’re just not seeing borne out in the data.”

Moscow also has its own kamikaze drones, made by the Russian weapons manufacturer Kalashnikov Concern. Ukraine claimed on Wednesday it had shot down two of these ZALA Lancet drones that day.

While relatively small, the Shahed drones are capable of carrying missiles and have a payload of approximately 50 kilograms (110 pounds). That means they can inflicted significant damage.

“So the Russians are using these fairly unsophisticated drones against large targets like cities. As you mention there is no military utility to these attacks, this is about Putin satisfying hardliners in Russia they were in ecstasy last week after the missile attacks and probably will be after these ones,” he said.

Drone attacks can have major impact on the civilian population. Zelensky accused Moscow of using them to spread terror among civilians.

“All night and all morning, the enemy terrorizes the civilian population. Kamikaze drones and missiles are attacking all of Ukraine,” he said Monday.

In a statement last week, the International Red Cross denounced the use of the drones, saying the use of explosive weapons in populated areas causes mental and psychological harm as well as life-threatening injuries.

Ukraine has been asking its allies for air defense systems since the beginning of the war in February, but the need has become more urgent since Russia started using the Iranian-made drones.

Air defense systems were one of the top three priorities on a Ukrainian weapons wish list presented during a Ukraine Defense Contact Group meeting in Brussels on Wednesday, according to a handout provided to defense ministers participating in the gathering.

Gen. Mark Milley, chairman of the US Joint Chiefs of Staff, told reporters after the meeting on Wednesday that the US and its allies needed to provide Ukraine with air defense systems in order for Ukraine to help defend its airspace against incoming attacks from Russian forces.

“Many countries have Patriot, many countries have other systems, there’s a whole series of Israeli systems that are quite capable, the Germans have systems as we mentioned, so a lot of the countries that were here today have a wide variety of systems,” Milley said.

“The task will be to bring those together, get them deployed, get them trained, because each of these systems is different, make sure they can link together with a command and control and communication systems and make sure they have radars that can talk to each other so they can acquire targets on the inbound flights.”

The air defenses Ukraine needs to combat kamikaze drones are different from the systems that are used against cruise missiles and similar weapons. The Patriot air defense missile system – which stands for “Phased Array Tracking Radar to Intercept of Target” – is designed to counter and destroy incoming short-range ballistic missiles, as well as advanced aircraft and cruise missiles, and could be used against drones.

Ukrainian officials said that Ukrainian air defense forces were already taking down the “bulk” of the Shahed drones. Ukraine’s senior military commander, Gen. Valerii Zaluzhnyi, tweeted Tuesday his thanks to Poland as “brothers in arms” for training an air defense battalion that he said had destroyed nine of 11 Shaheds. He said Poland had given Ukraine “systems” to help destroy the drones.

Last month there were reports that the Polish government had bought advanced Israeli equipment (Israel has a policy of not selling “advanced defensive technology” to Kyiv) and was then transferring it to Ukraine.

Zelensky made another plea for more air defense capacities on Thursday, saying Kyiv has only about 10% of what it needs to combat Moscow’s attacks.

The Ukrainian military has been using RAM II kamikaze drones, which were developed by a consortium of Ukrainian companies and bought with money crowdfunded by ordinary Ukrainians. These precision-guided loitering munitions can carry 3 kilogram (6.6 pound) warheads and have a flight range of up to 30 kilometers (18.6 miles), according to the manufacturers.

But Kyiv has also been relying on its allies for drone supplies. The US has sent several types of aerial weapon systems to Ukraine. These include Switchblade drones – small, portable kamikaze drones that can carry a warhead and detonate on impact. The Switchblade 300 and the larger Switchblade 600 are produced by American defense company AeroVironment.

The smaller Switchblade 300 can hit a target up to 6 miles away (9.6 kilometers), according to specifications provided by the company, while the larger Switchblade 600 can strike more than 20 miles (32 kilometers) away. Both systems can be set up and launched within minutes.

In May, the US sent the Ukrainian military “phoenix ghost” drones, which are believed to be similar to Switchblade, although little is known about their capabilities.

Ukraine has also been using Turkish-made Bayraktar TB2 drones. These have become something of a symbol of the Ukrainian resistance. However, these are larger and designed to return home after dropping laser-guided bombs or missiles.