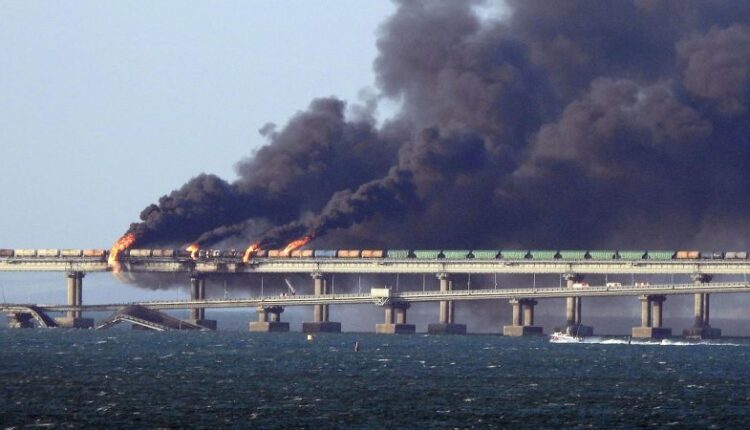 A huge blast early Saturday has severely damaged the only bridge connecting annexed Crimea to the Russian mainland, causing parts of it to collapse.

The attack, which has disrupted major transport links between mainland Russia and the annexed peninsula, not only strikes a blow against Russia’s military effort in Ukraine, but is also a psychological blow to Moscow and a major propaganda victory for Kyiv.

The exact cause of the explosion remains unclear. Russian officials said a fuel truck exploded, but two spans of the road crossing in the direction of Crimea appear to have collapsed. A subsequent fire engulfed a train of fuel trucks on a separate part of the bridge.

Images of the Kerch bridge posted on social media appear to show a portion of the roadway of the vehicle and rail bridge had fallen into the waters below it. Flames could be seen burning from rail cars above.

Russia began constructing the enormous 19-kilometer (about 12-mile) bridge over the Kerch Strait, spending an estimated $3.7 billion, after Moscow illegally annexed Ukraine’s Crimean Peninsula in 2014. It was the physical expression of Russian President Vladimir Putin’s objective to take over Ukraine and bind it to Russia forever. The day it opened, he led a triumphant convoy over the bridge, driving a truck festooned with flags.

The bridge spans the Kerch Strait, which connects the Black Sea to the Sea of Azov, on which sit key Ukrainian ports, including Mariupol. For Russia, the bridge symbolizes the physical “reunification” of Crimea with the Russian mainland. The bridge carries much of Crimea’s needs – such as fuel and goods – and has been used regularly to supply weapons and fuel to Russian forces.

Ukrainian officials started responding to the fire without directly acknowledging that Ukraine was responsible for the explosion, with many of the responses triumphant.

The attack took place the day after Russian President Vladimir Putin turned 70, and Ukraine’s Secretary of the National Security and Defense Council Oleksiy Danilov published video of the bridge in flames, with a huge section of the roadway collapsing into the water, alongside a parallel video of Marilyn Monroe singing “Happy Birthday, Mister President.” Others online compared the bridge attack to Ukraine’s April sinking of the Russian Navy’s warship the Moskva.

In a brief post on its official Twitter account, the Ukrainian Ministry of Defense reacted to the explosion, saying: “The guided missile cruiser Moskva and the Kerch Bridge – two notorious symbols of Russian power in Ukrainian Crimea – have gone down. What’s next in line, Russkies?”

Among the responses, the Navy of the Armed Forces of Ukraine posted on Facebook, “Air defense of the Russian Federation, are you sleeping?” alongside a video showing a section of the bridge’s road that had been completely destroyed.

Putin’s government scrambled to insist that the damage was under control and would be repaired quickly. The state news agency TASS avoided the word “attack,” reporting that a team of 380 responders, along with 90 pieces of equipment, was dispatched to “eliminate the consequences of the emergency” on the bridge. The Russian Transport Ministry said the railway section of the bridge, vital for bring troops and equipment for the war effort, would be restored by Saturday evening.

Putin immediately ordered a “government commission” to examine the Kerch Bridge “emergency” in Crimea, Russian state media TASS reported, adding that the heads of Russia’s Ministry of Emergency Situations and the Ministry of Transport are now at the scene of the incident.

Russian officials suggest that the explosion was caused by a truck blowing up on the road bridge.

The spokeswoman for the Russian Investigative committee, Svetlana Petrenko, said the committee “has opened a criminal case about the incident at the Crimean Bridge. According to preliminary information, this morning a truck was blown up on the automobile part of the Crimean Bridge from the Taman Peninsula [the westbound lanes of the bridge], which led to the ignition of seven fuel tanks of a train travelling toward the Crimean Peninsula.”

“As a result, two car lanes of the bridge partially collapsed.”

The committee also expanded on its earlier statement that a truck on the bridge had blown up.

According to Russia’s Investigative Committee, the owner of the truck is resident of the Krasnodar Krai, and investigative actions have been launched at his place of residence. The route of movement of the vehicle and the relevant documentation are being studied, the committee added.

CNN is unable to verify the Russian explanation for the explosion.

Major transport links between mainland Russia and the annexed peninsula of Crimea – including buses and trains – were suspended.

Meanwhile, weather conditions in the Kerch Strait are hindering Russia’s plans to use ferries to reach Crimea from Krasnodar, according to Russian state media, and Russian troops in southern Ukraine will now be resupplied by sea and land corridor, the country’s Ministry of Defense said.

Car traffic on the undamaged part of the Crimean bridge resumed, said the Russian appointed head of Crimea, Sergey Aksenov, in a statement on his Telegram channel on Saturday.

“At the moment, traffic is open to cars and buses with a full inspection procedure. We ask truck drivers to plan their route using the Kerch ferry crossing. The Kerch-2 ferry will begin to sail across the strait in two hours,” said Aksenov.

Social media video reviewed by CNN indicates that the westbound lanes on the road bridge were severed, but that the eastbound lanes appear to be intact.

According to Aksenov, railway communications on the Crimean bridge were set to be renewed by the end of Saturday.

The Russian military has used the bridge extensively to resupply its forces in Kherson and Zaporizhzhia, and it’s unclear how the explosion will affect its supply chains. Kyiv is successfully pushing ahead in its campaign to retake parts of southern and eastern Ukraine that Russia captured in the initial weeks of the war.

The Ukrainian military has recaptured 2,400 square kilometers of territory in Kherson region in the south of the country “since the beginning of the full-scale war,” a senior Ukrainian official said Friday.