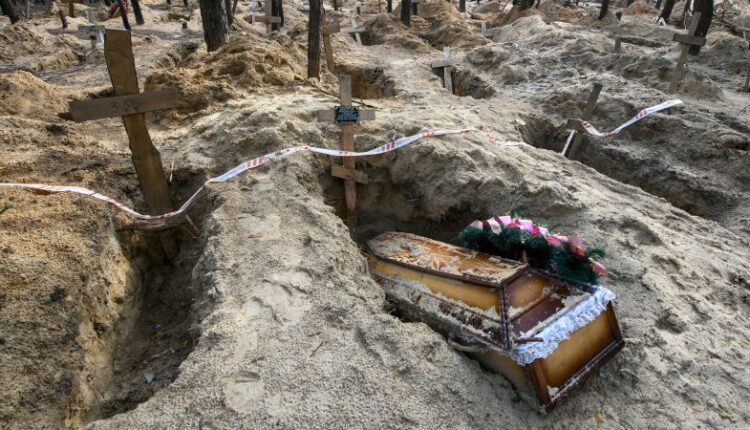 The bodies of more than 500 civilians have been discovered in territory in northeast Ukraine recently retaken from Russian forces, Ukrainian police say.

And as Ukrainian forces liberate more land in the northeast, new burial sites are being discovered in Donetsk. Many appear to contain the remains of civilians who lost their lives during several months of shelling and rocket fire.

“We found the bodies of 534 civilians from the de-occupied territories” in Kharkiv region alone, said Serhii Bolnivov, head of the investigative department of the regional police.

Most of those recovered – 447 – were found at what he described as a “mass burial site” in the town of Izium, which Ukrainian forces liberated from Russian occupation in early September. Russian troops had been using Izium as a launchpad for attacks southward into the Donetsk region.

Bolvinov also alleged that more than twenty suspected Russian “torture chambers” have been found in the region.

“In almost all large cities and towns, where military units of the Russian army were based, they set up such places of detention of civilians and prisoners of war and tortured them,” he said, mentioning one in the town of Pisky-Radkivski.

“This is the 22nd torture chamber which we have found and inspected in the de-occupied territory of the Kharkiv region,” said Bolvinov.

He said the most common torture techniques were electric shocks and severe beatings with sticks and other objects. There were also cases of nails being pulled out and the use of gas masks to restrict breathing.

Bolvinov said there were also criminal proceedings underway regarding allegations of rape.

“We understand that it is very difficult for victims to testify about such facts. However, there are proceedings that we have registered, there are appeals from women who were raped. We have information about the alleged facts of rapes in torture chambers,” Bolvinov added.

The Ukrainian investigations in Kharkiv follow the discovery of grave human rights abuses by Russian forces north of Kyiv in March.

Russia was accused of a litany of war crimes during its unsuccessful campaign to capture Kyiv in the early months of the war. After retreating from Bucha, a suburb of the Ukrainian capital, reports of emerged of Russian forces carrying out summary executions indiscriminate shelling. Bodies were found shot, tied up and left to rot, some bearing signs of torture. In nearby Borodianka, dead civilians were found strewn along the streets. Homes were reportedly ransacked.

Moscow has consistently denied its soldiers are responsible for war crimes. In Bucha, the Kremlin claimed – without evidence – that the atrocities there were staged. However, witnesses who spoke to CNN said the carnage in the town began after its occupation.

A report published in July by the Organization for Security and Cooperation in Europe found that found that the patterns of violent acts by Russian forces in Ukraine meet the qualification of crimes against humanity.

France tells citizens to leave Iran ‘as soon as possible’