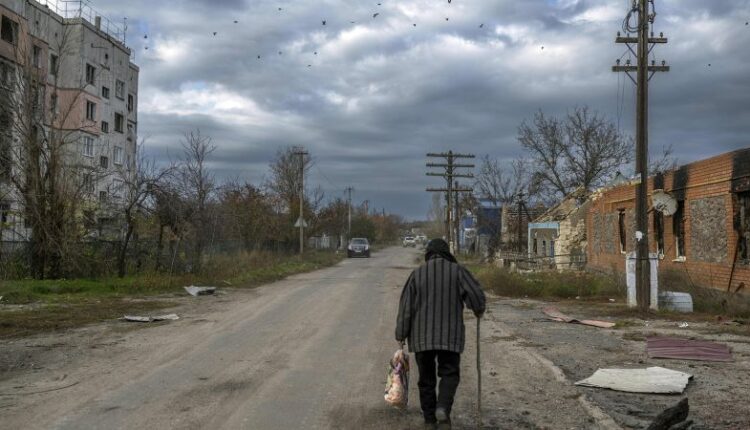 Russia has ordered a retreat from the key southern city of Kherson, the only regional capital it has captured since February’s invasion, in a dramatic strategic setback for Russian President Vladimir Putin.

In the face of Ukrainian advances in the region, Russian troops across the Kherson region will withdraw from the west bank of the Dnipro River, an area that includes Kherson city, Russian state media reported Wednesday.

The order came at a meeting in Moscow between Defense Minister Sergei Shoigu and the commander of Russian forces in Ukraine, Gen. Sergei Surovikin, as Ukrainian forces approach the city from two directions.

The Russian withdrawal would represent the most significant military moment in the war since Ukrainian forces swept through the northern Kharkiv region in September.

Ukrainian officials have however remained skeptical that Russian forces had left the west bank altogether.

“Actions speak louder than words. We see no signs that Russia is leaving Kherson without a fight,” Mykhailo Podolyak, an adviser in the Office of the President, tweeted.

Defending occupied territory on the west bank of Kherson had become increasingly difficult for the Russians as Ukrainian forces disabled bridges across the Dnipro and attacked Russian supply lines.

Kherson was one of four Ukrainian regions illegally annexed by Russia in September. Once the withdrawal is complete, several thousand square kilometers of that annexed territory will have been surrendered.

The withdrawal “demonstrates the courage, the determination, the commitment of Ukrainian armed forces and also the importance of the continued support” of the West, NATO Secretary General Stoltenberg told CNN’s Christiane Amanpour on Wednesday.

According to the Russian Defense Ministry, Surovikin said that “Kherson [city] and adjacent settlements in the current conditions cannot be fully supplied and function.”

Surovikin claimed that Ukrainian forces “are attacking schools, hospitals and civilians in Kherson, who are being evacuated to the other side of the Dnipro river.”

Surovikin, who had warned that difficult choices would be required when he was appointed overall commander of the operation, said: “The Armed Forces of the Russian Federation successfully resisted the attempts of the offensive of the Armed Forces of Ukraine in the direction of Kherson.”

He claimed that “from August to October, the Armed Forces of Ukraine lost more than 9,500 people in Kherson,” a number he said was seven to eight times more than Russian losses. It is impossible to verify Surovikin’s claim.

Meanwhile, Russian reporters in Kherson’s north have described withdrawals from some areas.

A prominent Russian Telegram channel, with more than one million subscribers, reported “there was a withdrawal to back up positions,” near the town of Snihurivka, on the west bank, which is in neighboring Mykolaiv region.

“A bridge was also blown up by our forces in this area today,” the channel, RVVoenkor, reported.

It added: “Ukrainian sources published a photo with the raising of their flag at the Snihurivka railway station. The settlement is under their control.”

CNN has geolocated the photograph of the flag on a tower in Snihurivka.

The channel also said that the Ukrainians had entered a nearby village (Kalynivske) and that “the front line is steadily moving towards Kherson.”

Another Russian military reporter, Alexander Kots, said on Telegram that after “receiving several urgent recommendations to cross to the east bank” from Kherson city, he decided to take two Russian flags on the departing ferry “so that those who would mock our state symbols would not get them.”

Kots added: “One was taken from the flagpole at the City Council…..I’ll keep the state flag until we come back. So I can hang it up again.”