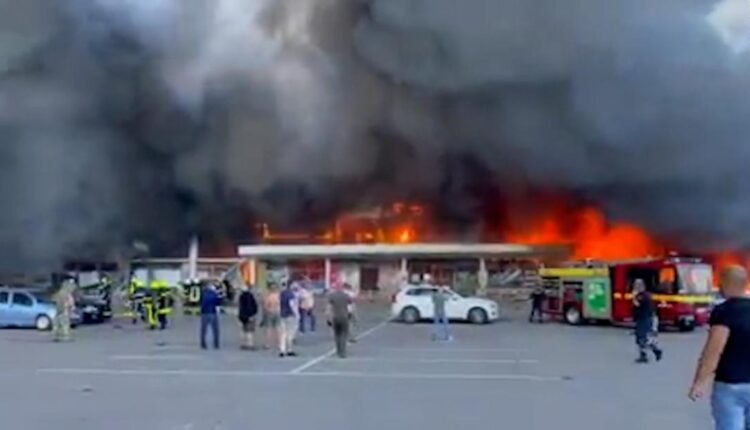 At least 18 people were killed, Dmytro Lunin, the head of the Poltava region military administration, said on Tuesday. He had earlier said the death toll could rise.

“Another 36 people are missing,” he said, adding that more than 1,000 people — including rescuers, police, medics and volunteers — worked through the night. “We continue the search.”

Ukrainian President Volodymyr Zelensky said after the strike that up to 1,000 people were in the mall before the air raid was announced.

At least 58 people were injured, according to Ukraine’s State Emergency Services, while Lunin said 25 people were admitted to intensive care at the hospital in Kremenchuk.

Video from the scene showed heavy smoke billowing from the building, which was engulfed by fire. The mall measures about one hectare — roughly the size of two football fields — and the strike occurred around 4 p.m. local time, according to Volodymyr Solohub, a regional official in the Poltava Oblast local administration.

“We don’t know how many more people might be under the rubble,” Solohub said.

Zelensky called the strike “one of the most defiant terrorist attacks in European history,” in his evening video address.

“A peaceful city, an ordinary shopping mall with women inside, children, ordinary civilians inside,” he said.

“Only totally insane terrorists, who should have no place on earth, can strike missiles at such an object. And this is not an off-target missile strike, this is a calculated Russian strike — exactly at this shopping mall.”

The attack targeted a site in central Ukraine far away from the epicenter of Russia’s war, which has recently been focused in the east of the country. Ukrainian officials said the attack was conducted by a Russian KH-22 missile, which is capable of carrying an explosive warhead of up to 1 ton (2,240 pounds).

It came as G7 leaders met at a summit in Germany that was mostly geared toward coordinating the Western response to Russia’s invasion.

British Prime Minister Boris Johnson said from that meeting that the attack showed the “depths of cruelty and barbarism” of Russian President Vladimir Putin, the UK’s PA news agency reported.

“This appalling attack has shown once again the depths of cruelty and barbarism to which the Russian leader will sink,” Johnson said, according to PA.

In a tweet Monday, US President Joe Biden condemned the attack, saying, “Russia’s attack on civilians at a shopping mall is cruel. We stand in solidarity with the Ukrainian people.”

“As demonstrated at the G7 Summit, the U.S. along with our allies and partners will continue to hold Russia accountable for such atrocities and support Ukraine’s defense,” Biden added.

French President Emmanuel Macron called the attack an “abomination,” in a tweet that included video of the burning shopping mall. “The Russian people have to see the truth,” he said.

And Ukraine’s Foreign Minister, Dmitro Kuleba, said on Twitter: “Russia is a disgrace to humanity and it must face consequences. The response should be more heavy arms for Ukraine, more sanctions on Russia, and more businesses leaving Russia.”

Those issues were on the table at the summit in Germany. The G7 vowed to continue providing support for Ukraine “for as long as it takes” in a joint statement, and European Commission President Ursula von der Leyen told CNN on Monday that she would not “bet on Russia” winning the war.

The US plans to announce as early as this week that it has bought an advanced, medium-to-long-range surface-to-air missile defense system for Ukraine, a source familiar with the announcement told CNN.

However despite the outward confidence of Western leaders, Russia has seen military successes in eastern Ukraine in recent days.

Russian forces captured the city of Severodonetsk after weeks of fighting and have also picked up territory south of Lysychansk.

They have eliminated most Ukrainian defenses in the Luhansk region and consolidated control of a belt of territory in the south, bringing strategic benefits and blunting the effectiveness of Ukrainian counterattacks.

Russian forces have also stepped up attacks in the Donetsk region, getting slightly closer to the belt of industrial towns in the region that runs south from Sloviansk through Kramatorsk to Kostiantynivka.

“Zelensky was very much focused on trying to ensure that Ukraine is in as advantageous a position on the battlefield as possible in the next months as opposed to the next years, because he believes that a grinding conflict is not in the interest of the Ukrainian people,” US national security adviser Jake Sullivan said after the Ukrainian President met virtually with leaders at the G7.

Earlier, a source familiar with the matter told CNN that Zelensky told leaders he wanted the war to be over by the end of the year, before winter sets in.

Indonesian who caught 14-foot crocodile with rope: ‘I had to take a chance’