Kyiv: Defiance, patriotism and cool heads on show on the streets of Ukraine’s capital 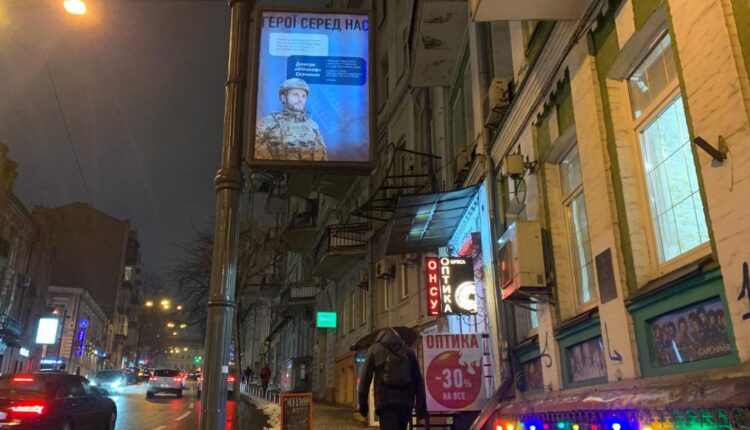 A total of 4,480 faces stare into the frigid air — the photographs of the servicemen and women who have died on the frontlines of a conflict of mud, trenches and abandoned villages that could have been conjured from 1917.

People gaze solemnly at those faces — the sons and daughters stolen away — as traffic churns through the winter slush. Snow piles up against the walls, and the golden domes of the monastery glint in a pale winter sun.

About 15,000 people have lost their lives in Europe’s only active conflict, which began when Russian forces occupied Crimea and pro-Russian separatists seized a swathe of eastern Ukraine in 2014.

The streets of Kyiv don’t feel like those of a city readying for war. Shops and businesses are open as usual, the railway station is not full of anxious mothers with hastily packed suitcases. The casinos and bars are thriving.

But beneath the surface, there is a quiet defiance bordering on fatalism. As President Volodomyr Zelensky never tires of saying: We have lived with the Russian threat for eight years already. There is no reason to panic.

Zelensky’s phlegmatic approach is echoed on the streets. Yuri, a 42 year-old policeman, clad in a traditional “shapka” and clutching a briefcase on his way home from work, says he isn’t scared in the slightest.

“I see all the soldiers. I’m not scared, and I am ready to defend — in fact, not just me, everyone is ready to defend and protect their country.” He adds as he walks away, shrugging his shoulders, “but anything can happen at the moment.”

At dusk, an orange hue from the street lights bathes the center of Kyiv. We meet Darina Yakovenko, 19, wrapped in a fluff with a warm scarf covering her blond hair. She is studying physics at Savchenko National University.

By coincidence, we are standing just off “European Square.”

I asked her what route she would rather Ukraine takes, one that is westward looking, towards the EU and potentially NATO, or one that returned it to the orbit of Russia.

Darina is softly spoken and shy, but her views are forthright. “We are still dragging the weight of the Soviet Union that we left behind, and we want to get rid of it. I want our independence. This is a country of great potential.”

Darina relates the stories her grandmother told her about the 2014 invasion. Stories of shootings, bombings and being forced to flee the eastern city of Donetsk, now held by the rebels.

She admits the situation is scary. Yet that flicker of anger flares again.

“If the fighting starts, I will even join the army because this is my country, these are my people.”

Ukrainians are much changed since 2014, especially the younger generation. Visa-free travel to the European Union has opened up new horizons. At Kyiv Borispil airport, backpackers set off for Paris and the Costa del Sol. Social media is vibrant; debate lively. The idea of a suffocating, intolerant state is anathema.

And it’s not just the young in Kyiv who are ready, in the face of overwhelming odds, to take on the Russians.

In an underground crossing underneath Maidan Square, the site of the huge protests that ousted the pro-Russian government in 2014, Tatiana runs a souvenir shop selling weird and wonderful Ukrainian souvenirs: samovars, fridge magnets and traditional Ukrainian dresses called vyshyvanka.

Tatiana is in her mid-40s. Asked if she is ready for war, she says: “I’m ready to fight. I’ve got my suitcase, my money and I’ll join a militia if I have to. I trust our president and our army — they will defend us.”

There is certainly no sense of panic here, people are not fazed by the drums of war and the social media videos showing Russian tanks being transported towards Ukraine’s borders.

Irina, a senior citizen, is hurrying to a social event. As she passes, she says: “This is all a show. And I don’t want to be part of any show. The only show I want to see is the concert I am going to be late for — so that should tell you what you need to know!”

The sentiment is echoed by Aleksandr, 55. He is supping an early evening beer outside of a typical shop found across much of the former Soviet Union, neon lights announcing its opening hours: 24/7. “Of course it can happen, but I’m not scared… what is there to be scared of?”

When asked what would happen to him in a war, he replies with a smile, “Better to drink beer now because if there is a war, we won’t be drinking many then,” and takes another swig.

It’s possible that eight years of war has desensitized people. Perhaps there is genuine belief in Kyiv that Putin is bluffing and doesn’t want the risk of a hot war or the punishment that might follow it. Perhaps people do think that the Ukrainian army, a shambles in 2014, can now put up a real fight given billions of dollars of investment. But they are under no illusions that NATO will ride to their rescue if the balloon goes up.

As the sun drops and air bites with cold, the road up away from the Maidan freezes and is treacherous.

A poster of a Ukrainian soldier flutters above the pavement. It reads “Heroes Among Us.”

The sentiment seems a fitting reflection of the mindset here: Putin won’t find it easy to bring part or all of Ukraine back within Moscow’s umbrella.

North Korea’s Kim Jong Un wants the world to know he still matters. Seven missile tests in a month may prove it