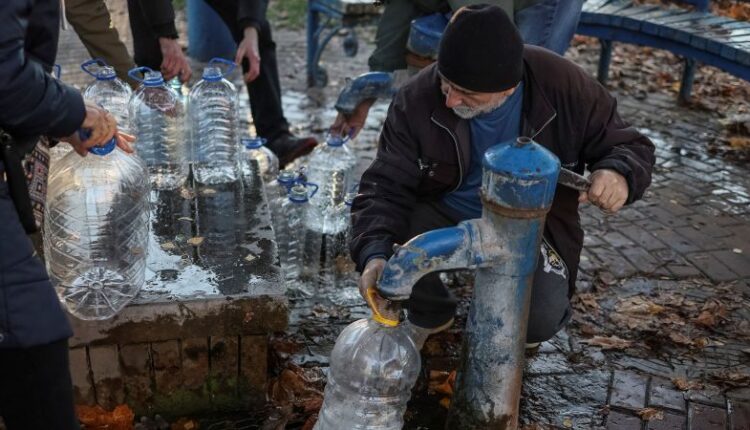 Once the smoke from Russia’s latest rocket strikes had cleared and the sound of air raid sirens stopped, many of Kyiv’s residents emerged, empty bottles in hand, to queue for water.

But blackouts continue to plunge the city into darkness, leaving families and businesses struggling without lights or running water.

Monday “was a difficult day for everyone,” Natalia, a 60-year-old cashier at a shop selling purified water, told CNN, after the latest barrage of Russian airstrikes hit key infrastructure and wrought havoc on the city’s power supplies.

A back-up generator provided by the owner kept her store running for four hours as locals lined up outside, until electricity returned in the evening. But on Tuesday, the lights went out again.

“I can’t fill the big bottles with water … because the pump doesn’t work,” Natalia said. “If someone comes with a small bottle for three liters, or if a mother with a child comes, then I will fill their bottles with water, even if it takes some time.” CNN is not using her and other interviewees’ last names at their own request.

Around 80% of residents were left without running water on Monday – with many losing electricity, too – following power outages caused by Russian strikes, the capital’s mayor, Vitali Klitschko, said on Telegram.

One of the strikes hit an energy facility that powered 350,000 apartments in the capital, Klitschko said, adding that emergency services were attempting to restore power and “stabilize the situation as soon as possible.”

But as temperatures drop across Ukraine, Russia’s recurrent bombardments are making life more difficult for the millions of people who still live in and around Kyiv – and raising fears about an arduous winter ahead.

Monday’s attacks marked yet another reminder that Kyiv is firmly back in the grips of Russia’s war on Ukraine.

Several months of ground combat had pulled the theater of conflict towards Ukraine’s east, allowing a semblance of normality to settle in Kyiv during the summer months. But that changed on the morning of October 10, when Moscow launched the first of a fresh wave of missile and rocket strikes on the city and several others across Ukraine.

For many citizens, it dawned quickly that a difficult winter was coming. “Lately there’s been more people,” Natalia told CNN. “On October 10 we had a huge queue here. In a day we sold what we usually sell in a week.”

“The situation now is very unstable, so people want to have some stocks,” she said. Members of Ukraine’s armed forces are among her customers. “They usually come once or twice a month. We give them a discount and they take a lot.”

“We didn’t have electricity or water or even heating,” she told CNN. “We are using candles and torch lights in the evening, in case the electricity is off,” she said, adding that she refrains from using large appliances to help ease pressure on the city’s grid.

A generator at her school has helped lessons continue as normal, at least some of the time. “It does not always work, (and) then we sit without the lights and continue teaching with no lights. Teachers can still teach kids using the books, blackboards – old-school, so to say.”

Her students recognize Ukraine’s new reality. “They make the drawings for soldiers, they weave camouflage nets,” she said. “In case of air raid (sirens) we go to the shelters and they treat this with understanding; they are not scared anymore.”

For Natalia and Olha, as for so many across Kyiv, the impact of Russia’s air strikes does not end when they leave work.

“We also experience power outages at home,” Natalia said. “I can’t cook or reheat food. And it’s cold now, (so) I’d rather eat some hot meal or drink tea.”

The temperature in the capital has not dropped to the depths felt in the winter – “it’s alright for now, we can handle this,” Natalia says – but from November to March, the mercury often drops below freezing.

Authorities in Kyiv are attempting to prepare, readying about 1,000 “heating points” in schools, kindergartens and other sites across the city in case of an emergency, Klitschko said Tuesday.

“We are considering various scenarios of how events may develop. The worst scenario is when there will be no electricity, water and heat supply at all,” the mayor said on the TV channel “Kyiv,” according to a statement by the City Council.

Viktoria, a 48-year-old manager at a lamp shop, says people have started asking to buy battery-powered light sources to combat blackouts – though her store has none to offer.

“Since the start of these massive attacks on critical infrastructure we’ve had the power cuts daily, sometimes even twice a day. It’s usually up to 4 hours,” she told CNN.

The pace of the ground war may slow down as frost covers eastern Ukraine’s landscape in the coming months, military analysts predict, but attacks on Ukraine’s power grid means the impact of war will rage on in living rooms and workspaces across the country.

“Barbarians are attacking our energy,” Ukrainian President Volodymyr Zelensky said last week, after another day of strikes. “But I am sure we will go through this darkness courageously, and with dignity.”

Zelensky has led efforts to secure international assistance as his country steels itself for a cold and painful winter. On Tuesday, he met the European Commission’s top energy official in Kyiv to discuss plans to shore up the nation’s resources.

He spoke in detail about Ukraine’s needs for the restoration of energy infrastructure and called on the European Commission to play a coordinating role in attracting assistance from EU member states, according to a statement from his office.

French President Emmanuel Macron meanwhile told Zelensky that Paris would help Ukraine get through the winter, according to a readout of the call released by the Elysée Palace.

On Kyiv’s streets, residents are united in expecting a difficult new phase of the conflict as winter takes hold. But many are prepared, and remain focused on one outcome.

“We are used to this now. This is a necessity. What matters is our victory,” Viktoria said.

That defiance is widely shared across Kyiv.

“I’m not negative about this situation,” said Olha as she queued for water. “If this is really required, we will adhere.”

“We’ve been experiencing daily electricity cuts for four to five hours for quite some time now,” added Arzu, a 25-year-old cashier at a post office. “We have already learned to adjust to it. We keep working.”