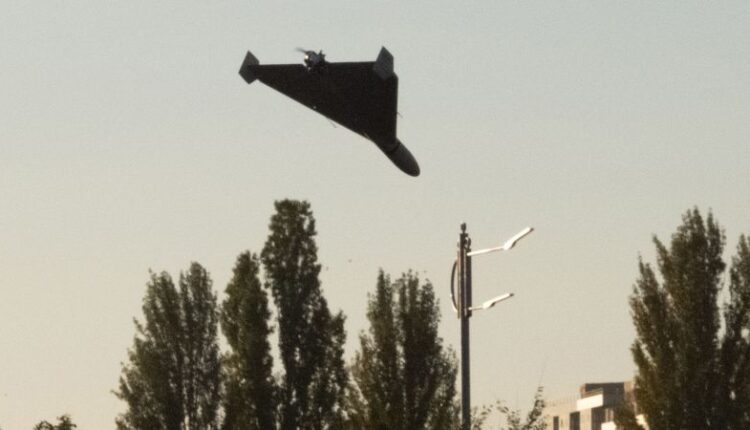 Ukrainian officials said at least four people were killed when Russia launched a barrage of Iranian-made “kamikaze” drone attacks in Kyiv on Monday, setting off warning sirens across the capital.

Four people were injured in the attacks and 19 people trapped under the destruction have been rescued, according to Kyrylo Tymoshenko, a senior official working for Ukraine’s president.

The strikes on Kyiv appear to be part of a wider assault involving drones and cruise missiles aimed at critical infrastructure, especially power sources.

The Ukrainian Air Force said it had destroyed 37 Iranian-made kamikaze drones and three cruise missiles in the south and east of the country early Monday. Ukraine Interior Minister Denys Monastyrskyi said that security forces were able to shoot down 36 of 42 drones that Russia launched on Monday. Around 30 of the drones targeted Kyiv, Monastyrskyi said on Ukrainian television.

Fresh attacks in the eastern regions of Dnipropetrovsk and Sumy targeted crucial infrastructure. Three people in Sumy were killed by rockets, nine were wounded and 1,625 were left without power, a local military official said.

Energy infrastructure was damaged in central and northern regions of Ukraine, but the power grid was “under control,” the state energy utility Ukrenergo said in a statement on Facebook. Ukrainian Prime Minister Denys Shmyhal asked citizens to reduce power consumption, especially during peak hours, to help stabilize the country’s electricity system.

In Kyiv, blasts were heard as early as 6:45 a.m. local time, including one in the city’s Shevchenkivskyi district. Kyiv was hit five times, Shmyhal said. One of the strikes hit close to Kyiv’s main train station, Anton Gerashchenko, an adviser to Ukraine’s minister of internal affairs. Authorities have asked people to stay indoors.

“Air defense system is working above our city so I strongly recommend everyone to stay in shelters,” Volodymyr Borysenko, the mayor of Boryspil, which is on the outskirts of city, said on Facebook.

“Kamikaze drones and missiles are attacking all of Ukraine,” Ukraine President Volodymyr Zelensky said. “The enemy can attack our cities, but it won’t be able to break us. The occupiers will get only fair punishment and condemnation of future generations. And we will get victory.”

Kamikaze drones, or suicide drones, are small, portable aerial weapon systems that are hard to detect and can be fired at a distance. They can be easily launched and are designed to hit behind enemy lines and be destroyed in the attack.

One of the people killed in the capital was a woman who was six months pregnant, Kyiv Mayor Vitali Klitschko said in a statement.

Klitschko also told CNN’s Clarissa Ward that Russian forces were targeting infrastructure to “switch off the electricity” ahead of the winter months.

Vitalii, a Kyiv man in his 20s, witnessed one attack after he had just arrived at a railway station.

“We saw a flash and an explosion. We went to the basement,” said Vitalii, who declined to give last name for safety reasons.

Vitalii and others sought shelter for about two hours. When the coast appeared clear, they attempted to leave – only to see another blast. Vitalii said he and others recognized the triangular shape of the Iranian-made drone and how it buzzed.

“There was another explosion,” he said. “Everyone went back to the basement. People were running, screaming. There was panic. People were scared because they didn’t understand what was going on.”

Once the situation eventually calmed after the second blast, Vitali took a taxi and left.

On Friday, Russian President Vladimir Putin said there was no need for more “massive” strikes for now. However, a series of Russian attacks over the weekend killed 11 civilians – eight in the eastern region of Donetsk, two in the southern Zaporizhzhia region and one in the northeastern region of Kharkiv.

The city of Zaporizhzhia was attacked with kamikaze drones and missiles on Saturday, while Kyiv was hit by an apparent Russian rocket.

Brooks Koepka: ‘I didn’t know if my career was over,’ says US golfer as he reflects on horror injury after bumper LIV Golf win