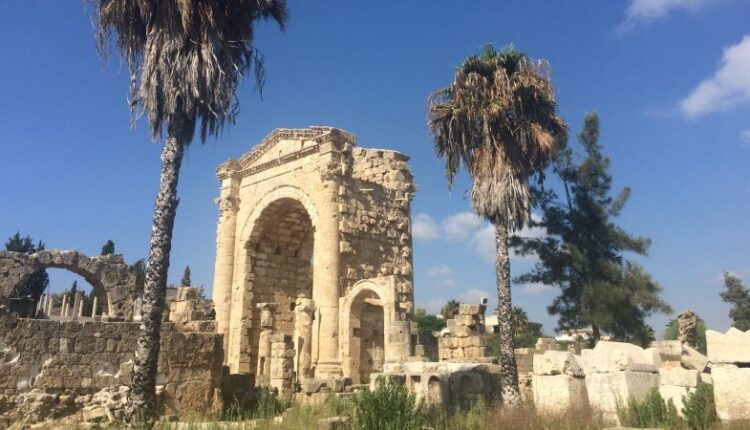 Here is a look at Lebanon, a Middle Eastern country bordering Syria, Israel and the Mediterranean Sea.

1918 – After the collapse of the Ottoman Empire, France gains control of the area that comprises modern-day Lebanon.

1948-1975 – A large number of Palestinian refugees settle in Lebanon after the creation of Israel in May 1948. The frequent clashes between Israeli forces and Palestinian fighters unsettle the country. Also at times, the Lebanese army fights battles against the Palestinians, causing further unrest.

1976 – At the invitation of the Lebanese government, Syria sends troops, called the Arab Deterrent Force, to help end the civil war.

March 1978 – Israel invades Lebanon and occupies an area in the south. After protest from the United Nations, Israel withdraws, but creates a “security zone” in the south of the country, administered by the Army of South Lebanon.

August 1982 – Bashir Gemayel is elected president. However, he is assassinated on September 14. His brother, Amin Gemayel, replaces him as president on September 23.

September 15-18, 1982 – Hundreds of Palestinian refugees are killed in a refugee camp in Beirut. The murders are committed by Lebanese militia members but Israel is accused of complicity.

October 23, 1983 – The French and US headquarters of a multinational peacekeeping force is bombed, killing 241 Americans and approximately 40 French soldiers.

February 1984 – The Lebanese Army nearly collapses due to defections of Muslim and Druze soldiers.

1988 – Gemayel steps down as president, although he has no successor. He appoints General Michel Aoun, a Christian, interim prime minister. However, the current prime minister Salim al-Hoss, a Muslim, doesn’t leave office. The government then becomes divided into Christian and Muslim factions.

1989 – Parliament meets in Saudi Arabia and creates the Taif agreement to end the civil war.

November 1989 – René Moawad is elected president. Aoun rejects the election of Moawad and the Taif agreement. Moawad is assassinated in November and replaced by Elias Hrawi, who names Hoss prime minister and fires Aoun as army commander.

1991 – All militias, with the exception of Hezbollah, are disbanded.

1991 – Lebanon participates in the Madrid peace talks between Israel and its Arab neighbors.

May 2000 – Israel withdraws its forces from the south.

February 14, 2005 – Former Prime Minister Rafik Hariri and 21 others are killed by a car bomb in Beirut.

November 21, 2006 – Minister of Industry Pierre Gemayel, son of former President Amin Gemayel, is shot and killed while driving through Beirut.

June 13, 2007 – Anti-Syrian lawmaker Walid Eido, along with nine other people, is killed in an explosion. Eido was a vocal supporter of a UN investigation into Hariri’s assassination and was a member of a political bloc led by Hariri’s son, Saad Hariri.

November 24, 2007 – Before leaving office, Lahoud declares a state of emergency and hands security over to the military. The vacancy left by Lahoud will be filled by Prime Minister Fouad Siniora until a new president can be elected.

May 6, 2008 – The government announces plans to shut down Hezbollah’s private telecommunications network, calling it a threat to state security.

May 8, 2008 – The leader of Hezbollah, Hassan Nasrallah, says the plan to shut down his group’s telecommunications system amounts to “a declaration of open war.” Gun battles erupt in the streets of Beirut between Hezbollah supporters and government forces.

May 25, 2008 – Army General Michel Sleiman is elected as the new president by parliament.

November 9, 2009 – After five months of deliberations, Hariri announces the formation of a cabinet, comprised of members of Hariri’s party and members of Hezbollah.

January 17, 2011 – The UN-backed Special Tribunal for Lebanon hands down indictments in the 2005 assassination of Rafik Hariri. The details of the indictments are being kept secret by the International Court of Justice in the Netherlands in order not to provoke violence in the country.

June 13, 2011 – Mikati announces the formation of a new government.

July 8, 2011 – Judge Daniel Fransen with the Special Tribunal issues arrest warrants for suspects in the assassination of Rafik Hariri.

November 29-30, 2011 – Rockets are fired from Lebanon into Israel for the first time in more than two years. Israel retaliates with artillery fire into Lebanon. No injuries are claimed on either side.

December 9-11, 2011 – A roadside bomb hits a UN vehicle in Lebanon wounding five French peacekeepers and a Lebanese civilian. Two days later, a rocket is fired from Lebanon aimed at Israel. The rocket falls short and wounds a Lebanese woman.

October 19, 2012 – Brigadier General Wissam al-Hassan and two others are killed in a car bomb explosion in Beirut. Hassan was the chief of the Internal Security Forces Information Branch and opposed the Syrian government of Bashar al-Assad.

March 22, 2013 – Mikati announces the resignation of his government after disputes over parliamentary elections.

February 15, 2014 – A new government is announced with Salam as the prime minister.

August 22-23, 2015 – Long-simmering weariness over government dysfunction reaches a boiling point when violent clashes erupt because of garbage going uncollected in Beirut. A spokesman for the Lebanese Security Forces says Lebanese army units were deployed. Red Cross Lebanon says about 400 people were injured in the chaos.

November 12, 2015 – Two suicide bombings in southern Beirut kill at least 43 people. A would-be suicide bomber who survived the attack tells investigators he is an ISIS recruit. He says he and three other attackers came from Syria two days earlier, according to a Lebanese security source.

June 27, 2016 – Six people are killed and 19 others are wounded in a series of suicide attacks in a mainly Christian area of northern Lebanon, close to the border with Syria.

August 16, 2017 – Parliament votes to repeal a clause that lets rapists avoid punishment if they marry their victims, according to the country’s official news agency. This follows moves by Jordan and Tunisia, which annulled their “marry-the-rapist” laws within the last month.

August 27, 2017 – Lebanon’s army and Hezbollah suspend their fight against ISIS, according to official announcements made on social media. This is the first such deal ISIS has made with an adversary. It leads to around 600 ISIS fighters leaving Lebanon and the Lebanese army obtaining information about nine soldiers being held by the terror group.

November 4, 2017 – Hariri resigns in a televised address while in Saudi Arabia, saying he fears an assassination plot and accusing Iran and Hezbollah of meddling in the region.

November 21, 2017 – Hariri announces he has accepted Aoun’s wish for him to suspend his resignation to allow for more consultations on the reasons behind the move.

December 5, 2017 – Hariri rescinds his resignation after all factions of the Lebanese government – including Hezbollah, with whom he shares power – agree to stay out of regional conflicts, according to his press office.

December 13, 2017 – US Ambassador to Lebanon Elizabeth Richard announces that the United States will provide Lebanon with a package of military aid valued at more than $120 million.

May 6, 2018 – The first parliamentary elections in nine years are held. Fewer than half of registered voters turn out to cast ballots, according to the interior minister.

May 24, 2018 – Aoun announces that Hariri has won a third term as prime minister, having received backing from 111 politicians in the 128-seat parliament.

January 31, 2019 – Hariri announces that a new government has been formed after months of delays.

September 16, 2019 – The Special Tribunal announces new charges against Ayyash, one of the individuals indicted for the 2005 assassination of Rafik Hariri. The new charges pertain to a series of three deadly attacks on politicians in 2004 and 2005.

October 17, 2019 – A wave of massive protests begins in response to the announcement of austerity measures including a tax on WhatsApp calls. The government withdraws its tax proposal soon after the protests start.

October 21, 2019 – Hariri delivers a speech about economic reforms, including the scrapping of the austerity measures that prompted the protests. He also declares that his own salary will be cut. “To the protesters I say these may not satisfy your demands, but they satisfy mine,” says Hariri. “I’m not asking you to stop protesting. It’s a decision for you to make.”

October 30, 2019 – Aoun asks Hariri to stay on in a caretaker role until a new government is formed. Aoun says the protests have paved the way for reforms and declares the country will have a “clean government.”

January 21, 2020 – A new government is formed. Hassan Diab, a professor and former education minister, is named prime minister. He is appointed with the backing of Hezbollah, its allies, and the Free Patriotic Movement, a Christian political party.

August 4, 2020 – A massive explosion rips through central Beirut, killing more than 170 people and injuring thousands. The blast, which damaged or destroyed much of the Lebanese capital, is linked to a long-neglected stash of potentially explosive chemicals.

August 10, 2020 – Lebanon’s government steps down, less than a week after the explosion in Beirut which sparked days of violent protests. Diab addresses the nation, announcing his resignation and that of his government in the wake of the blast, which he called a “disaster beyond measure.”

July 15, 2021 – Hariri steps down after his proposal for a new cabinet is not accepted by President Aoun.

September 10, 2021 – A new government is formed, ending a more than year-long power vacuum. Prime Minister Mikati, a billionaire who has already twice served as premier, will lead a cabinet of ministers that will preside over an economic depression which the World Bank considers one of the world’s worst since the mid-19th century.

October 14, 2021 – A political dispute over a probe into Beirut’s August 2020 port blast prompts the worst violence Lebanon has witnessed in more than 10 years, after a protest descends into deadly street battles. At least six people are killed.

May 15, 2022 – Hezbollah loses its parliamentary coalition majority in an election that delivers significant gains to its rivals as well as to reformist political groups that sprung out of the 2019 nationwide demonstrations.

October 30, 2022 – Aoun vacates the presidential palace, leaving a void at the top. Parliament has so far been unable to agree on a successor in the role, which has the power to sign bills into law, appoint new prime ministers and green-light government formations before they are voted on by parliament.

Street Fighter 6: Second Closed Beta To Begin Later This Month And You Can Register For It Now